Kiunjuri bravely spoke of his tribulations in government after his sacking by the President.

• Uhuru kicked the Agriculture Cabinet Secretary out of his government in a move that may not have come as a surprise to many observers.

• In fact during a press briefing, Kiunjuri said he was not surprised at all that he had been sacked. 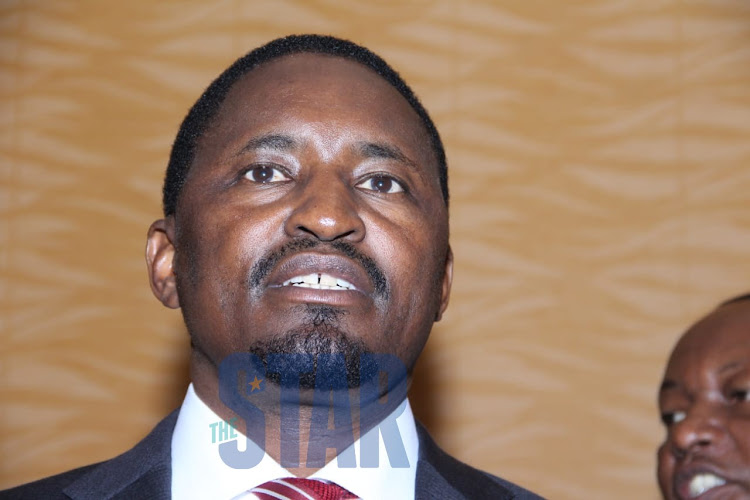 From a tout to the very top echelon in the government as a cabinet minister, Mwangi Festus Kiunjuri has been through it all.

Uhuru earlier this week kicked out the former Laikipia East MP from his government in a move that may not have come as a surprise to many observers.

By his own admission, Kiunjuri himself said he was not surprised at all by his sacking.

"The President’s decision has taken me by no surprise. I thank God. I feel relieved. Having in the recent past gone through a most difficult year that on a number of occasions threatened my energy and resolve. Some of you know I have endured a lot of humiliation that only God and my family know how this made me feel,” Kiunjuri said.

But in a defiant show of bravado, Kiunjuri maintained that despite his sacking, he will be going nowhere.

On Tuesday, a brave Kiunjuri faced the nation and spoke of his tribulations in government after his sacking by President Uhuru Kenyatta from the Agriculture Ministry.

Kiunjuri was a marked man even before he was sacked on Tuesday by the president.

The president had on several occasions warned him over his 'underwhelming' show at the helm of the Agriculture Ministry.

The humiliation was made worse by an angry President lashing out at him publicly before the full glare of the cameras for all Kenyans to see.

On March 23, 2019,  the President publicly bashed Kiunjuri and some of his cabinet secretaries for "lack of seriousness".

"I am looking at my brother Mwangi Kiunjuri who has just opened his notepad to write what I am saying. But he was not interested in writing what these Kenyans are saying," Uhuru said.

Uhuru was speaking during his trip to Namibia. The President said Kiunjuri was not writing notes since what the Kenyans were saying was not related to his agriculture docket.

"He forgets that he is a minister of the Republic of Kenya and whatever that is said he should be interested to know what it is these people are telling us," Uhuru went further to say amid laughter from those present.

Months later, Uhuru blamed Kiunjuri for the agony of maize farmers across the country.

The President scolded the CS, threatening to sack him over irregular payments made to fictitious suppliers of maize.

''I swear before God, you try that again and you will see what will happen to you. We have seen what you did and we will follow you. Government money belongs to the people. Pay farmers first,'' Uhuru said.

He was once more on the wrong side of the head of state during the Mashujaa Day celebrations in 2018 when the President yet again gave him a tongue-lashing.

''Kiunjuri, the time for play is over. You must find out who these cartels are and we will jail them. Lest you pay the price,'' Uhuru told him, referring to those behind the woes of Kenyan farmers.

Although Cabinet secretaries should not engage in politics, Kiunjuri intensified his political activities in Mt Kenya region.

Even as President Uhuru Kenyatta's succession politics intensify at the national level, the issue of who will step into his shoes in Mt Kenya has emerged.

While Kiunjuri has kept his cards close to his chest about his post-Kenyatta presidency plan, his prominent hand in organising Mt Kenya region leaders to take a position on the Building Bridges Initiative left no doubt of his growing influence.

When the BBI team announced in October that they had completed compiling the report, Kiunjuri quickly mobilised the Mt Kenya leaders for a meeting where they declared that they will oppose any changes.

Before venturing into politics, Kiunjuri taught at Kangema High School, Kiarithaini High School and Dr Kiano Boys School between 1983 and 1997.

The Moi University Bachelor of Education graduate quit teaching at Kiarithaini Secondary School, Nyeri county, in 1997 and was elected MP for Laikipia East on the Democratic Party ticket.

The outspoken politician was re-elected in 2002 and 2007 but lost in 2013 when he vied for Laikipia governor.

The former tout, who settled for the job despite having a degree, put down the chalk in 1997, quitting teaching to get into politics as MP for Laikipia East.

During his vetting for the position of Devolution CS, the 46-year-old revealed that he was only Sh200 million shy from joining the small club of Kenyan billionaires.

Without giving specifics, Kiunjuri declared that his vast wealth comes mainly from landholdings and buildings in Nanyuki, Sagana and Nairobi.

Before venturing into politics, the father of two taught at Dr Kiano Boys School, Kangema High School and Kiarithaini High School between 1983 and 1997.

Kiunjuri is seen as a political asset to President Uhuru Kenyatta, despite not joining TNA but choosing to remain in GNU with Nyeri Governor Nderitu Gachagua in 2013.