• The northern white rhino in-vitro fertilisation project is led by a consortium of scientists and conservationists from Kenya, the Czech Republic, Germany and Italy. 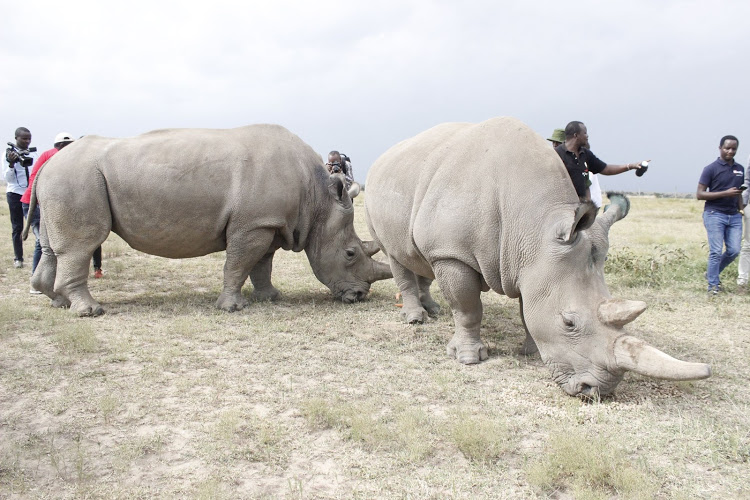 Efforts to save the near-extinct northern white rhino are paying off after another embryo was created last month.

This brought to three the number of embryos created in a laboratory since August 22, 2019, when a team of scientists and conservationists broke new ground to save the species.

Yesterday, the international scientists and conservationists jointly declared that the December 17 procedure was successful.

"This significantly increases the chances of successfully producing offspring. The procedure has proven to be safe and reproducible, and can be performed on a regular basis before the animals become too old. Preparations for the next steps of the northern white rhino rescue mission are underway," they said in a statement.

Tourism Cabinet Secretary Najib Balala said excitedly: "This is a big win for Kenya and its partners as the northern white rhinos are faced with extinction. Only two of them, females Najin and Fatu, are left in the whole world and are currently hosted by Kenya."

The northern white rhino in-vitro fertilisation project is led by a consortium of scientists and conservationists from Kenya, the Czech Republic, Germany and Italy.

The three embryos are ready for implantation in southern white rhino as surrogate mothers in coming months.

"For that, we thank the concerned parties, the Kenya Wildlife Service, Ol Pejeta Conservancy, Leibniz Institute for Zoo and Wildlife Research, Avantea Laboratory and Dvůr Králové Zoo, for putting in all of their efforts in ensuring that the critically endangered species do not disappear from the planet under our watch," Balala said.

The CS urged scientists to continue digging deeper into technology and innovations to ensure that not only this concerned species does not go extinct, but other species that are faced with similar threats.

"The fact that Kenya is at the centre of this scientific breakthrough also makes me very proud. It’s amazing to see that we will be able to reverse the tragic loss of this sub-species through science.”

The delicate procedure involves the selection of a group of southern white rhinos at Ol Pejeta Conservancy from which a female will serve as a surrogate mother for the northern white rhino embryo.

To achieve the best possible results for work with pure northern white rhino embryos, the team relies on experience from similar embryo transfer procedures in southern white rhinos that have been performed to address reproduction challenges in European zoos.

Despite the fact that more research is still needed, the team expects that a first attempt for this crucial and never-before-achieved step may be undertaken this year.

His sperms had been extracted and frozen and were in December 2019, taken to Germany for production of more embryos.

However, as the semen was collected in 2014 when Sudan was already over 40, it is necessary to test it first and then see whether it can be used for the purpose.

In 2009, Sudan and Suni, another male, alongside two females – Sudan’s daughter Najin and granddaughter Fatu – were relocated to Kenya from the Czech Republic.

Scientists created the two embryos using eggs collected from Fatu, the youngest of the two northern white rhinos and frozen sperm from Suni. The eggs were matured and fertilised with sperms from Suni and another male Saut. Suni died of natural causes in 2014.

Seven other white rhinos were moved from the Dvůr Králové Zoo in the Czech Republic in 2009, but they struggled to produce an offspring.

Although mating was witnessed, there were no pregnancies.

The concerted efforts to save the species started after the deterioration of Sudan's health early in 2018.

Jan Stejskal, Dvůr Králové Zoo's director of International Projects, said they don’t know how many embryos will be needed to achieve a successful birth of a northern white rhino calf.

"That’s why every embryo is so important and why a long-term cooperation between scientists, experts in zoos and conservationists infield is a crucial element if we want to give hope to a species that would otherwise go extinct in few years.”

Breakthrough: Embryos to be implanted in surrogate to save species.
News
3 years ago
Post a comment
WATCH: The latest videos from the Star
by GILBERT KOECH News Reporter
News
15 January 2020 - 22:00
Read The E-Paper