Mt Kenya succession, the Ruto factor and the firing of Kiunjuri

• After the BBI, Kiunjuri also mobilised over 57 MPs from Mt Kenya and even those from outside the region but have roots in Central for a retreat in Embu county.

• The leaders concluded that Parliament was the only way to implement the report as opposed to a referendum, which is being championed by Raila Odinga and his brigade. 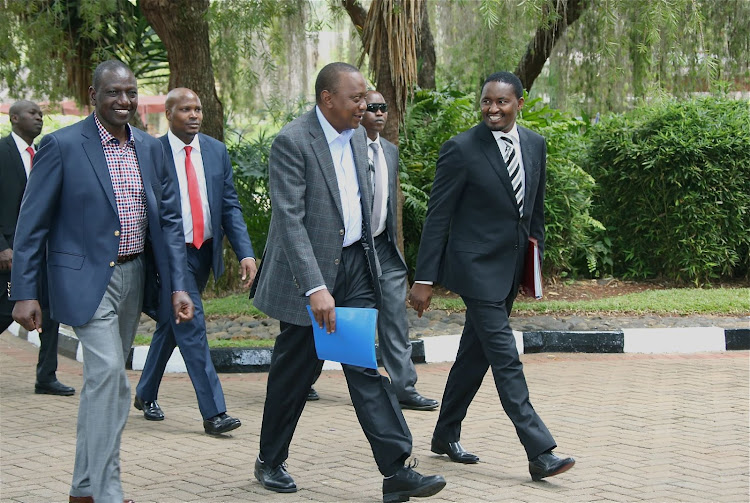 "I am a politician, trader and former teacher. I do not know why they think they can intimidate me...".

These were the words of Festus Mwangi Kiunjuri on May 27, 2018, as some called for his resignation over an alleged maize scandal at the National Cereals and Produce Board.

On Tuesday, President Uhuru Kenyatta kicked the Agriculture Cabinet Secretary out of his government in a move that may not have come as a surprise to many observers.

Kiunjuri has been seen as a key contender in taking President Uhuru Kenyatta's mantle as the Mt Kenya kingpin ahead of the next election.

In addition, he has come under criticism for the woes that have been facing farmers in Uhuru's backyard as well as across the country.

The fact that Uhuru spent the better part of his speech addressing the sector, for keen observers, it was time for Kiunjuri to go.

In the Ministry of Agriculture, he has been faced with a lot of challenges, including the recurring maize crisis, fluctuating tea prices, importation of cheap milk and eggs that have flooded the market, dealing a blow to local farmers.

Kiunjuri has also had to deal with the storm that erupted in the wake of the ailing sugar sector, which has resulted in several state-owned sugarcane millers closing down.

The sacking of the CS comes at a time when he has been seen to be getting closer to the Deputy President William Ruto in matters Mt Kenya politics.

However, the two have been friends for longer than they have worked together in government.

Immediately after being appointed as CS, Kiunjuri was among politicians who were at The Hague to accompany Ruto during his no-case-answer oral submissions at the ICC.

Kiunjuri was also not among the group of CSs and PSs who were meeting in the infamous La Mada meetings where there was an alleged plot to tame Ruto.

There have also been several occasions in the recent past that politicians have been calling on Kiunjuri to take over the mantle from Uhuru ahead of the next election.

While some of his critics, especially those in the Kieleweke side of Jubilee, have accused him of undermining the president, Kiunjuri has severally maintained that he is offering solutions.

"I am loyal to the President and I don't think anybody will be offended by me offering a solution when called upon. I am a senior member of the community with vast experience in leadership," Kiunjuri said in a previous interview with the Nation.

After the 2017 election, Uhuru moved Kiunjuri to the Ministry of Agriculture in a mini-reshuffle.

At the time of his appointment in 2015, Kiunjuri was seen as Uhuru's favourite CS from the Mt Kenya region.

But things seemed to go the opposite direction as Uhuru publicly criticised the CS in public on several occasions.

The president previously reprimanded Kiunjuri over graft at the ministry after it emerged that cartels pocketed billions meant for genuine maize farmers.

At the 2018, Nairobi International Show, Uhuru publicly reprimanded Kiunjuri telling him to act on cartels or lose his job.

In August 2019, in a new executive order, Uhuru moved the lucrative irrigation department from Kiunjuri's Agriculture Ministry to the Water and Sanitation docket

As the country awaited the BBI report, Kiunjuri joined MPs from Mt Kenya in parliament as they demanded that the document must cater to the region's needs.

When the report was released, Kiunjuri yet again joined MPs from the region at a retreat in Embu where they took a regional position on the BBI.

It took a few days for Uhuru to respond to the group saying that there are people who are holding meetings and pretending to be speaking for the region.

"They see me silent and think ‘he is just there and knows nothing’. There is nothing I do not know and when the time comes, I know those who speak and they are not those who are speaking now," the President said on December 4 while speaking in Gatundu.

A few days before Nyeri Town MP Ngunjiri Wambugu, who has been a harsh critic of the CS, claimed that Kiunjuri had failed and it was time for Uhuru to sack him.

"Mwangi Kiunjuri is trying to provoke the President so that he can be fired, and then he can come to the Mt Kenya people as a victim and mobilise an as a renegade," Ngunjiri wrote on his Facebook on December 1.

In June last year, Ngunjiri and other pro-handshake supporters disrupted Kiunjuri's meeting in Nyeri accusing him of undermining elected leaders from the region.

For a man under fire, Kiunjuri has been known to speak his mind, especially while addressing Mt Kenya residents mostly in speeches laced with Kikuyu proverbs and idioms.

In his most recent speeches that caught the attention of many, Kiunjuri warned that the region would be rudderless politically if something was not done.

"As a people with great interest in our community, we must sit and open our eyes wide. It will reach a time when we will get spat upon," he said in Kikuyu on December 30, 2019, during the burial of his friend Batista Maina in Meru county.

Kiunjuri said lack of preparations for the presidency in the 2022 General Election is a tall order for the region.

"You cannot remove your house's roof during rains but during the dry season. We are saying let it rain, they will come and roof our house for us. As Mt Kenya region, we are contented saying let them take control. We are exposed, giving an opportunity to intruders —any bird can build its nest,” Kiunjuri said in Kikuyu parables.

His docket has also been a nightmare for him especially being put on the spot over farmers' earning in the various sub-sectors.

Last year, he was at loggerheads with Strategic Food Reserve board chairman Noah Wekesa over planned maize imports.

Kiunjuri said that only the ministry is mandated to comment on maize imports.

He said Wekesa's claims that the country needed to import only two million bags of maize were reckless and amounted to insubordination.

Some political observers note that Kiunjuri has taken up what appears to be a leadership vacuum in Mt Kenya as Uhuru focuses on his national agenda.

"In my view, Kiunjuri brings about a level of experience that few politicians have in Mt Kenya. He has a knack on the political language that sets him apart from the rest. He knows how to work the crowd. A key component when it comes to leadership," Political analyst Gabriel Muthuma told the Star a week ago.

On his part, USIU lecturer Prof Macharia Munene said while Uhuru will still be influential in Mt Kenya even after retiring in 2022, Kiunjuri has proven he has what it takes to lead the region.

“Kiunjuri is a foresighted leader and a politician who has matured over time. There is some element of desperation in the region on who will take over from Uhuru and Kiunjuri has seen that opportunity,”Munene said.

But who is this man Kiunjuri?

The former tout, who settled for the job despite having a degree, put down the chalk in 1997, quitting teaching to get into politics as MP for Laikipia East.

During his vetting for the position of Devolution CS, the 46-year-old revealed that he was only Sh200 million shy from joining the small club of Kenyan billionaires.

Without giving specifics, Kiunjuri declared that his vast wealth comes mainly from landholdings and buildings in Nanyuki, Sagana and Nairobi.

Before venturing into politics, the father of two taught at Dr Kiano Boys School, Kangema High School and Kiarithaini High School between 1983 and 1997.

The Moi University Bachelor of Education graduate quit teaching at Kiarithaini Secondary School, Nyeri county, in 1997 and was elected MP for Laikipia East on the DP ticket.

The outspoken politician was re-elected in 2002 and 2007 but lost in 2013, when he vied for Laikipia governor.

Kiunjuri is seen as a political asset to President Uhuru Kenyatta, despite not joining TNA but choosing to remain in GNU with Nyeri Governor Nderitu Gachagua in 2013.

Those in the know say Uhuru and Kiunjuri are good friends who have for years shared political ideas, especially in relation to Central Kenya politics.

It is said Kiunjuri had been lined up as one of Uhuru’s witnesses should his case at the International Criminal Court have gone to trial.

ICC prosecutor Fatou Bensouda had said Kiunjuri was among the politicians Uhuru used to distribute money to Mungiki members to carry out retaliatory attacks.

Despite being GNU party leader, Kiunjuri asked his supporters to vote for Uhuru but told TNA to keep off his party’s affairs.

“We are not fighting Uhuru but it is wrong for TNA officials to insist that we dissolve our parties and go for joint nominations. Since we do not have a presidential candidate, the man we will support is Uhuru, unless Uhuru himself comes out openly to say that he does not need our support,” he said on September 21, 2012.

But in 2014 Kiunjuri for the first time publicly declared it was time to dissolve GNU and join Uhuru’s Jubilee coalition.

“Our dog did not bring anything home after we went for the hunting expedition. Let us now support the President and governors in their development agenda. TNA is a good party because it is the President’s party,” Kiunjuri said at Mt Kenya Primary School in Nanyuki town on March 8 last year.

GNU is one of the outfits that formed Uhuru’s new Jubilee Party ahead of the 2017 elections, when the President will be seeking a second term.

Kiunjuri caused ripples in 2011 when he accused former minister Charity Ngilu and Water PS David Stower of sidelining him.

The then Public Works assistant minister said he alerted Ngilu about dubious tenders awarded by the ministry for several projects and consultancy services but she failed to act.

Kiunjuri has also previously held public office as assistant minister in the ministries of Water and Irrigation, and Energy.

He once served as the organising secretary of the Democratic Youth Congress, representing the party at the International Democratic Union Conference in the United States in 2002.

Kiunjuri served as chairman of the Democratic Youth Initiative, and as vice chair of the Parliamentary Investment Committee during his first term.

Uhuru said Kiunjuri was not writing because it was not related to agriculture.
News
2 years ago

CS has intensified his political activities in Mt Kenya, giving indications of a 2022 run.
News
2 years ago

Kiunjuri, from tout to minister

Mwangi Kiunjuri, the man who takes over at the Ministry of Devolution and Planning, has been much talked about since he was nominated, with good ...
News
6 years ago
by OLIVER MATHENGE Digital Editor
News
14 January 2020 - 14:03