Joho says Coast region will support BBI, calls for unity ahead of 2022

Says addressing historical injustices is important for the future of the region, as well as how Coast will move away from economic marginalisation.

• Joho said when BBI goes through will give an opportunity for the minority to be in the top leadership of the country.

• Adds that addressing historical injustices is important for the future of the region, as well as how Coast will move away from economic marginalisation. 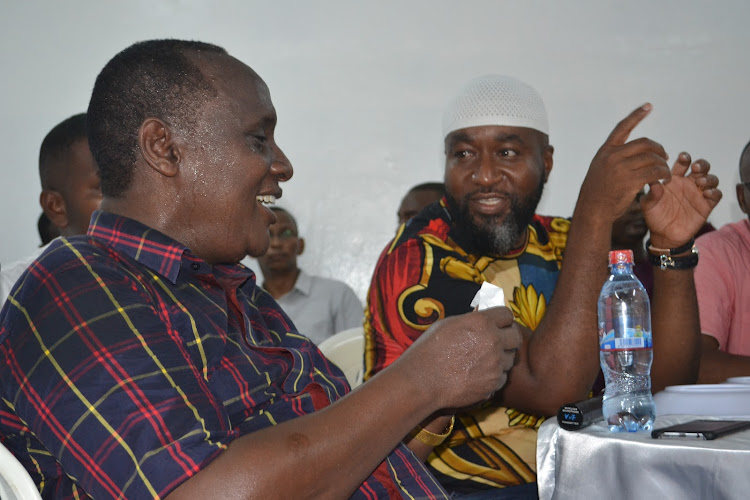 Mombasa Governor Ali Hassan Joho says the Coast region will support BBI as it will give an opportunity for the minority to take the country's leadership.

Joho said leaders from the region will educate residents on the importance of supporting the  BBI so as not to be left behind when the constitutional changes take effect.

Speaking during the wedding of Devolution Chief Administrative Secretary Hussein Dado's son in Malindi, Joho said what was important is to make sure their demands are factored in the BBI report.  DPP Noordin Haji was in attendance.

Joho said addressing historical injustices is important for the future of the region, as well as how Coast will move away from economic marginalisation.

"The most important thing as you go back home is that this time round, as Coast region, let's go together. We should forget about political parties and an individual. Let's concentrate on how our region will be counted," he said.

Joho said when BBI goes through, it will give the minority an opportunity to be in the top leadership of the country.

The governor said he has told those behind the BBI to ensure the region is on the team that will be counted during the formation of the post-2022 government.

The ODM deputy party leader further said they believe as a region,a time will come for one of them to become Kenya's President.

"So I want us to be united its God's command. Differences may constantly be there but let's have the urge to forgive each other and move together for the sake of success," he said.

Dado also endorsed the initiative, saying they want Joho to represent the Coast region at the national level after completing his two terms.

"We shall also return to the grassroots to serve wananchi and then move upwards. What I am telling you is that if a coastarian will not be on the table of formation of the government, there is a problem,'' he said.

"Back home in Tana River, we urge the leaders in power to work and stop looking for excuses".

Wario said they support the BBI and it will pass by whichever way, be it through the referendum or through Parliament because it aims at bringing Kenyans together.

"If our President, Uhuru Kenyatta, and Raila Odinga are united, what is remaining the rest of us to follow their footsteps," he said.

Kipini West MCA Musa Wario said they will follow the direction of the top leadership of the region led by Joho as far as BBI is concerned.