• Swarms of the desert locusts have been reported to be moving southwards from Samburu and Isiolo counties with fears Meru and Laikipia counties would be affected. 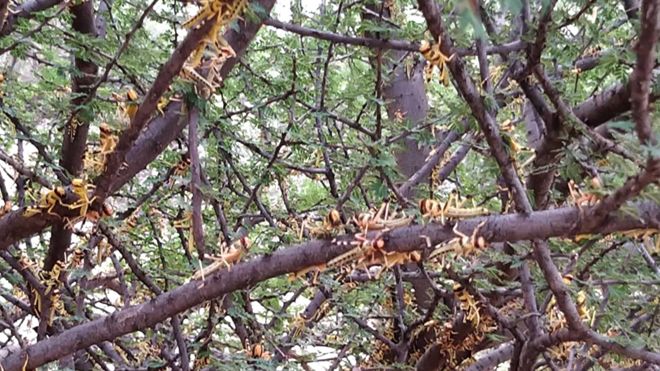 A photo of locusts on trees in Ethiopia
Image: BBC

Laikipia County Government is on high alert over a possible desert locust invasion.

County Executive Member for Agriculture Dr Lucy Murugi in a statement said the county is collaborating with the county governments of Isiolo and Samburu, private sector as well as the Northern Rangeland Trust to monitor and control the locust which have spread to Kipsing area in Isiolo.

Swarms of the desert locusts have been reported to be moving southwards from Samburu and Isiolo counties with fears Meru and Laikipia counties would be affected.

"The three county governments have officially authorised the firm to immediately commence the spraying," she said.

Murugi added, "The spraying exercise is targeting one main concentration of locusts in Kuipsing which is closest to Laikipia".

She said the county has increased surveillance across the county and on its borders with neighbours.

"All our agricultural officers have been put on high alert and asked to report any sighting of these destructive locusts on a daily basis," she said.

On Friday the government dismissed reports that desert locusts had spread to Meru county.

Agriculture CS Mwangi Kiunjuri said insects being mistaken for desert locusts were long-horned variegated grasshoppers that have always existed in the country.

He said the species have since multiplied due to weather changes.

The ministry, however, received reports on Friday that the desert locusts had spread to Samburu. The affected counties are Mandera, Wajir, Marsabit, Garissa and Isiolo.

“It is important that we alert all Kenyans that not all grasshoppers are desert locusts,” Kiunjuri said.

He asked Kenyans to take photos of insects they think are locusts so the ministry can help them identify whether they were locusts.

“If you see any insect that you suspect could be a locust, take a picture and post on social media so we can confirm for you what insect it really is,” Kiunjuri said.

The ministry announced that the focus will be attacking the swarms of locusts while they are resting as it will be an exercise in futility to attack them while on the move.

CS says local species have been mistakenly claimed to be desrt locusts in Meru.
News
2 years ago

Earlier in the week Entomologists said the more it rains, the faster the desert locusts will spread across the country, an entomologist has said.

Entomological Society of Kenya chairman Muo Kasina warned that the locusts which have invaded Mandera, Wajir, Marsabit, Isiolo, Garissa and Meru could move to other counties.

“As they fly, chances are that they are mating and they will breed locally. These insects are likely to identify suitable habitats where the populations are likely to multiply,” he said.

In February last year, the UN-Food Agricultural Organisation issued an alert about the invasion of the desert locusts first reported in Yemen.

The locusts then spread to the Horn of Africa invading Somali, Ethiopia and Eritrea before crossing into Kenya on December 28.

Kasina said the rainy season is favourable for the breeding of the locusts.

It will be difficult to eradicate the locusts if neighbouring countries like Somalia do not have effective ways to control the swarm, he said.

The adult desert locust is pink when not yet ready to lay eggs and take two weeks to mature then they turn yellow, he said.

The rainy season is favourable for the breeding of the locusts and hatching of locust.
News
2 years ago
Post a comment
WATCH: The latest videos from the Star
by PATRICK VIDIJA Investigative Journalist
News
11 January 2020 - 18:58
Read The E-Paper