The rainy season is favourable for the breeding of the insects and hatching of their eggs.

• In February last year, the UN-Food Agricultural Organisation issued an alert about the invasion of the desert locusts first reported in Yemen.

• The locusts then spread to the Horn of Africa invading Somali, Ethiopia and Eritrea before crossing into Kenya on December 28. 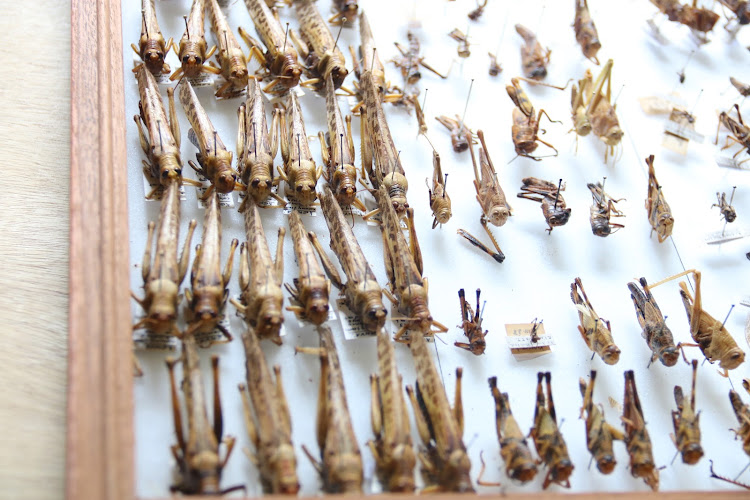 Desert locusts type that are currently invading parts of the country preserved at the Nairobi National museum.
Image: WILFRED NYANGARESI

The more it rains, the faster the desert locusts will spread across the country, an entomologist has said.

Entomological Society of Kenya chairman Muo Kasina warned that the locusts which have invaded Mandera, Wajir, Marsabit, Isiolo, Garissa and Meru could move to other counties.

“As they fly, chances are that they are mating and they will breed locally. These insects are likely to identify suitable habitats where the populations are likely to multiply,” he said.

Kasina spoke yesterday during a press briefing at the National Museum of Kenya in Nairobi.

In February last year, the UN-Food Agricultural Organisation issued an alert about the invasion of the desert locusts first reported in Yemen.

The locusts then spread to the Horn of Africa invading Somali, Ethiopia and Eritrea before crossing into Kenya on December 28.

Kasina said the rainy season is favourable for the breeding of the locusts.

It will be difficult to eradicate the locusts if neighbouring countries like Somalia do not have effective ways to control the swarm, he said.

“After mating, the males die leaving the females to lay eggs. The eggs hatch in two-three weeks and the larva takes two to three weeks to become adults,” he said.

The adult desert locust is pink when not yet ready to lay eggs and take two weeks to mature then they turn yellow, he said.

“When the conditions are right, the population can explode very fast. The locusts travel by wind and can go at least 150-200km in a day,” he said.

The society urged the government to work with counties in the affected areas to identify potential breeding habitats and target them for management.

“Focus on the potential breeding habitats and kill the populations that emerge from them. This will ensure we don't allow the eggs laid in the country to hatch and affect vegetation,” Kasina said.

The government and the Desert Locust Control Organisation of East Africa have been working together to provide aerial spray to control the locusts.

John Nderitu, an insect scientist from the University of Nairobi, encouraged the use of a combination of pest management methods to limit the population.

“We recommend pulling together of different methods to ensure we manage the insects including mechanical and chemical control as well as traditional methods such as harvesting the insects for food and scaring them away,” he said.

Nderitu assured Kenyans that the chemicals being used to spray the locust are safe for the environment and humans.

Post a comment
WATCH: The latest videos from the Star
by AGATHA NGOTHO Science Writer
News
09 January 2020 - 23:00
Read The E-Paper