• Spokesman says doctor at first refused to meet relatives but later admitted to having administered an injection. 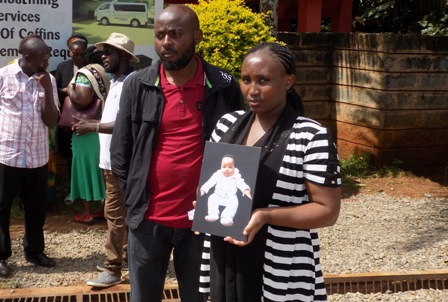 An Embu family whose 11-month-old baby died immediately after allegedly receiving an injection is seeking justice.

Joseph Njuki and his wife Joyce Muthoni are calling on the DPP and the Doctors and Dentists Board among others to investigate and take action against a private Nairobi hospital. They said their son Ethan Mwaniki died immediately after being injected with adrenalin by a doctor.

They said their son had breathing problems at about 3am on Tuesday. His mother rushed him to the hospital (name withheld owing to legal reasons) where he was given first aid. He was then admitted.

Speaking to the press on Tuesday on behalf of the family, Baby Ethan's paternal uncle Justine Mwaniki said that according to Muthoni, the baby was first treated with antibiotics before he was admitted.

Mwaniki said at around 8am, the doctor who was on shift duty, injected the boy with the drug, which she later admitted was adrenalin, before the child collapsed. He said the doctor said she tried all manner of efforts to resuscitate the boy before she informed his mother of his death.

“We suspect the boy died from an overdose of the adrenaline which he was injected with on the leg or negligence on the part of the health workers who handled the boy,” Mwaniki said.

He spoke to the press at Gakwegori Funeral Home where the family, relatives and friends had gathered for the postmortem. Burial was later at their Kithimu location home in Embu West subcounty.

Mwaniki said Muthoni called him and other relatives and on arrival at the hospital, the doctor alleged to have injected the child at first refused, then agreed to met them.

At that meeting she admitted having injected the baby with the adrenaline and also said the child could have been having heart complications before the injection, he said.

Mwaniki said the family is bitter at the "suspicious, incompetent and negligent manner" in which the child was treated.

He said the mother tried to have the child given lime water but asserted that the nurse ignored her as she listened to music on earphones.

“We need justice for our baby by having the government act upon the responsible medics, through the intervention of DCI, DPP, medics' board and others so that we also prevent such actions against other people in future," Mwaniki said.

Pathologist Dr Moses Njue, who performed the postmortem in the presence of government officers, said he had sent samples to the Government Chemist for further analysis. He declined to disclose his initial findings owing to medical regulations’ restrictions.

He said, however, that the drug the family claimed was used is very strong and that if used incorrectly, can cause the heart to stop immediately.

Post a comment
WATCH: The latest videos from the Star
by REUBEN GITHINJI Corespondent, Embu
News
31 December 2019 - 23:00
Read The E-Paper