• Some 250 journalists are being detained  in various prisons compared to 255 last year in the same period. 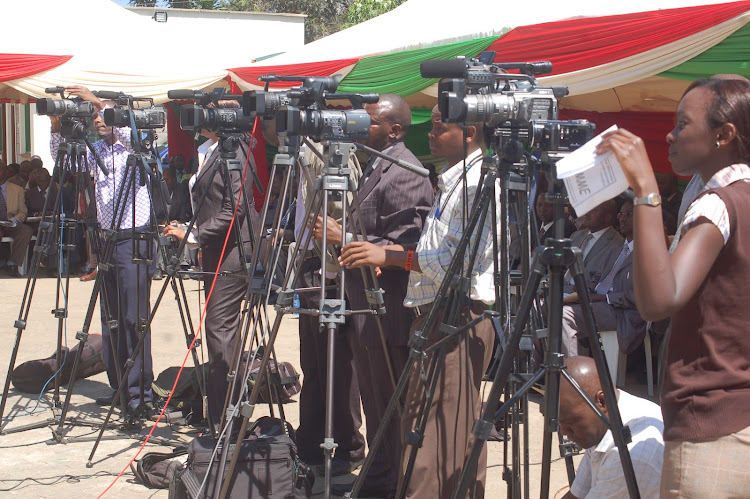 More than 200 journalists have been imprisoned in various prisons across the world over their work, a report by the Committee to Protect Journalists has said.

According to the report, by December 2019, some 250 journalists were in various prisons compared to 255 last year in the same period.

The report indicates the highest number of journalists imprisoned in any year since CPJ began keeping track is 273 in 2016.

The report ranks China and Turkey as the worst jailers of journalists.

This is followed by Saudi Arabia, Egypt, Eritrea, Vietnam, and Iran respectively.

“While  majority of journalists imprisoned worldwide face anti-state charges, in line with recent years, the number charged with “false news” rose to 30 compared with 28 last year,” the report indicates.

According the report, 98 per cent of the journalists jailed worldwide are locals covering their own country.

“Sixty six per cent of these journalists are detained on anti-state charges, 12 per cent on false news charges and 13 per cent detained on retaliatory charges,” the report indicates.

The report reveals that three of the four journalists with foreign citizenship are imprisoned in Saudi Arabia, and the fourth in China. 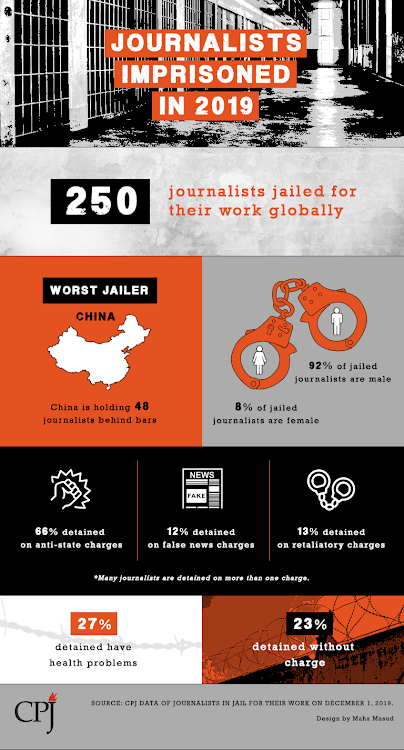 Twenty of the jailed journalists, or 8%, are female, compared with 13% last year.

While the report indicates that more than half of these imprisoned journalists are reporters publishing online, politics was the beat most likely landing them behind bars.

This is followed by human rights and corruption.

While China leads with the highest number of journalists behind bars at 48, Turkey comes second with 47 journalists followed by Egypt and Saudi Arabia with 26 journalists each.

“This year’s census marks the first time in four years that Turkey has not been the world’s worst jailer, but the reduced number of prisoners does not signal an improved situation for the Turkish media. Rather, the fall to 47 journalists in jail from 68 last year reflects the successful efforts by the government of President Recep Tayyip Erdoğan to stamp out independent reporting and criticism by closing down more than 100 news outlets and lodging terror-related charges against many of their staff,” the report reads in part.

It further reads, “With the industry gutted by government shutdowns and takeovers, and scores of journalists in exile, jobless, or cowed into self-censorship, authorities on October 24 enacted a legislative package that granted new appeals on convictions for certain offenses -- including “propaganda for a terrorist organization,” a favorite charge of prosecutors -- and shortened some pretrial detention periods”.

The report reveals that authorities in Saudi Arabia, where the number of journalists jailed has risen steadily since 2011 -- also targeted several journalists who had apparently ceased working.

In 2019, the Gulf kingdom was holding at least 26 journalists behind bars, making it the third worst jailer alongside Egypt.

“Saudi authorities barely make any pretense of due process; no charges have been disclosed in 18 of the cases, and those who have been tried have been sentenced in a secretive and often rushed manner,” the report reads.

Arrests of these journalists are characterized with torture, beating and starving.

According to the report, a total of 1,359 journalists have been murdered across the world between 1992 and 2019.

This has also left 64 journalists missing. These the committee said though they are missing under unclear circumstances, they strongly believe their whereabouts is related to the nature of their work.

Most of them are said to have been investigating corruption.

The CPJ report indicates the motive of the death ranges from dangerous assignments, crossfire and murder.

“The number of journalists targeted for murder in reprisal for their reporting nearly doubled in 2018 from a year earlier, driving up the overall count of journalists killed on the job,” the report indicates.

The report said Afghanistan, where extremists have stepped up deliberate attacks on journalists, was the deadliest country and accounted for much of the increase.

At least 53 journalists were killed around the world between January 1 and December 14, 2018, of which at least 34 were singled out for murder. 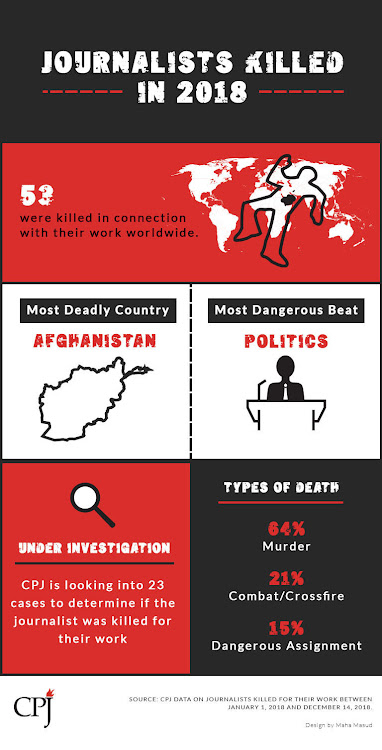 CPJ tracked  three types of journalist deaths on the job: reprisal murders; deaths in combat or crossfire (11 this year, the lowest since 2011); and deaths on other dangerous assignments, such as covering protests that turn violent (eight this year).

The total is up from 47 killed in all of last year, of which 18 were pinpointed for murder.

“The recent uptick in killings follows two years of decline, but comes as the jailing of journalists hits a sustained high--adding up to a profound global crisis of press freedom,” the report said.

The report further indicates that the context for the crisis is varied and complex, and closely tied to changes in technology that have allowed more people to practice journalism even as it has made journalists expendable to the political and criminal groups who once needed the news media to spread their message.

Another significant factor is a lack of international leadership on journalists’ rights and safety.

Eritrea and North Korea among 10 most censored countries

A special report by the Committee to Protect Journalists reveals that repressive governments use sophisticated digital censorship and surveillance alongside more traditional methods to silence independent media.

As a result, Eritrea remains the world's most censored country.

The list of 10 most censored countries the committee said is based on research into the use of tactics ranging from imprisonment and repressive laws to surveillance of journalists and restrictions on internet and social media access.

Other countries are Vietnam, Iran, Equatorial Guinea, Belarus and Cuba.

Under Article 19 of the Universal Declaration of Human Rights, everyone has the right to seek and receive news and express opinions.

“These 10 countries flout the international standard by banning or severely restricting independent media and intimidating journalists into silence with imprisonment, digital and physical surveillance, and other forms of harassment. Self-censorship is pervasive,” the report said.

CPJ said in the top three countries of Eritrea, North Korea, and Turkmenistan, the media serves as a mouthpiece of the state, and any independent journalism is conducted from exile.

The committee said the few foreign journalists permitted to enter are closely monitored.

Other countries on the list according to the committee use a combination of blunt tactics like harassment and arbitrary detention as well as sophisticated surveillance and targeted hacking to silence the independent press.

“Saudi Arabia, China, Vietnam, and Iran are especially adept at practicing these two brands of censorship: jailing and harassing journalists and their families, while also engaging in digital monitoring and censorship of the internet and social media,”  the committee said.

CPJ Kenya Representative Muthoki Mumo told the Star that Kenya and Uganda to not feature because they do not have any journalist behind bars.

She said Kenya has a robust local civil society that has always stood up to protest against any harassment on journalists.

Mumo said the voices of these civil societies are amplified by entities like the Media Council of Kenya and the Editors Guild which will always demand for answers anytime a journalist is caught up in a situation.

For Uganda, Mumo said though many journalists have faced frequent arrests especially during political rallies, the arrests are very brief and do not qualify what CPJ investigates.

Our worry is however the Cyber Security Act. We know the case is going into full hearing next year after it was challenged but it entirely depends on how the court will carry itself on the matter,” she said.

Mumo said the Act in its current form is likely to see many Kenyan journalists on the receiving end with regards to publication of fake news.

She said the criminal penalties contained in the Act are also a matter of great concern.

“We are seeing a trend where countries in the Sub-Saharan Africa want to control what people say on the online platforms. We saw Eritrea experience a total internet blackout, Uganda has imposed crazy taxes for online users,” Mumo said.

She said this is an indication that if no voice is raised, it would be difficult for journalists to operate if the Act is implemented.

BBC shuts office in Burundi after talks with government fail

There has been growing international concern about the freedom of the press in Burundi.
News
2 years ago

We need to see more being done to enhance better protection of press freedom; which is a human right.
Opinion
2 years ago

Viability and sustainability of the media are key issues as environment changes.
Opinion
2 years ago
by PATRICK VIDIJA Investigative Journalist
News
26 December 2019 - 06:00