BACK TO WHERE IT STARTED

Ruto spent his early days selling chicken to motorists at Kambi ya Kuku.

•On Thursday, the DP went back to where it all began and engaged the 'hustling' chicken sellers. 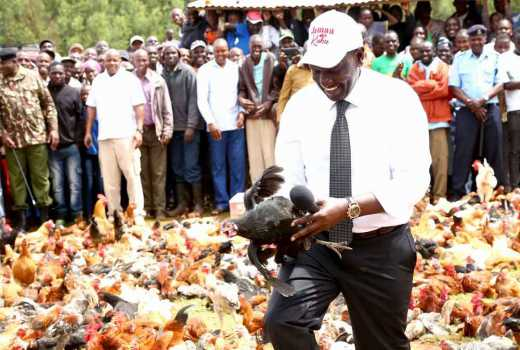 Ruto said he decided to launch the auction, in the area where he earned the nickname 'hustler', to boost poultry businesses by youth and women's groups.

Every life story has a beginning and the value of the tale is how far and how wide one goes from this starting point.

This contrast is typically used to define success and for Ruto, the beginning was a difficult one.

He spent his days selling chicken to motorists at Kambi ya Kuku, a makeshift marketplace built around the bumps along Eldoret-Malava road.

On Thursday, the DP went back to where it all began and engaged the 'hustling' chicken sellers.

He listened to their stories and launched an auction for them to sell their chicken at better prices.

In 2018 April, Ruto joined the farmers in a similar auction, bringing together  small-scale poultry farmers from Jua Kali, Turbo and their environs, with a total of 5,000 chickens sold at Sh1,200 each.

Ruto told the business people that the county government will help poultry farmers to form cooperative societies. This is so that middlemen, who exploit them by buying the chicken at lower prices, are eliminated.

The Deputy President noted poultry farming will lift women and youths out of poverty and improve their living standards.

“Even the richest man on earth, Bill Gates, agrees that it is through poultry keeping that we can eliminate poverty."

I have no apologies to make for being a hustler, says DP Ruto

Deputy President William Ruto has said he has no apologies to make for being a hustler brought up from a humble background. "I can account for any ...
News
6 years ago

We walked barefoot to school, Ruto's brother David opens up on tough childhood

He says his poor background helps him resonate with challenges in any part of Kenya.
News
2 years ago
Post a comment
WATCH: The latest videos from the Star
by LYNDSAY NYAWIRA News Reporter
News
19 December 2019 - 13:34
Read The E-Paper