• Farming of BT cotton will ensure farmers earn more from the crop through increased production.

• It will also boost the manufacturing pillar of the Big 4 Agenda where Kenya seeks to establish itself as a regional leader in textile and apparel production. 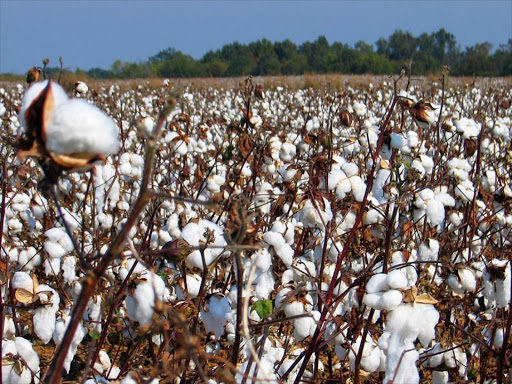 Cotton ready to be harvested in a farm
Image: FILE

The Cabinet on Thursday approved the commercial farming of BT cotton hybrids.

The meeting, chaired by President Uhuru Kenyatta at State House Nairobi, said the approval follows successful completion of field trials that were conducted over a period of five years.

Farming of BT cotton will ensure farmers earn more from the crop through increased production.

It will also boost the manufacturing pillar of the Big 4 Agenda where Kenya seeks to establish itself as a regional leader in textile and apparel production.

The commercialisation of BT cotton will increase production capacity and bring the country closer to realising its manufacturing goal, a key pillar of the Big Four Agenda.

Agricultural researchers had in October indicated that the BT cotton seeds will be made available to farmers in 27 cotton-growing counties, marking the end of an 18-year wait period.

The commercialisation is slated for March next year.

Adoption of the genetically modified variety, which is resistant to the destructive African bollworm, is also expected to lower the cost of production by 40 per cent.

Currently, a farmer is required to spray the crop about six times per season, while on average, it costs Sh1,500 per acre per session, which translates into Sh9,000, to fight bollworms, red mites and other pests.

The country currently produces an average of 25,000 bales against a demand of 200,000 bales of lint, with a deficit covered through imports from Uganda, Tanzania and the Far East to support the export processing zone (EPZ).

According to the Fibre Crop Directorate, the country has about 50,000 cotton farmers who are only able to produce 30,000 bales against an annual demand of 368,000 bales.

The farmers only use 10.04 per cent of 384,500 hectares suitable for cotton farming, producing 572 kilogrammes per hectare.

Recently, President Uhuru Kenyatta commissioned Rivatex Company, which was revamped to the tune of about Sh5 billion to promote the production of textile using locally available sourced cotton.

The meeting further approved the coming into operation of the New Kenya Planters Co-operative Union (KPCU) as well as the immediate operationalisation of the Coffee Cherry Advance Revolving Fund.

"Cabinet also discussed the issue of pending bills and reiterated that all arms of Government should move quickly to settle all bills that were audited and verified by the Office of the Auditor General," read a statement to newsrooms.

This also saw the establishment of an inter-agency team to verify historical pending bills worth Shs 40 billion within one month.

Farmers have to spend more to control the African bollworm and the mealybug.
Counties
3 years ago
Post a comment
WATCH: The latest videos from the Star
by PATRICK VIDIJA Investigative Journalist
News
19 December 2019 - 16:34
Read The E-Paper