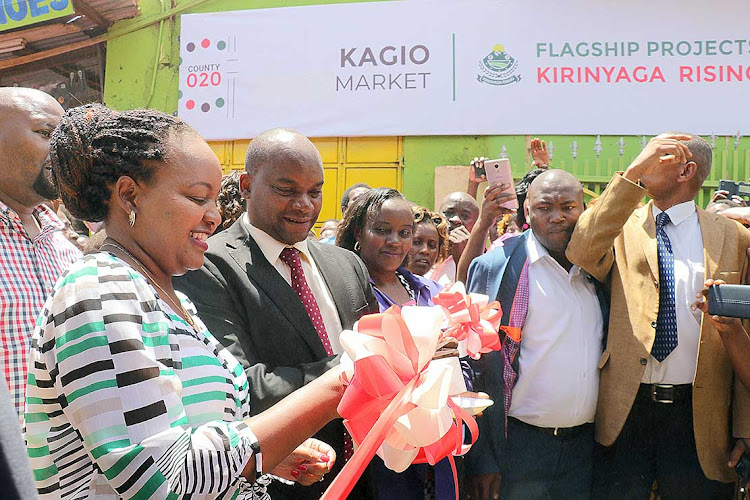 Kirinyaga governor Ann Waiguru has threatened to form a group to protect herself from hostile crowds in public meetings who have formed a habit of heckling her every time she tours the county.

The angry county boss said it had become impossible for her to hold public meetings around the county since her competitors had organized themselves to humiliate her and any person supporting President Uhuru Kenyatta.

Speaking  at Kiamutugu Secondary School in Gichugu constituency, the governor accused local Members of the Parliament for hireling goons to heckle her any time she organises a development meeting in the county

"That's why they have painted a picture that the ground has shifted and Central region is no more in  support  of President Uhuru Kenyatta or any person who supports the President," she said.

Waiguru singled out an incident last month in Gathuthini during a fundsdrive where nominated MP Maina Kamanda was forced to cut short his speech when rowdy residents heckled him after he failed to recognize Deputy President William Ruto as working with the President in Jubilee government.

She accused local administrators of failing to arrest individuals hireling goons to heckle her and demanded action against politicians who she didn't name for bankrolling the gangs to fight other leaders.

Accompanied by Deputy Governor Peter Ndambiri, Waiguru pointed  out that police should arrest and prosecute known criminals who were making their political life unbearable.

She told county commissioners Jim Njoka to rise to the occasion and order the arrest of the suspects before the matter gets out of hand.

Njoka said no one was above the law and assured the governor to calm down since he had taken over the issue to deal with political hooligans and politicians bribing youth to cause trouble in political gatherings.