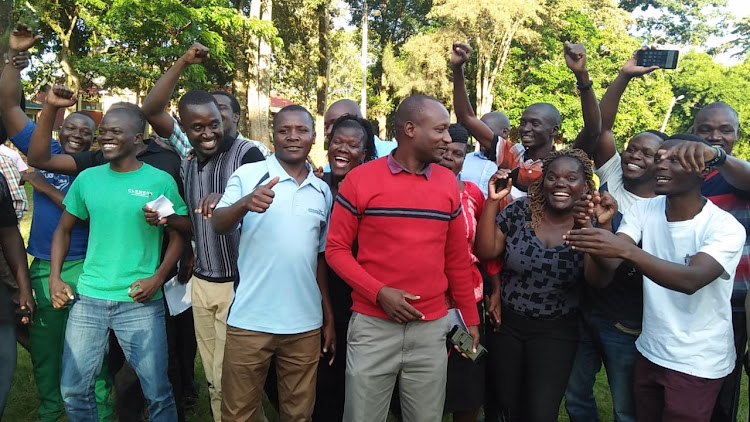 A total of 699,745 candidates sat the 2019 Kenya Certificate of Secondary Education.

The 14-day marking process in 27 centres started on November 28 and came to an end on December 12.

The marking process was disrupted by protests as markers demanded better pay.

The results came three days earlier than 2018 in which results were released on December 21.

Education Cabinet Secretary said the release of the results marks an end to four years under the examination reforms.

According to Magoha, 17 counties recorded the highest number of females.

He said some 16 subjects had indicated improvement, 11 declined while three did not indicate any sign of improvement or decline.

“I particularly wish to mention English, Kiswahili, chemistry, biology and physics as some of the critical subjects where performance significantly shot up in 2019 compared with 2018,” he said.

The exam saw a total of 627 candidates score A plain compared to 315 last year.

“This analysis explains why I started my speech by asking Kenyans to believe in the reforms that we have been conducting. That the overall performance of candidates has been increasing since we reformed the system of administering the examinations means that candidates have settled down to working hard on their own – under the leadership of their teachers – to prepare for examinations,” Magoha said.

Interestingly, candidates who scored less than 200 marks in the 2015 KCPE exam had performed tremendously well.

For instance Kinywa Milka Wanjiru who scored 179 marks was admitted at Gathara Secondary school where she scored a B-.

Munyoki Mwikali got 199 marks, admitted at Mama Malia secondary school and scooped a B-.

Sharon Chepkoech had 199 marks but scooped a C plus. 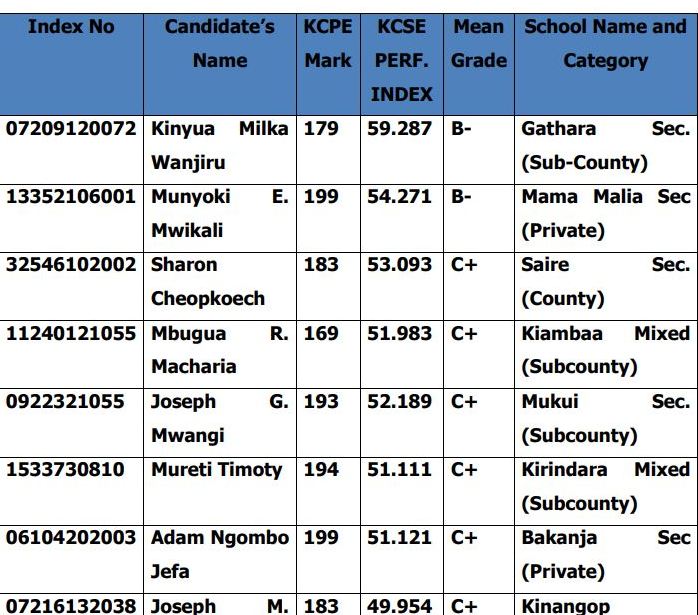 The best student was Tony Wabuko, from Kapsabet High School, who scored an A plain of 87.159 points.

Barasa Njeri of Kenya High School scored an A of 87.087 points.

Aboge Odhiambo from Kapsabet High School got an A of 87.080 points.

Anthony Owuor from Maseno School got an A of 87 points.

Natasha Wawira of Kenya High School got an A of 86.9 points.

While Kapsabet Boys produced the best candidate overall, Kenya High School ranked top with the highest number of candidates who scored an A. 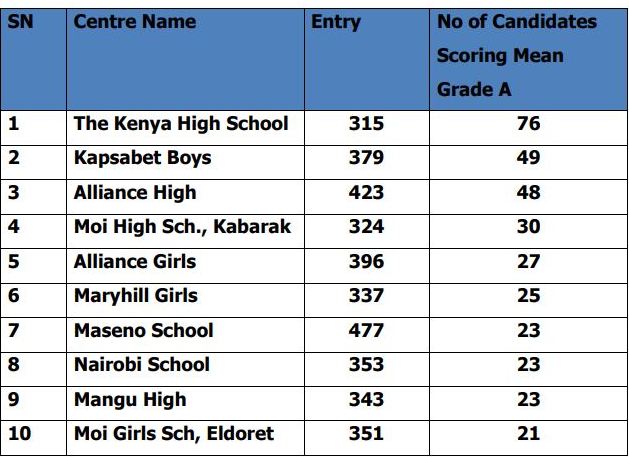 From the top ten list, no private school made it.

Magoha said results of 1,309 candidates have been cancelled for the involvement in various forms of cheating.

He however said cases of exam irregularities had reduced to 4,519.

“This is a clear indication that our teachers are complying with the new examination rules and guidelines to ensure integrity,” he said.

Kizito Sikuta top with an A as the youngest candidate with 16 years of age.

She was followed by Chepkemboi Keyline of Moi Tea, Njugua Winnie Wanjiku of Kenya High, Kore Rutto Dancan of Maranda and Tracey Wambugu of Maryhill Girls in second, third, fourth and fifth position.

The exam saw Knec cancel examinations results of 1,309 students after they were linked to cheating.

Magoha said the number however decreased from last year's 4,519 cancellations.

Magoha said  even though there were cases of cheating, there were  no incidences of exam leakages reported this year.

"I can say without fear of contradiction that there were no exam leakages this year," he said.

"Our enhanced measures to fight exam malpractices in schools have exceeded high measures of success. We have sanitsed our children; the issue of leakage before exams is now past tense."

He said a total of 100 phones were confiscated before they were used by  candidates. 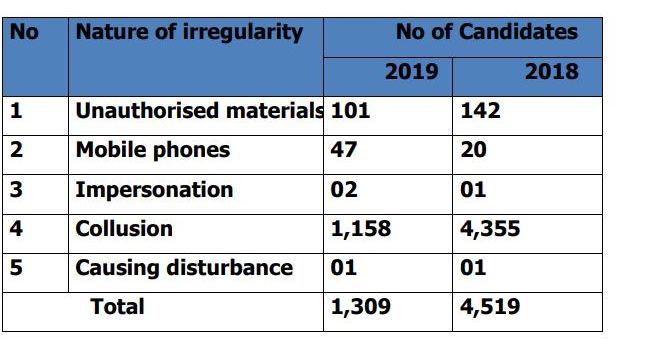