•Normal rains will continue over several parts of the country, but the cyclone will send a significant amount of rainfall into southwestern Kenya until Monday 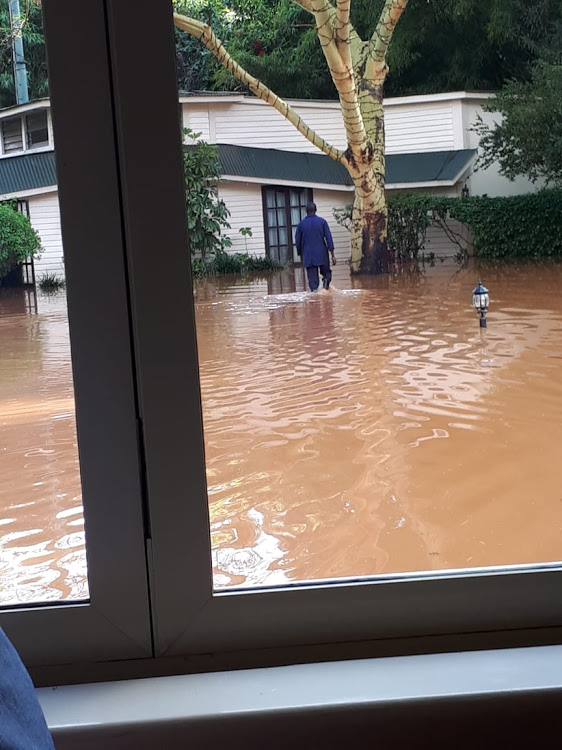 DEVASTATION: The Lord Errol Restaurant in Runda, Nairobi that was flooded on Tuesday, December 10, 2019. It will open immediately the floods rescind.
Image: COURTESY

The low-lying counties of Kajiado, Kitui, Makueni, Machakos and Taita Taveta have been put on alert after the monster tropical cyclone Belna made a devastating landfall in Madagascar.

The cyclone has sent heavy rains into the region including Kenya, experts say.

The cyclone has been weakening gradually but unexpectedly exploded in the last hours with the landfall on Monday evening.

"Belna is currently influencing the weather over Kenya indirectly, by creating favourable conditions for heavy rainfall in the southern parts of the country," head of the meteorological department Stella Aura said.

The department however assured that Kenya is largely safe because tropical cyclones do not form within five degrees north and five degrees south of the Equator.

While normal rains would continue over several parts of the country, southwestern Kenya would likely receive significant rainfall until Monday, Aura said.

She said the counties put on alert were likely to receive the heaviest rainfall.

Tuesday's morning downpour was spread across the country and disrupted transport in Nairobi and cut off roads in West Pokot.

In Nairobi, swampy areas around the United Nations Avenue were flooded.

The popular Lord Erroll Restaurant, in Runda Estate, associated with the family of Gideon Moi, was closed after being swamped with knee-high floodwaters.

Zahra Moi, the owner of the upmarket restaurant, explained that the flooding was a result of the nearby river breaking its banks.

“The flooding we have suffered is nothing compared to the devastating losses many Kenyans have suffered in the last few weeks. We would like to sympathise with them and hope that they will get some relief,” said Zahra.

Yesterday, pictures showed the restaurant's interior and the roads leading to it flooded.

In her forecast, Aura said Western Kenya might see a slight reduction of rains this week.

She said the Lake Victoria Basin and the Rift Valley highlands would experience morning rains over few places while afternoon showers and thunderstorms are likely to occur over several places throughout the forecast period.

"Showers and thunderstorms are expected over few places at night throughout the forecast period," she said in the weekly forecast.

Central Kenya counties of Nairobi, Embu, Meru and Nyeri will have showers over few places during the night except on Monday when partly cloudy conditions are expected.

She said the Coastal Strip is likely to experience morning and afternoon showers over few places throughout the forecast period.