They say IEBC remains in crisis almost two years after resignations of its commissioners.

• She aid although the referendum route should be more preferred, the composition of the IEBC remains in crisis almost two years after resignation of the commissioners. 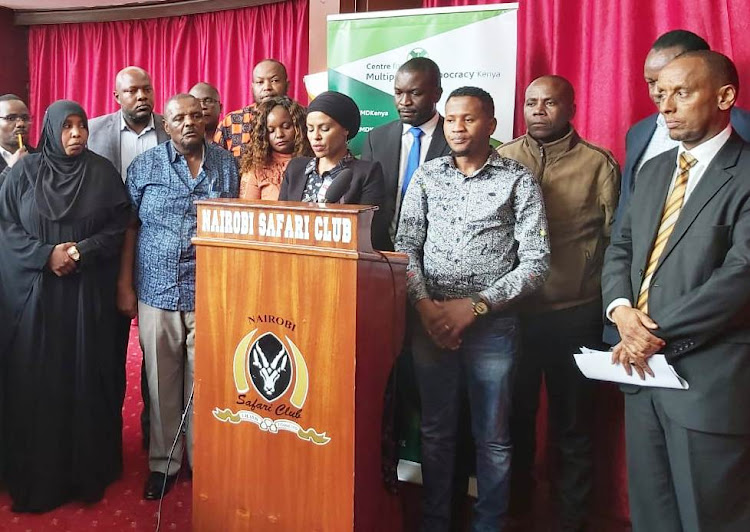 Membership of the Multi-Party Democracy led by chairperson Senator Abshiro Sako during a briefing with Journalists
Image: COURTESY

Political parties now say reforms at the IEBC should be excluded from the ongoing BBI debate.

The Centre for Multi-Party Democracy (CMD-Kenya) on Wednesday said the issue of comprehensive electoral reforms, mainly reforms in the electoral body management should be separated from the glamour for re-constitution or disbandment of the IEBC.

CDM-Kenya has a membership of over 20 political parties from across the political divide.

Speaking to Journalists at a Nairobi hotel, the chairperson Senator Abshiro Halake said disbandment of IEBC must take a constitutional path stipulated in Article 251 unless the current IEBC members voluntarily resign.

Abshiro said the BBI debate seems to be headed towards a referendum, which is a long route to nation-building.

She said although the referendum route should be more preferred, the composition of the IEBC remains in a crisis almost two years after resignation of four of its commissioners.

The nominated senator said the country since the re-introduction of multi-party politics has continued to suffer from inconclusive electoral reforms which have been skewed or stalled under various cycles.

"We wish to state that reforming the IEBC must be fast-tracked as the 2022 election nears. We recommend the immediate and comprehensive reforms of the IEBC in line with the recommendations of the Kriegler Commission,” Abshiro said.

She said the country has almost two years to the 2022 general election and comprehensive reforms at the electoral body will ensure an accurate and verifiable principal register of voters is prepared in time.

Abshiro said while the political parties appreciate that the BBI report raises fundamental reform issues that will necessitate constitutional change, Parliament should immediately enact a referendum law to guide the process should Kenyans opt for the constitutional amendment through a popular initiative.

“We strongly recommend that Kenyans get the opportunity to decide on any constitutional changes as contemplated in Article 255 of the constitution,’ she said.

Abshiro added, “The CoK 2010 delineates that constitutional amendment touching on the functions of Parliament, the independence of the judiciary and state commissions and the objects and structure of devolved government be approved by voters in a referendum”.

The BBI report that was launched last month by President Uhuru Kenyatta has seen sharp divisions among the political circles.

While some politicians want the report implemented by the Parliament, others have opposed saying it is people-oriented and thus must be implemented through a referendum.

But National Assembly Speaker Justin Muturi said the report cannot be introduced in Parliament in its current form.

Muturi on Monday said the document has to be converted into a Bill or policy for it to get its way into Parliament.

"We haven't reached there yet. It (the report) is still very embryonic by way of being a legislative document... Whichever method - through a parliamentary or a public initiative from the people like the Punguza Mizigo - even if there are those proposals in the report, they have not been reduced into something that can be legislation," he said.

Muturi: Why BBI should go to the people

Speaker says no constitutional amendment passed in Parliament since 2013.
News
1 year ago

Convert BBI into Bill, policies before bringing it to MPs - Speaker Muturi

Politicians allied to DP Ruto have been opposed to a referendum.
News
1 year ago
by PATRICK VIDIJA Investigative Journalist
News
05 December 2019 - 08:58