Ruling on lawyer in Obado's case set for December 18

Obado wants Wajackoyah barred from participating in the proceedings

• Obado says Wajackoyah has privileged information about him and might use it against him.

• But Wajackoyah, through lawyer Duncan Okatch, says Obado’s intention is to re-victimise the victims and to scuttle the trial. 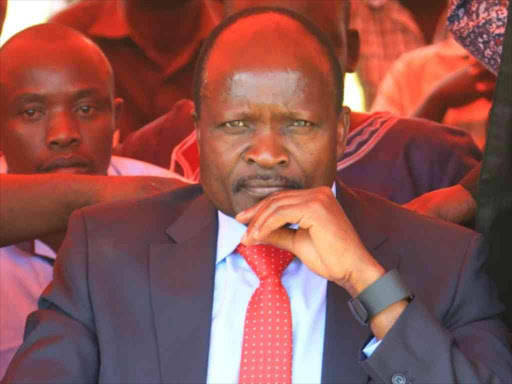 The High Court will on December 18 rule on whether it will disqualify a lawyer acting for the family in the murder trial of Rongo University student Sharon Otieno.

Parties argued out the application on Monday, with Migori Governor Okoth Obado maintaining that Prof George Wajackoyah holds privileged information and may use it against him. Obado wants Wajackoyah debarred from participating in the proceedings.

Obado, through lawyers Kioko Kilukumi and Rogers Sagana, told Justice Ngenye Macharia that on September 23 last year–two days after his arrest–Wajackoyah paid him a visit at the Gigiri police station and sought his instructions on the case.

Kilukumi said Wajackoyah told his client he had done a lot of consultancy work with the office of the Director of Public Prosecutions and the Directorate of Criminal Investigations.

“Wajackoyah showed me correspondence between himself and the two offices, and I was convinced that indeed he had good knowledge of criminal law practice. He further confirmed that the two offices nevertheless cleared him to represent me,” Obado said.

The governor said he instructed Wajackoyah to represent him in the case and that he discussed details of the case with him and Sagana.

When Obado was arraigned on September 24 last year, there were several other lawyers acting for him and when the quorum was taken, Wajackoyah's name was excluded even though he was present in court, the governor said.

“The advocate took serious issue with the omission of his name from the quorum and informed me as much. In the subsequent court appearance, he came to court and introduced himself as the advocate for the victims. He continues to be on record for the victims to date,” Obado's affidavit read.

“It’s our contention that Wajackoyah can’t represent two parties in a dispute whose positions are in conflict. That would be considered misconduct requiring disciplinary action. We urge you to hold and find that Wajackoyah had a conflict of interest and will be unsuitable to appear before you,” Kilukumi said.

But Wajackoyah, through lawyer Duncan Okatch, said Obado’s intention is to re-victimise the victims and to scuttle the trial.

He said he has offered his services on a pro bono basis and the family is comfortable with him representing them.

The DPP led by Prosecutor Catherine Mwaniki held a neutral position. She said they had no role on victims' advocate and in terms of who would appear for victims, they had no preference and left it to the court.

Obado, 60, his personal assistant Michael Oyamo, 40, and Caspal Obiero, a clerk in the Migori county government, have denied murdering Sharon.

The 26-year-old  student and her unborn baby were killed on the night of September 3 last year in Owade, Homa Bay.

The prosecution intends to call 42 witnesses.

Post a comment
WATCH: The latest videos from the Star
by SUSAN MUHINDI Court Reporter
News
02 December 2019 - 22:00
Read The E-Paper