Why BBI is an absurd reversal of our gains

The Constitution is a document of power and not of men, even the Chapter One statement on the 'Sovereignty of the People' has never been about the people.

• The handshake birthed the BBI and as the report was unveiled this week.

• We are now on a clear path to alter the flawed 2010 Constitution to create another suit that can fit the political class in their quest for power, or at least the preservation of it. 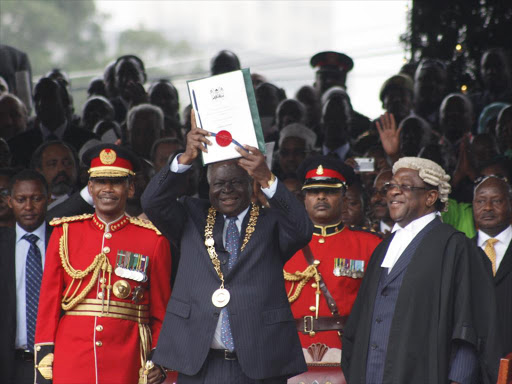 HERE IT IS: President Mwai Kibaki displays new Constitution with a national seal during the promulgation of the document at Uhuru Park on August 27, 2010. He is flanked by Attorney General Amos Wako
Image: FILE

Those who followed the promulgation of the Constitution of Kenya on August 27, 2010, noticed that Attorney General Amos Wako stumbled as he walked back carrying the newly signed document.

The superstitious ones called it a bad omen. Perhaps they were right. It took us nine years to realise that the document in his hands has at least maintained class inequalities, poor distribution of resources, corruption and poverty and the lack of inclusion that we thought it would cure. Kenya today is really only held together by its national boundaries. We are as divided as ever, as poor (make that broke) as ever and as corrupt as ever.

Despite the big words of Chapter Six on integrity, there still emerged a class of corrupt people and rent-seeking cartels who still dominate the political class and are sucking Kenya dry. The issues created by the Constitution predictably contributed to the issues that fomented the national crisis that took Kenya to the brink of collapse in 2017 and which was cured by the Band-Aid we called the Handshake of March 2018.

The handshake birthed the BBI and its report unveiled this week. We are now on a clear path to alter the flawed 2010 Constitution to create another suit to fit the political class in their quest for power, or at least the preservation of it.

The Constitution is a document of power and not of men, even the Chapter One statement that on the “Sovereignty of the People”, has never been about the people. The political class all have a common totemic relationship. People with such totemic relationships feel themselves as partially identified with or at least assimilated to the idea of preservation. Cross-generation preservation, which in this case has been dominated by the dynastic Kenyattas, Odingas and Mois, has now been presented with yet another moment to do it through BBI. The need for preservation of power, either for themselves or for their progeny has always superseded the welfare of the people they lead.

In 1963, Kenya gained Independence but failed to achieve nationhood. We still remained with the same fractures that characterised the struggle for Independence. As for the British, it was not in their best interest that we remained united. We got a Constitution in 1963 but the political class felt insecure with its provisions and so they began to change it. The declaration of Kenya as a Protectorate in 1895 was in itself promulgation of a constitutional (legal) regime over British East Africa (which would in the future be renamed Kenya). This lasted until 1920 when the next ‘constitutional’ change turned Kenya into a colony.

As it were, the set of laws both in 1895 and 1920 were designed to protect the ruling class’s hold on power against whatever the people might think. The two documents were very clear in keeping the common man at bay. The Africans, Asians, Arabs and Europeans alike were kept at bay by the constitutional arrangement of that time.

Only the ruling class – the Governor who ruled on behalf of the British Crown, was protected. The Europeans agitated for elections using adult suffrage. They fought for the right to vote from 1907 and got it in 1920. The rest kept on fighting and soon got some sessions; Asians and Arabs could sit in the Legislative Council and later the Africans were able to do so from 1944.

The agitation for more rights saw three new Constitutions in just six years in the 1950s. The 1954 Lyttelton Constitution, the 1958 Lennox-Boyd Constitution and the 1960 McLeod Constitution (from Lancaster I), were all about ceding more power which was concentrated at the top by the British monarchy through its local appointees (the Governors).

The English monarchy in itself was forced to stand down from absolutism when Oliver Cromwell led the English Revolution (1640-1660) and toppled King Charles 1 and became the first commoner to rule England. From then on, the British monarchy became a constitutional monarchy which fundamentally changed its relationship with the people.

FEAR OF THE PEOPLE

To this day, the ruling class has always feared the people. Jomo Kenyatta too, like Charles I, feared the power of the people. The Constitution of Kenya (Amendment) Act No. 28 of 1964 made Kenya a republic and created the office of president and made him both head of government and state. The president would now be elected by Parliament and not by the people.

It also went ahead to alter the devolved units (jimbos) to make it harder for the people to exercise power. Still, in 1964 the Second Amendment (Act No. 38) of 1964 starved the devolved units of power. They could not raise revenue independently, ushering in the centralisation of power in Nairobi. The power to appoint the judges was also removed from the regional assemblies and awarded to the president. In 1965 the Third Amendment further restricted power to the top.

The executive power of the regions (jimbos) was scrapped altogether. The Supreme Court was abolished and replaced by the High Court in the third amendment. The tenor of the amendments was the entrenchment of power at the top.

The BBI proposals have taken us back to this route. Now the president has new powers. He will now appoint the prime minister (and fire him), meaning we have now encountered an absurd reversal of our march under the 2010 Constitution.

While the report will be subjected to further working, there are those who now understand that this is yet another false dawn. The real problem is our attitude towards power. Is it really about people or about holding on to power? While we did a great job in removing presidential powers in the 2010 Constitution, we could be gradually restoring more powers to the same position, now that the proposed prime minister will behave more like the leader of the majority and not the head of government.

While I appreciate the desire to cure the monster of ‘inclusivity’, perhaps our biggest problem is our attitude to power. With resources concentrated at the top, we still find the presidency extraordinarily attractive. Even if we have allocated anything close to 40 per cent of our national resources to the counties, we are still attracted to the centre. It is the flame that the moths are drawn to. While there are many other fine proposals in the BBI report, the main issue really had been the structure of the executive.

Now, the First Parliament amended the Constitution 11 times in the first six years of Independence (1963-1969). In nearly all of them, the idea was consolidation or power to the centre. Now, the road to perdition is always paved with good intentions.

At that time, this seemed the right thing to do. But was it? We are, I am afraid, returning to the same situation, albeit surreptitiously. Giving the president the power to appoint the prime minister is in itself an expansion of the powers of the presidency and will serve to increase its attractiveness.

It is this attraction to power that always serves to polarise the nation during elections. While we have resisted amendments for at least a decade, we may be making an absurd reversal of the gains we had made.

Raila to Ruto : Don't get jittery over BBI report

Raila criticized Ruto and his allies for rejecting the BBI report before its made public.
News
2 years ago
by GODFREY SANG Writer and Biographer
News
30 November 2019 - 05:00