BLESSING AND A CURSE

• Harvesting of the long-rains maize in the North Rift started late in October and will continue until late December or early January.

• CAS tells farmers to be cautious and harvest as much as they can when it is not raining and store the produce properly to avoid spoilage. 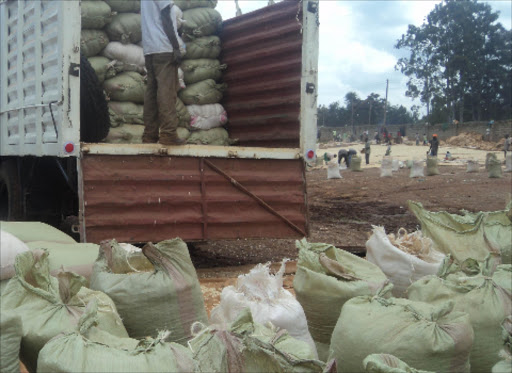 “The ongoing heavy rains are a blessing in some areas and a problem in others because they are affecting harvesting, transport and storage of maize,” Tuimur said on Monday.

Harvesting of the long-rains maize in the North Rift started late in October and will continue until late December or early January depending on the size of the farm. Tuimur explained that the current downpours in the October-November-December season are rare — a phenomenon explained by the Met as the Indian Ocean Dipole.

According to the department, it arises from the unusual warming of the Indian Ocean and happens every 10 years. It comes with destructive rains that cause flooding across East Africa.

The CAS told farmers to be cautious and harvest as much as they can when it is not raining and store their produce properly to avoid spoilage.

"Farmers should also take advantage of the good maize prices with a 90kg bag selling at Sh3,000," Tuimur said.

Strategic Food Reserve board chairman Noah Wekesa said the rains are likely to cause at least 30 per cent post-harvest losses. He said the board will announce maize prices by the weekend.

“We are yet to announce the prices because measures taken by the government not to import have been good for farmers. Last year, maize was selling at between Sh1,400 to Sh1,800 but they are able to sell at between Sh2,800 to Sh3,200 in the last month," Wekesa said.

"Farmers were being robbed by traders because there was a glut of imported maize but this has changed since we blocked importation."

Wekesa said they will open up National Cereals and Produce Board stores for purchase of maize when the need arises.

“Right now there is no much need as farmers in the North Rift are able to sell their maize to millers easily. But this does not mean we are not going to buy maize for the grain reserve. We will be making that decision soon."

Tuimur urged farmers to utilise the warehouse receipt system being offered by NCPB and the private sector.

“This will ensure they sell their maize when prices are right and they will also have bankable documents to access credit. The system has worked well in South Africa and it is the high time we also adopt the technology to avoid issues of delayed payments,” he said.

Farmers expected to have huge post harvest losses due to heavy rains.
News
3 years ago
Post a comment
WATCH: The latest videos from the Star
by AGATHA NGOTHO Science Writer
News
25 November 2019 - 23:00
Read The E-Paper