Those affected cannot not get formal employment, do legal business and move freely around the country.

• One is required to produce an alien card or any document showing that one registered as a refugee.

• The applicant must be accompanied by both parents who must have their ID cards. 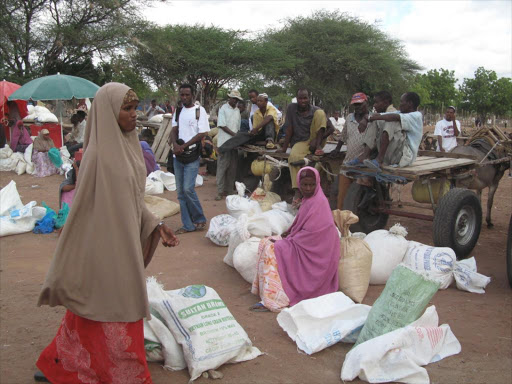 Stringent rules for the de-registration of Garissa and Wajir residents whose fingerprints appear in the UNCHR refugee database are slowing the process.

The rules could also lock out some citizens who do not possess some of the requirements.

For instance, one is required to produce an alien card or any document showing that one registered as a refugee.

The applicant must be accompanied by both parents who must have their ID cards.

In the absence of the parents, one is required to come with a close relative from the parents' lineage.

In some cases, the food rations card is also required as proof that one received help from the UN agency.

Records by the UNHCR put the figure of those affected at 40,000.

The government launched the month-long de-registration drive two weeks ago at an event presided over by Interior Chief Administrative Secretary Patrick Ole Ntutu.

Ole Ntutu said the move was prompted by the fact that the majority of those affected are minors who registered as refugees while they were young.

The leaders had complained several times that hundreds of victims could not secure identity cards since they are regarded as refugees.

They could also not get formal employment, do legal business and move freely around the country.

A committee comprising elders, civil registration officials, members of the National Intelligence Services, chiefs and chaired by the deputy county commissioners, is leading the process.

A visit to the vetting session at Jamhuri Club chaired by the Garissa deputy county commissioner Samwel Njuguna showed that the members take roughly 40 minutes to vet an individual.

According to a committee member who spoke on condition of anonymity, the team vets an average of 20 people daily.

The stringent requirements and the time taken to vet an individual has got the attention of not only the victims but local MCAs.

Hundreds who turn up for the vetting process have been going back a  dejected  lot.

Mohamed Abdi, a resident of Waberi ward, is disappointed by the hurdles it takes to get clearance.

When the Star met him outside the Jamhuri Club, he lamented the slow pace of the exercise.

“Yes I have all that they require but I have been coming here for the last three days. The long queues and time it takes to vet individuals is frustrating,” he said.

Dubow Hussein whose daughter is a victim of double registration appealed to the government to scrap some of the rules so that genuine Kenyans can acquire identity cards after the vetting process.

“Like now the mother of my daughter is in Mombasa. She can’t travel here for the exercise. My daughter has undergone immense torture for lack of an identity card we badly need to go through this vetting,” he told journalists.

Another applicant, Saadia Mohamed said she left the refugee camp ten years ago after she was registered by her aunt.

She said that the documents required like ration cards to prove registration will be almost impossible to get.

“I don’t know if I will get the documents. I have no relative at the refugee camp currently. The aunt who enlisted me went abroad,” she said.

Garissa peace committee secretary Hassan Osman urged the vetting committee to waive some of the rules for the sake of the victims.

“We wish to call upon the committee to vet affected persons reasonably within the confines of the law and not to put stringent measures that will not be in conformity with the goodwill of the exercise,” he said.

He added, “I think telling someone to produce both parents during vetting is an outrageous suggestion.”

Dadaaab MP Mohamed Dahiye told the Star on the phone that he was in constant touch with those carrying out the de-registration to ensure its success.

“As you are aware since my assumption to office as Dadaab MP, finding a solution to this debacle has been a top priority. Now that we have an opportunity to correct the situation, I won't allow the exercise to fail. Not at all,” he said.

Galbet MCA Abdirizak Ismail said that the UNHCR personnel should avail the database containing records of Kenyans who registered as refugees.

“Instead of asking for an alien card, meal card which one might have lost, it is better to use one's fingerprints to know whether one is registered as a refugee or not,” he said.

He added that it was time to use technology to speed up the process.

“Let those who claim to have registered as refugees come and their fingerprints matched in the UNHCR database with a click of a button,” he said.

Ismail also wants the vetting committee to be split into two groups to hasten the process.

“We met the county commissioner and gave him these recommendations, which he took positively. We hope they do that,” he said.