•Taxpayers are paying an average of Sh60 billion in interest per year for 62  international loans. 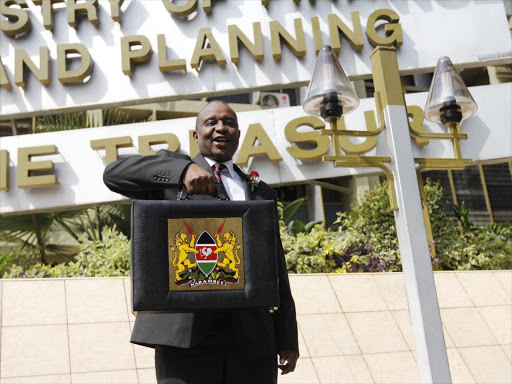 Kenyans born today will be 71 years old by the time the country clears its Sh3.1 trillion external debt — if the country doesn't borrow more.

That's a stark illustration of the country’s worrying debt trap.

Data on Kenya’s external loans seen by the Star shows the country has 62 pending external loans, whose payments are staggered over a number of years. The Sh991.2 million from Unicredit Bank Austria at an interest of two per cent will be retired in 2090.

According to the data from the Treasury's External Debt Register as at September 30, a multilateral loan valued at  Sh682.9 billion taken from International Development partners is the highest of the 62 loans. It is priced at 2.28 per cent and will mature on May 15, 2055.

It is followed by Sh414.2 billion borrowed at 7.46 per cent from Citigroup Global Markets Europe, which will mature on August 27, 2048.

The smallest loan is a bilateral facility worth Sh57.9 million borrowed from the government of the United Kingdom at 0.5 per cent. It's due on June 30.

The document further shows that the country cleared four commercial bank loans priced at five and six per cent that were due last month.

It does not give further details about the loan from  Apex Finance Corporation, Erste Group of Banks, LBA Systems and Sound Day Corporation.

An official at the National Treasury declined to comment on the debt document, requesting more time to interrogate it.

Perhaps more onerous is the huge interest the country is supposed to pay to international lenders, especially commercial banks where President Uhuru Kenyatta’s government sought loans with interest above nine per cent.

A case in point is the Sh288.1 billion Kenya borrowed at a rate of 9.4 per cent from the Trade and Development Bank in 2017, partly to plug a deficit equal to 9.7 per cent of the Gross Domestic Product in its budget for fiscal 2016-17.

The country is paying annual interest of Sh27 billion for the loan that is due on April 10, 2036.

According to the data, Kenya has a total of 12 commercial loans valued at Sh1.003 trillion priced at between one and 9.4 per cent annually, averaging 4.86 per cent.

This means taxpayers are paying an average of Sh48 billion in interest per year for the 12 loans alone, accounting for 80 per cent of the total interest the country is paying on international loans.

The average annual interest for all 62 loans is 1.94 per cent, putting Kenya’s interest bill for current Sh3.1 trillion international loans at a minimum of  Sh60 billion per year.

The interest for bilateral loans ranges between 0.75 and 7.5 per cent, while that for multilateral loans is priced at 0.5 to 3.9 per cent.

In May, Kenya raised Sh210 billion sovereign debt to be paid in two tranches at seven and 12 years. Treasury used Sh75 billion or 35 per cent of the money to service part of the inaugural sovereign bond taken in 2014.

According to the prospectus used to secure the second Eurobond worth Sh200 billion in February last year, the country was to spend at least 80 per cent of the proceeds on retiring syndicated loans contracted in 2015 and 2017.

The Treasury had taken a $1 billion (Sh100 billion) syndicated loan from a consortium of banks in March 2017, which matured in April.

Gatundu South MP Moses Kuria said on national television that the National Assembly Budget Committee — of which he is part — abdicated its oversight role and lied about the true extent of the country’s debt crisis.

According to Kuria, the government has been inflating its total budget amid low domestic revenue collection, forcing Treasury to borrow to cater for the deficit.

"We (Parliament) have failed in our oversight duties. The country is in a hole for which we said yes instead of no. Ours is an error of omission. Every year we have sold to Kenyans this romantic story that all is well because we respect the Executive and most of us are in the ruling party," he said.

Although various officials from Uhuru’s ruling Jubilee Party have since dismissed Kuria’s accusations, his warning on the country’s borrowing trend and increasing budget reflects warnings of international economic advisers.

In July, the World Bank raised the alarm over the high cost at which Kenya and other African countries are borrowing commercial loans, warning of debt stress if the loans are not invested in productive projects.

"If a country wants to avoid a debt crisis, you need to make sure that the cost of borrowing is lower than the return on investment," World Bank vice president for Africa Hafez Ghanem said moments after a meeting with Uhuru at State House.

Last month, the International Monetary Fund warned that Kenya's ballooning debt could push it into a "high distress" zone alongside other Sub-Saharan African countries facing a similar situation.

The cautions were delivered as the country was said to be lobbying for 44 loan agreements valued at about $4.1 billion (Sh4.182 trillion)with 15 lenders, including the AfDB, China, Japan and the World Bank.

Last week, the Senate approved Treasury's request to raise the public debt ceiling to Sh9 trillion, potentially plunging the country deeper into debt. This was after the National Assembly passed the same without any questions.

The National Treasury proposed to cap public debt at an absolute figure of Sh9.1 trillion by 2023, a departure from 50 per cent to GDP threshold that the government has failed to keep.

The country has a total public debt (external and domestic) of Sh6.2 trillion according to Central Bank of Kenya's Weekly bulletin, translating to 60 per cent debt to GDP margin.

Eyes are now on acting Treasury CS Ukur Yatani who has promised to monitor and limit the country's borrowing appetite to cushion households and businesses forced to pay more in taxes to repay loans.

It comes a little too late.

The lender has called for fiscal consolidation to reduce debt from the current 62% of GDP to 55%.debt currently stands at Sh5.81 trillion.
Business
2 years ago

The situation is not a good signal for the economy, Kiriga said.
News
3 years ago
Post a comment
WATCH: The latest videos from the Star
by VICTOR AMADALA Business Writer
News
16 November 2019 - 08:34
Read The E-Paper