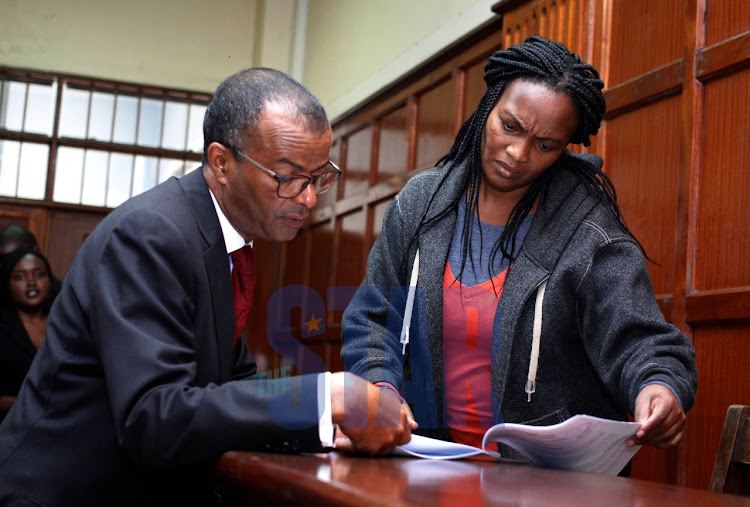 They denied killing Cohen on the night of July 19 and 20 at an unknown place.

This was after the court allowed an application by the prosecution to consolidate the two charges, ruling that they are similar.

Justice Stella Mutuku ruled that she arrived at the decision after considering the application by state and objections by defense.

According to the court, consolidation is a procedural matter and any offenses may be consolidated if founded on the same facts.

“I have read the information on the two counts are similar except for the names of the accused. I have compared both charge sheets. I find the intended information satisfies the law to satisfy myself that they will not prejudiced ,” the judge ruled.

Judge Mutuku further noted that in her view the evidence is not necessarily given before plea is taken, although the information must be read out to the accused.

She ruled that the application by prosecution was in order as it  was based on the law and dismissed the opposition by the defense.

However, the judge noted the delay in providing the defense with a list of witnesses was against the law.

Judge Mutuku ordered the prosecution to make sure that they supplied all the necessary witness statements and information within the next two weeks.

“I will allow them two weeks to put their house in order,” she said.

Earlier in the day, the defense had put up a spirited fight objecting to the two cases being consolidated as had been applied by the DPP.

Lawyer Philip Murgor said even though it was a routine application which was ordinarily not opposed, they were opposed to it because of the circumstances of the case.

Murgor argued that the only way they could know whether facts were similar would be if they were supplied with a list of witnesses and their statements which would include expert reports and the scene of crime report.

“As of now, none of these has been available. What we have are two charge sheets. They are not evidence; they are not facts,” he told court.

Particulars of an offense are not facts and the law requires that by the time the accused is arraigned the evidence is immediately given to the defense, Murgor said.

He on Friday last week they addressed a letter to the DPP and IG so that prosecutor Catherine Mwaniki and DCI George Kinoti could give them the evidence.

However, Mwaniki strongly opposed the letter being canvassed in court, saying some of its contents amounted to interference with witnesses.

Karanja's lawyer Francis Mburu also opposed consolidation, saying he had not been supplied with witness statements.

But the prosecution asked the court to allow them to consolidate, saying the facts were similar and consolidation was a routine process in such a case.

Meanwhile, yesterday afternoon after the ruling and pleading afresh to the charge, Karanja was arrested by cops outside the court.

The court heard that there were cops in court waiting to arrest him in connection with a robbery with violence offense.

The prosecution said there was a warrant of arrest in another court on a matter not related to the murder case and the police should be allowed to do their work.

Karanja was arrested by officers who informed him that they were taking him to Gilgil police station in accordance with a warrant against him.