CJ says he would skip state functions if the 'disrespect' accorded to him continued.

• Maraga 68, graduated as a lawyer 40 years ago from the University of Nairobi, before going into private practice.

• While launching the Drug Awareness Campaign early this year, Maraga confessed that 20 years of his life were wasted as he wallowed in alcoholism. 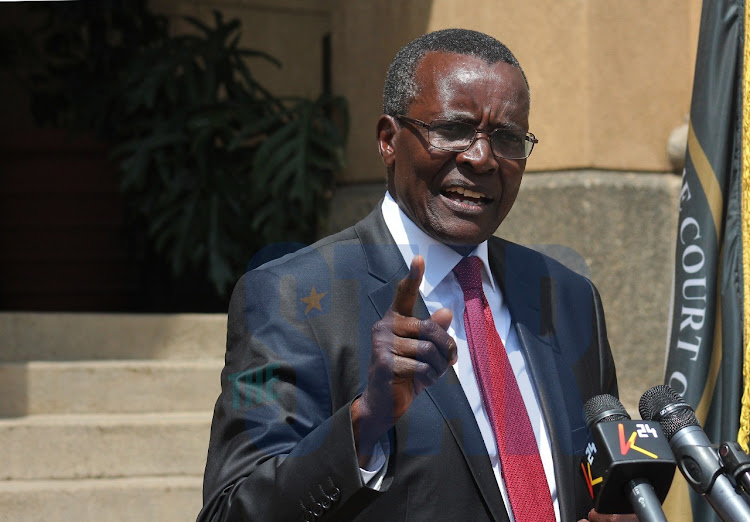 Maraga on Monday held a press conference in which he alleged a plot by the executive to kick him out of the Judiciary.

In a terse speech, the CJ also questioned why he did not have a high-end Mercedes Benz yet the speakers of the National Assembly and Senate do.

He further said that he would miss State functions if the 'disrespect' accorded to him continued.

“Let us stick to our lanes…Let us not allow a few people to cripple the Judiciary. I appeal to NA to give us a reasonable allocation so that our operations do not come to a halt," he said.

Who is David Maraga?

Maraga 68, graduated as a lawyer 40 years ago from the University of Nairobi, before going into private practice.

He is married and has three children.

Following the early retirement of former Chief Justice Willy Mutunga, he beat off stiff competition from 10 other prominent judges to become the President of the Judiciary.

While launching the Drug Awareness Campaign early this year, Maraga confessed that 20 years of his life were wasted as he wallowed in alcoholism.

“I was baptised on October 30, 1965, when I was still in primary school but I got into bad company in high school. I started drinking even on credit,” Maraga said.

The CJ said he was still a drunkard throughout his undergraduate programme and a great part of his legal career.

Having gone back for his master's degree 34 years after his undergraduate, Maraga slowed down ambitions to alcoholism.

“For more than 20 years, I mark-timed except in providing basic necessities. I would go home at 3 am and ask for dinner. My wife would ask me if it was really dinner or breakfast I was asking for. I would not have been Chief Justice if I had not given my life to Jesus Christ,” he said.

Maraga who is a staunch Seventh Day Adventist told the Judicial Service Commission during his interview that he does not work on Saturday's.

He vowed never to compromise his Seventh-Day Adventist beliefs to attend to work.

Maraga said he could only miss church to attend to a matter of life and death, for instance, an accident happening on his way to church in which he would stop to help the victims.

His belief made him schedule the presidential petition in 2017 on a Saturday night after the Sabbath had ended.

Maraga who heads the supreme court had it rough after he declared 2017 presidential election null and void.

The opposition led by Raila Odinga said that the results declaring Uhuru Kenyatta the president were doctored.

In a first-ever ruling, judges nullified Uhuru's win and called for new elections within 60 days.

After that, Uhuru referred to the judges as wakora (crooks) and promised "to revisit" the decision.

But Maraga stood firm adding that there were irregularities in the election.

Uhuru, while campaigning for re-election in Justice Maraga's home area, had told people that they should vote for him because his government had given "their son" a job.

But Maraga through the JSC stated that he was not a government project.

"I have restrained myself from responding to these false statements... However, they continue to be claimed and peddled around as if they are the truth..." he said.

Maraga alleges plot by Executive to remove him from office

'Angry' Maraga vows not to attend State functions if not respected

Maraga said during Mashujaa Day, he walked to the dais through a side walk.
News
2 years ago
by NANCY AGUTU Senior Digital Reporter
News
05 November 2019 - 06:32