Raila allies to Mt Kenya: Be honest on powerful PM

Leaders from Central have promised to shoot down attempts to alter the presidential system.

•They said the leaders are non-committal on the unity agenda initiated by Uhuru and Raila through the Building Bridges Initiative. 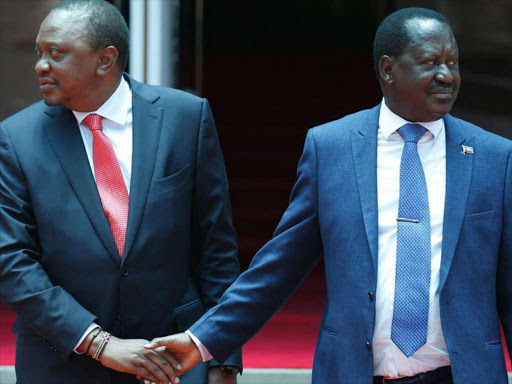 Allies of ODM leader Raila Odinga are headed for a showdown with a section of Mount Kenya politicians over a proposed shift in governance that would clip the powers of the presidency.

On Thursday, the Star exclusively reported that the Building Bridges Initiative team had proposed the creation of a powerful prime minister elected by Parliament and a ceremonial president.

However, a section of leaders from President Uhuru Kenyatta’s Mt Kenya backyard has promised to shoot down attempts to alter the presidential system.

“The BBI must address the issues of under-representation in Central Kenya. We want the principle of one man one vote respected,” Kioni said.

While reading a statement signed by 39 MPs including CS Kiunjuri, Kioni said a parliamentary system of governance will disadvantage the people of Mt Kenya who he said, are already underrepresented.

They promised that they would reject any proposal to have either the president or prime minister elected in Parliament or through any other means other than directly by the people.

The near-unanimous rejection of a parliamentary system of government in Mt Kenya is likely to put Uhuru in a political fix.

The President had promised to support the BBI process which he said would be the solution to Kenya’s historical injustices and elusive peace and unity.

Uhuru was part of the Parliamentary Select Committee on Constitutional Review that shot down a proposal to create a premiership in 2009, alongside other backers of then-President Mwai Kibaki.

Kibaki had similarly dashed hopes of an executive PM in 2002 after he turned his back on the NARC agreement with LDP.

Mwaura said, "When it comes to governance, we want the principle of one man one vote respected. We will not elect leaders through Parliament or  [electoral] college."

However, Raila’s allies said the Mt Kenya leaders were non-committal on the unity agenda initiated by Uhuru and Raila through the BBI and are working with anti-handshake crusaders to defeat it.

National Assembly Minority Leader and ODM party chairman John Mbadi accused the Mt Kenya MPs of not being ‘genuine and serious’ with the handshake unity drive.

“I don’t know where they have done their public hearing to know that their people don’t want a parliamentary system, unless some have a plot to scuttle the work of BBI,” Mbadi said.

Mbadi wondered why the leaders were quick to preempt the contents of the BBI report before it is made public.

Nominated MP Godfrey Osotsi read mischief in the leaders' threat to reject the BBI report. He said there is a hidden political hand in the opposition of the handshake report.

The legislators challenged their counterparts to be patient and wait for the upcoming boundary review if they were genuine about the issue of representation in the region.

Ugunja MP Opiyo Wandayi said, “Let’s not jump the gun. Let’s wait for the report to come out so that we can talk about it with authority. All these talks and ultimatums are premature.”

A member of the task force on Wednesday told the Star they had recommended for a PM to be elected by Parliament from the party that wins majority seats, shifting the battle for executive power to Parliament.

To address the question of exclusivity, the 14-member panel proposes that the president, deputy president, the prime minister and the two deputies should be shared out by at least five different communities.

However, communities that miss out on the five plum jobs would share ministerial positions in a manner that gives the Cabinet a national face.

According to political analyst Herman Manyora, leaders from Mt Kenya have been apprehensive about the change of governance for fear of losing their grip on power.

He observed that the region, though highly populated, has fewer electoral zones than others, thus the vehement rejection for a change of the current system.

“They have a sense of entitlement. They think they deserve to be the rulers of this country. That is why they want the power of this country not to be dissolved. Under normal circumstance, every election cycle, they must get someone in power,” he said.

On Wednesday, the BBI team announced that it had concluded compiling the report that takes into account the views of Kenyans from across the 47 counties.

"Having heard how urgently Kenyans seek positive and far reaching change, the task-force believes that Kenya can utilise this auspicious moment to build the bonds between us  that will become a strong foundation for an inclusive, fair and prosperous nation," read the statement by the joint secretaries Martin Kimani and Paul Mwangi.