Sossion has suspended the Annual Delegates Conference set for December.

• The union on Thursday sought the help of sister labour union COTU to iron out the leadership feuds and re-conciliate the top union heads. 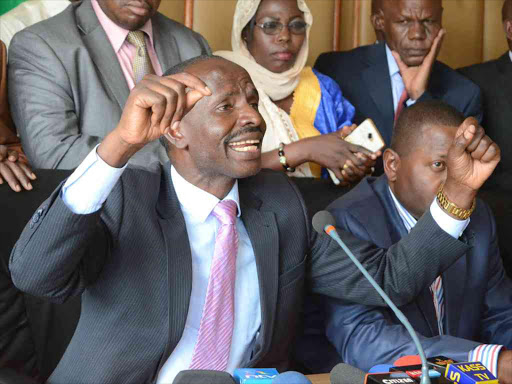 Knut secretary general Wilson Sossion in a past event/VICTOR IMBOTO

The meeting sought to among other things iron out the leadership wrangles in the union and fill in the vacant positions.

It is at this meeting that KNUT delegates were to either reaffirm their confidence to the contested secretary general Wilson Sossion or vote him out.

Sossion in September survived a battle to oust him from the union spokesperson position.

However, those against the SG sought to use the meeting as a channel to try and get a vote of no confidence in the SG to have a change of guard.

To end the hostilities, the union on Thursday sought the help of COTU to iron out the leadership feuds and re-conciliate the top union heads.

Omucheyi is battling for his survival in the union over retirement age.

"It is practically impossible to have the ADC in December as requested by a section of our branch members. We, therefore, postpone the ADC indefinitely," Sossion said.

The venue of the conference was set for Kakamega and would bring together 1877 delegates representing the former eight regions.

The eight regions to be brought in this year's ADC will involve Central, Coast, Eastern, Nairobi, North Eastern, Nyanza, Rift Valley and Western.

It was first time the anti-Sossion movement made good its threat initiating the ouster of the secretary general.
News
3 years ago

Development effectively bars the official from any financial transactions on behalf of the union.
News
3 years ago
Post a comment
WATCH: The latest videos from the Star
by LEWIS NYAUNDI Education Reporter
News
24 October 2019 - 12:46
Read The E-Paper