• A National Performance Trial is the process of validating the performance (insect resistant and yield) of the variety and it is carried out by the Kenya Plant Health Inspectorate Service. 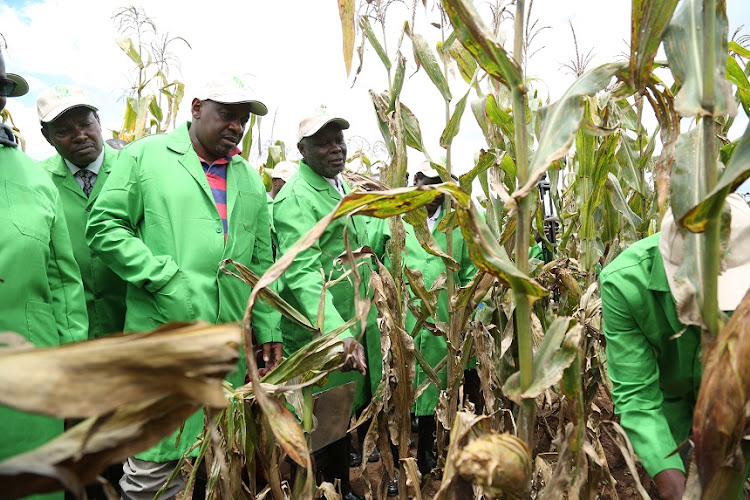 As the world marked the International Food Day on Wednesday, researchers are still pushing the government to approve National Performance Trials for genetically modified maize.

They have been pushing for 10 years.

Agriculture PS Hamadi Boga said Kenya could be edging closer to approving the NPT following regular consultations with stakeholders in the regulatory agencies. They include the National Environment Management Authority and the Department of Public Health among others. Approval by the agencies has been an impediment for the approval of the NPT.

Boga has said that the BT (Bacilus Thuringiensis) technology in maize has been researched and proven.

He spoke on Tuesday during a field visit to Kenya Agriculture Livestock Research Organisation in Kitale to witness demonstrations on BT maize in a confined field site.

The science part is ready and concluded since 2016. It is now a matter of getting stakeholders to accept the technology and move forward. The citizens, church leaders and farmers are ready and they want it like yesterday.

NPT is the process of validating the performance (insect resistant and yield) of the variety and it is carried out by the Kenya Plant Health Inspectorate Service.

James Karanja, a maize breeder from KALRO who is in charge of the project, approval was granted by the National Biosafety Authority to proceed with the NPT for Bt maize in January 2017.

The process also required an Environmental Impact Assessment conducted by Nema to determine environmental risks associated with the technology.

The EIA certificate was given by Nema and later retracted. It cited implications of the GMO ban b the Cabinet in October 2012.

Boga said the ban was on importation and consumption of GMO products in but not on research.

Some lobby groups have strongly opposed the technology, citing human and animal health and safety of the environment. They urged the government not to lift the ban.

EIA certificate given by Nema retracted citing implication of the 2012 GMO ban.
News
2 years ago

The Agriculture PS told those opposed to the technology to base their argument son facts and not conspiracy theories.

“In African society, if one does not understand something, it is attributed to certain powers. As far as technology is concerned, the information is in the public domain and it’s clear and consistent,” he said.

He said the Ministry of Agriculture is talking to stakeholders such as Nema and the Public Health department to debunk the myths about GMO crops.

The PS said the ministry is working with regulatory agencies involved in NPT for the GM maize and is trying to get the ban lifted.

“We want to speak in one voice and we are trying to build consensus but this is posing a challenge since each has its own perspective. But as soon as we are able to convince stakeholders we will be able to adopt the technology,” Boga said.

“I am not hypocritical about this technology and I think having listened to all arguments I see a lot of hypocrisy in the conversation around GMOs. I think we should put issues on the table and discuss them openly and objectively so that all of us can access this technology.”