"He was flexing his skinny legs and giving the world an opportunity to behold him," he said.

• Bisceglio said the planning that went into the event was a fantasy of perfectionism.

• The editor noted that Kipchoge's performance was not necessarily better than some of his other great feats. 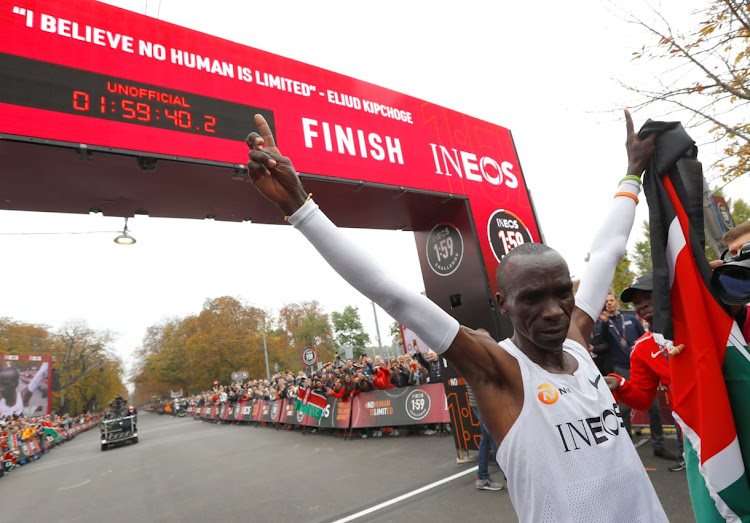 World record holder Eliud Kipchoge in Vienna after finishing the race in below 2hrs./COURTESY

This was after Kenya's Kipchoge broke the barrier by running 42km in under two hours in Vienna in the Ineos challenge on Saturday.

When Kipchoge crossed the finish line in 1:59.40, it was all shouts, singing, and dancing from supporters.

But in an opinion piece titled 'The greatest, fakest world record', Paul Bisceglio claimed that Kipchoge ran the fastest time ever over the marathon distance, but did not 'run a marathon'.

"Such an extensive level of support, combined with the fact that Kipchoge wasn’t actually competing against anybody, pushed the event outside of official marathon conditions and prevented his performance from counting as a true record," Bisceglio said.

"The organisers were fully aware of this; the event, as Outside magazine aptly referred to it, is perhaps best understood as an “exhibition marathon”.

Bisceglio who works for the Atlantic media organisation, said the planning that went into the event was a fantasy of perfectionism.

"The organisers scouted out a six-mile circuit along the Danube River that was flat, straight, and close to sea level," he said.

"The pacesetters, a murderers’ row of Olympians and other distance stars, ran seven-at-a-time in a wind-blocking formation devised by an expert of aerodynamics."

Yesterday a human ran under two hours in the marathon. It was an extraordinary achievement—but not in the way you might think. I had some thoughts! https://t.co/bl483OFd8N

His opinion piece was received by criticism from around the globe.

@AfroMelanated said, "Never have I seen so many words put together to make an incoherent argument."

He added, "He had unfettered access to his favourite carbohydrate-rich drink" Are you saying mursik gave him unfair advantage? Screaming!"

@kenhesser said, "What a garbage take. Marathon WRs are always going to be “tainted” by the conditions, course, etc. Calling the achievement “fake” is offensive." "The author should be reminded that the current World Marathon Record is held by the same person. He was not running to break his own record but to inspire and show others it can be done in under two hours," @jackaloh said.

@Kamungah said, "What a waste of your weekend. If writing is your talent, I wonder how much technological assistance you'd need to be any good. I haven't seen any claim that it's a marathon world record, or dismissal of the tech at play. It is purely a man's attempt at breaking a barrier."

@FakeFan50 said, "Good God, the tone of this article is so bitter I couldn't help but think the author is a bit jealous he will never get close to a pace this fast."

"Kenyans used to run without shoes before all these hi tech shoes were invented. They still won. You won't spoil for Kipchoge the way you guys whitewashed Semenya's success," @TuJadili said.

@Alibash_Mohamed said, "Yeah. He was carried in a vehicle and he had wings attached to him. So he flew! Fakest!"

"As if Americans landed on the moon barefoot. Silly," @PeterNyaundi said.

"Keep those thoughts to yourself. Greatest Fakest Article," @MathewsAnushka said.

@thepankajkhadka said "I’m so disappointed with this headline. Everything this man did was, incredible, and real. Not a single fake thing about it. Won’t even open the article because there’s nothing of interest on there!"

In the article, the editor noted that Kipchoge's performance was not necessarily better than some of his other great feats.

"At the heart of the spectacle was still one of history’s most extraordinary athletes, flexing his skinny legs and giving the world yet another opportunity to behold him... but it’s hard to argue that it was any worse."

How Eliud Kipchoge completed INEOS challenge in under 2 hours

Kipchoge ran the first ever marathon under two hours in the Austrian capital of Vienna.
News
2 years ago

"I am getting support from all over....this is not my last marathon," Kipchoge said.
News
2 years ago

Safaricom CEO: "We will be going beyond having Kipchoge as our ambassador."
News
2 years ago
by NANCY AGUTU Senior Digital Reporter
News
14 October 2019 - 11:02