Intrigues in the ferry tragedy recovery 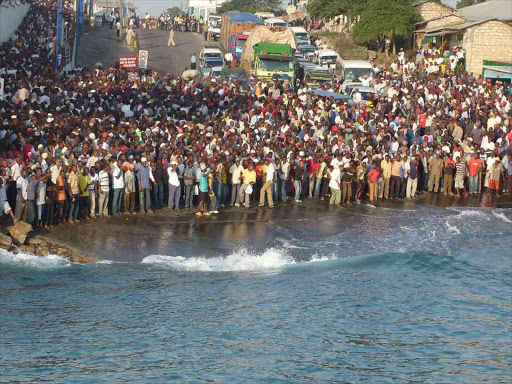 It took the frantic intervention of Mombasa Governor Ali Joho for four South African divers to rejoin the operation of recovery of the car and bodies at the Likoni channel on Friday, the Star can reveal.

The four were part of the team contracted by the family to help in the location and retrieval of bodies of Mariam Kighenda and her four-year-old daughter Amanda Mutheu.

The foreigners, from Subsea Services Limited, had left in anger after the Kenya Navy tried to elbow them out of the expected credit should the operation end successfully.

Sources close to the operation revealed behind the scenes intrigues that hampered the retrieval of the bodies on Thursday, when the Kenya Navy were sure they would conclude the exercise. It was not to be.

On Friday, the Star learnt, it took the intervention of Mombasa Governor Hassan Joho to convince the South Africans to re-join the operation.

“Yesterday [Thursday], they were at the lounge at the airport waiting for their flight back to South Africa when they received a call from the governor. The governor had to persuade them to return,” the source said.

The Star learnt that a meeting on Wednesday evening that went late into the night was the last straw for the South Africans.

The meeting involved the Kenya Navy, KPA, Subsea Services and Southern Engineering Company, who provided the barge that was mounted on the crane to be used to pull the car from the sea.

The sitting ended in disagreement after the Kenya Navy wanted the other team members to allow them to take credit for the recovery.

Seven divers from KPA, including Chinese nationals, were among the team that located the car with the help of the South African divers on Wednesday.

“We then contacted Comarco, who have superior equipment, and they confirmed that the object was indeed a car. Kenya Navy then sent away all other team members in the operation, including us, on Thursday. Four South Africans brought in by KPA to help us in the operation were also ejected from the exercise,” the source said.

"Seco banged the table. They did not want that. But they were threatened with dire consequences by the government and they cooled down.”

The South Africans however could hear none of that and decided to leave. On Thursday evening, following the failed retrieval efforts, there were reports that there would be protests against the Navy in Likoni.

On Friday, KDF trucks were spotted heading to Shelly Beach in Likoni, where the protests would have happened.

Teargas was used to disperse crowds of onlookers who had gathered on the shores of the Likoni mainland side of the crossing channel.

Government spokesperson Cyrus Oguna on Friday morning said the recovery operation started at 8am, an hour earlier than usual, so as to finish it early.

“We are hoping that this is concluded as soon as possible,” he said.

By noon, Friday, there were reports the team had hooked the vehicle and was pulling it up.

Family members, led by widower John Wambua, sat together with KFS board of directors, as they watched the exercise, which was nearing its end.

Oguna said the strong undercurrents prevented the team from retrieving the bodies and the car on Thursday.

The spokesperson did not allow many questions on Friday morning, stating that the exercise would be completed by the end of the day, Friday.

Sources said the recovery effort would have ended on Thursday.

“We would have finished the game yesterday but the Kenya Navy would hear none of it. They want their name to be praised. They want to take all the credit,” the source said.

This would explain the treatment of private diver Moses Owaga, who was ordered to leave the operation last week.

“Why do you think Musa was ejected? He was hogging the limelight. We always work with Musa but this time he was disowned,” the source said.

“Yesterday, the Kenya Navy were working alone the whole day. Did they manage? They failed to score.”

The source said the retrieval operation was supposed to see the car lifted from the 58m depth up to 30m.

“Then they were to go below the vehicle and put a balloon so it comes up and everybody goes their own way,” the source said.