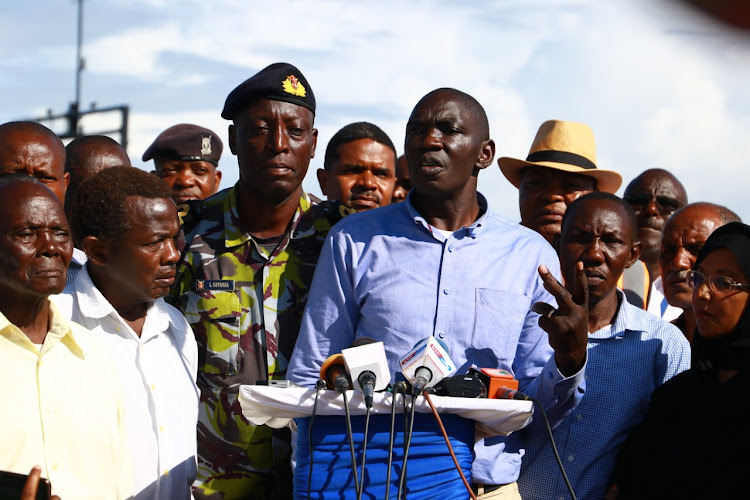 The family of the mother and child who sank into the Indian Ocean at Likoni remained mum last night about government claims that their car was sighted deep in the water.

“We are not going to give any comment until we are shown the bodies,” family spokesman Luka Mbati told the Star.

Government spokesperson Cyrus Oguna on Wednesday told the press Kenya Navy officers working with the South African divers and other government agencies had sighted an object that resembled a car sitting 58m deep in the Likoni channel.

The object, believed to be the vehicle that plunged into the channel 11 days ago, was spotted around 2pm, said.

“Today at around 2pm, our officers sighted a car-like object sitting at the sea bed. The object was spotted in a basin-like area deep in the channel,” Oguna said.

He said the operation to retrieve the vehicle and bodies was 90 per cent complete.

“What is remaining is about 10 per cent. We need to confirm the number plate of that vehicle to ascertain if indeed it is the one that sank into the channel on September 29. We are hopeful by tonight or tomorrow morning, we’ll be able to complete the operation,” he said.

Unconfirmed reports indicated that the wreckage was retrieved and taken to Southern Engineering Company.

Mariam Kighenda, 35, and her four-year-old daughter Amanda Mutheu dropped off a ferry into the ocean while in their car on the evening of September 29.

Last night, her husband John Wambua, when reached by the Star to comment on the government announcement, promised to call back later but had not by press time.

On Monday, Wambua asked Kenyans to pray with the family while dismissing calls to offer a sacrifice to appease the gods of the sea to release the bodies.

On Wednesday, word spread that the vehicle had been sighted.

However, Oguna said the "car-like" object sitting in the deep waters of the Likoni crossing channel had not been confirmed to be a vehicle nor had the Navy confirmed it had bodies in it.

But some divers who spoke separately indicated that they had seen bodies as well.

Oguna said the Navy officers and other government agencies had been working around the clock to ensure they retrieve the vehicle and the bodies.

“The Navy began its operation the same day the car plunged into the ocean. A few days later, we saw some people bragging that they could do a better job than the Navy, but they gave up almost immediately. For us, we have been here and we’ll not give up until the work is done,” Oguna said.