• Muhuri chair Khelef Khalifa said they are not in the business of praising President Uhuru or the government.

• Mvita MP Abdulswamad Nassir arrived at the Nyali police station after getting word that activists and truckers were arrested. 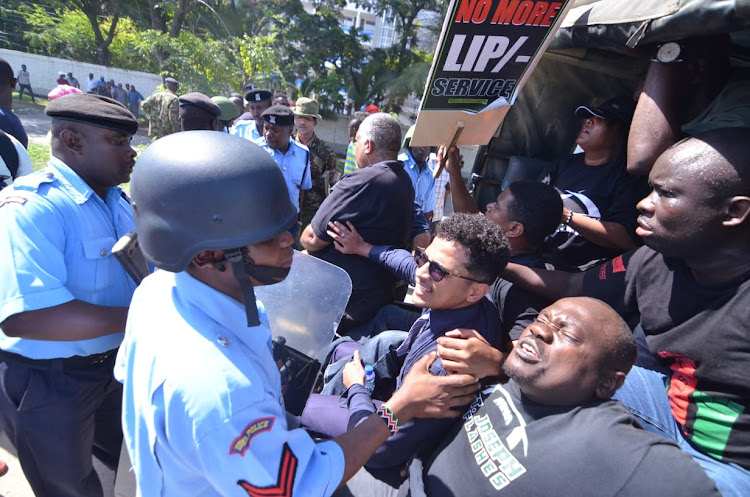 Mombasa politicians were conspicuously absent when protests against the government directive on SGR were violently thwarted by the police yesterday.

More than 20 activists and truckers were arrested during the anti-SGR directive demos. However, the police said only 15 were set to be charged in court in the afternoon.

"They will be charged with incitement to violence," said a police source at the Nyali station, where those arrested spent hours in a cell.

The development followed an altercation between the activists and politicians on Saturday.

The activists included those from the Muslims for Human Rights and Fast Action Business Community under the Okoa Mombasa Coalition. They heckled Kisauni MP Ali Mbogo and Senator Mohamed Faki after the two suggested the protests be stopped to allow for dialogue.

"Let us give them time. If after a week nothing happens, then we will see what to do," Mbogo said on Saturday.

The statement angered the activists, with FABC secretary-general Harriet Mugenda calling the lawmaker a liar and telling him that he was not welcome to future activities of the group.

Mbogo tried in vain to explain himself. "I did not say the protests should stop," he said.

On Monday, Muhuri chairperson Khelef Khalifa said they are not in the business of praising President Uhuru Kenyatta or the government.

"When the government did this, they knew what they were doing," he said.

Mbogo was absent during the Monday protests. His spokesperson, Richard Mwasingo, said he was at the national and county lands offices seeking approval for the building of two primary schools in Mjambere and Magogoni wards.

"We want to build Barani Primary in Mjambere ward and Magogoni Primary School in Magogoni ward. He was held up following up on these crucial things," Mwasingo said on the phone.

Mvita MP Abdulswamad Nassir arrived at the Nyali police station after getting word that the activists and truckers were arrested. He was seen making frantic calls as he tried to secure their release.

But police officers refused to release them saying they had to be prosecuted. They were to be charged at the Mombasa law courts with incitement to violence.

Khalifa said the demos were legal. He said Nyali, Central and Makupa police stations were notified in time. He said they, too, will sue the officers.

"I promise we are taking them to court for disrupting a right to hold a demonstration," Khalifa said.

"This is incitement on the side of the police. They will have to answer."

He told Mombasa county commissioner Gilbert Kitiyo to stop acting like a colonial governor. "We are not his subjects."

He urged Mombasa politicians to stand with the people who voted for them.

The activists say the government lied to Kenyans that the directive they issued had been lifted.

"On the ground, nothing is happening. The cargo is still being forcefully transported via the SGR," Khalifa said.

Nassir said the government has to own up and rectify its mistake.

"This is the livelihood of more than 500,000 people in Mombasa we're talking about. That is not a number to joke with," he said at the Nyali police station.

However, the truckers and the activists want any meeting over the SGR held in Mombasa, where they said the majority of the affected people are.

Jomvu MP Badi Twalib and his Changamwe counterpart Omar Mwinyi have been relatively silent on the matter, despite the fact that most of the truck companies are located in their constituencies.