SEARCH FOR BODIES ON

• MD Bakari Gowa admitted that they have no standby divers or hi-tech equipment to retrieve bodies from the deep sea. 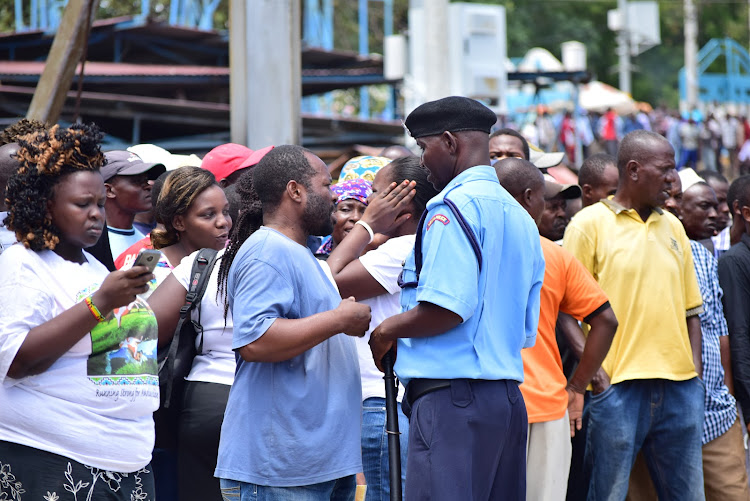 Bad weather and heavy commuter traffic have been blamed for slowing down the search for the vehicle that sank into the Indian Ocean with two occupants.

Also cited is the strategic nature of the Likoni crossing channel. It is the only channel into the Mombasa Port and always has high traffic, with more than 6,000 vehicles and 300,000 commuters crossing daily.

On Tuesday, the Kenya Ferry Services management had a difficult time addressing the media and members of the public.

At 4.50pm, irate and hostile crowds jammed around the briefing area and accused the officials of being inefficient in dealing with ferry disasters.

They heckled and called them names, prompting the management to cut short their statement and opt for a different location.

On Sunday, Mariam Kighenda, 35, and her four-year-old daughter Amanda Mutheu plunge into the sea after their vehicle slid. The vehicle, a Toyota ISIS, was reversed while the ferry was midstream, with motorists and commuters watching helplessly as it sank.

Forty-eight hours later, efforts to recover the wreckage and their bodies were still unsuccessful. The ferry agency announced that they had located two areas where the sunken vehicle could be, one with a seabed that is 75-foot deep and the other with 173-foot deep.

Family spokesperson Luka Mbati said they had contracted private divers and had paid Sh100,000 deposit. He did not disclose the full amount.

But ferry services chairman Dan Mwazo advised the family to get a refund from the government if they paid private divers for help. He said the government will cater for all expenses.

Ferry services were disrupted at intervals of between 30 minutes and an hour as management announced they wanted to allow Kenya Navy, Kenya Ports Authority and private divers to locate the exact area where the vehicle could be.

Mwazo sought to assure the family that the bodies would be retrieved, and if the operation ended unsuccessfully on Tuesday, they would resume at 9am on Wednesday, with the channel being closed for two hours for the operation.

“We believe that the Navy has all the expertise to locate the exact position where the bodies are. They will be retrieved and handed over to the family for a decent burial,” Mwazo said.

By press time, four Navy boats were conducting the search, with Navy and private divers taking charge. The operation was later called off at 5.45pm. A statement earlier released by government spokesperson Cyrus Oguna contradicted with Gowa’s brief to the press, with Oguna saying operations started on Sunday but the MD saying they started on Monday.

“This was an unfortunate incident and, as government, we condole with the bereaved family. We wish to state that we’ve been in contact with the family and will provide any assistance that they may need. We also wish to reiterate that, as a government, we are committed to the protection and safety of all Kenyans,” he said.

Mwazo sided with Oguna that the Navy was at the crossing channel on Sunday but added that it could not do anything due to darkness. While the MD earlier mentioned that they had located the exact position of the vehicle, Mwazo shied away from commenting over the issue and issued a blanket statement that the Navy was doing its job.

Gowa admitted that the ferry agency does not have standby divers or hi-tech equipment to retrieve bodies from the deep sea.

"We depend on Kenya Navy and the KPA when a disaster occurs on the channel," he said on Tuesday, his second press briefing since the incident happened.

On Tuesday, at around 11.40 am, private divers contacted by Mariam's family went into the sea for the first time. At 1 pm, Gowa issued a directive that ferry services be stopped for 30 minutes.

"Navy officers have identified two areas within the channel. One area is about 75-foot deep and another area is 173-foot deep. We are closing the channel for 30 minutes to give the divers some ample time to conclude their exercise," said Gowa.

The operations resumed after about an hour, but no word was coming from the management. At around 4.15 pm, the Managing Director and Mwazo arrived at the channel.

Oguna said the government had initiated a rescue effort and mobilised a multiagency team that comprises divers and other experts from the Kenya Navy, the ferry agency and Kemfri.

He said the government was also putting in place measures to improve procedures at all crossing points to enhance the safety of commuters to avert accidents.