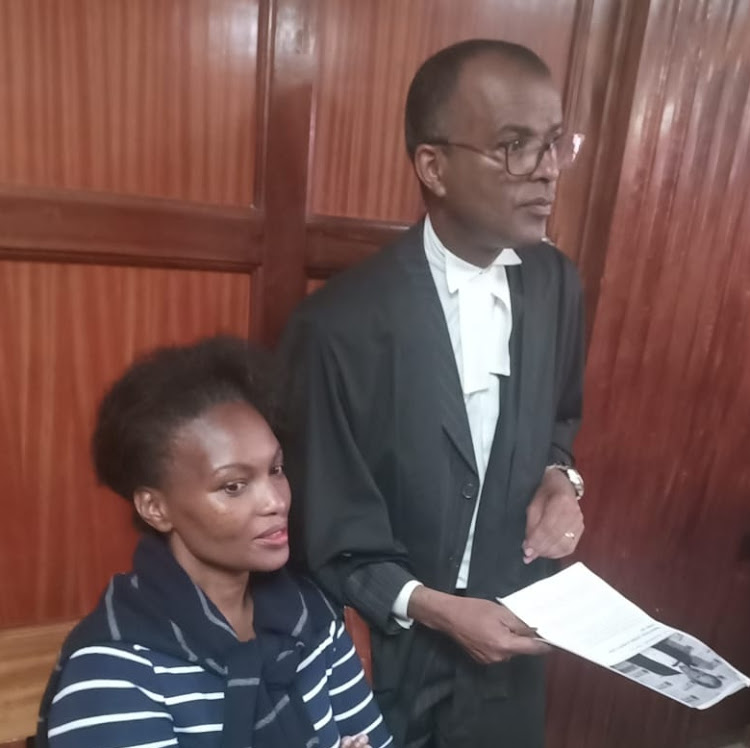 Sarah Wairimu's lawyer, Philip Murgor, and deputy DPP Catherine Mwaniki on Tuesday engaged in a war of words over his status at the DPP.

The widow of slain Dutch businessman Tob Cohen, Sarah, failed to take a plea for the second time following the contention.

Last week when she appeared in court, Cohen's family lawyer Cliff Ombeta opposed Murgor's representation of Wairimu arguing that he was still a public prosecutor since his gazette notice had not been revoked even though he resigned.

On Tuesday, assistant DPP Catherine Mwaniki confirmed to court that Murgor was appointed as a public prosecutor in January but the gazette notice has not been revoked.

She told Justice Stella Mutuku that they were in the process of revoking the appointment by writing to the Attorney General but before that is done he can’t represent Wairimu.

Ombeta said Murgor should step aside from handling the case until his appointment is revoked.

“My lady, let's not proceed with this case while he is on record because we might end up with a mistrial,” he said.

But Murgor insisted he resigned from the position of public prosecutor on March 7 this year.

Murgor claimed he even sent a WhatsApp message of his resignation letter to DPP Noordin Hajji.

According to Murgor, the issue of gazette notice revocation is an afterthought to delay the case by the prosecution.

He said it was the DPP's job to revoke the gazette notice, arguing that it means that it did not matter to them.

“Only DPP Haji can swear an affidavit to confirm if I am still an employee under his office and he has chosen not to,” Murgor said.

Murgor told the court that he had never received a single cent from the DPP as salary, so there was no way he could be their employee.

“To deny the accused the advocate of her choice is unconstitutional. The objections should only be on solid reasons,” Murgor said.

Murgor wondered whether it meant from March 7 until now he should not have practiced because the DPP has chosen not to do their job of revoking the gazette notice.

Murgor sensationally accused prosecutor Mwaniki of being malicious, saying she reports to interested parties in the case.

But Mwaniki dismissed his claims telling the court that as a prosecutor she was not barred from talking to victims.

She aske Murgor to bring evidence that she was colluding with politicians in the case.

Ombeta insisted Murgor should make sure the gazette notice is revoked before representing his client.

Justice Mutuku ruled on a contempt application and ordered Mwaniki and the complainants to file affidavits to support their allegation that Wairimu was in contempt of court when she addressed the media at Cohen’s burial.

Murgor said he would file a contempt of court application to commit DCI George Kinoti to jail for talking to the media when the court had gagged all parties in the case.

The case was adjourned to Thursday when the court will rule on whether Murgor is still a public prosecutor before Wairimu takes a plea.

Cohen siblings: We could be killed if Sarah is released on bail

Widow's lawyers dismiss claims, insist there are no grounds to hold Wairimu.
News
2 years ago