How Kenyan banknotes have evolved since the 1905 Rupee

• For the banknotes, the interim currency was commonly known as the “Lake Issue” currency because of the background of Lake Victoria on the notes.

The Kenyan note has evolved over the years since before independence. See story https://bit.ly/2nTqkBw

From a bag flour to a modern type of currency.

The Kenyan note has evolved over the years since before independence.

The notes and coins have had images of retired presidents, animals, athletes and buildings in the evolution pattern.

The area that we now know as Kenya was once part of British East Africa, which also included Uganda and Tanganyika.

As such, Kenya used British currency. The currency that was introduced by the Britons was the rupee, the colonial currency of India and many other British holdings.

The British pound, before it was decimalised, was divided into 20 shillings. In British East Africa, the smaller shilling became the de facto currency of use – rather than the larger, more expensive pound.

The newly established EACB introduced an intermediate currency based on the English Florin with the thought that it would ease the transformation from Rupee to Shilling.

The Florin would be the same size and shape as the Rupee and also be of a silver substrate. 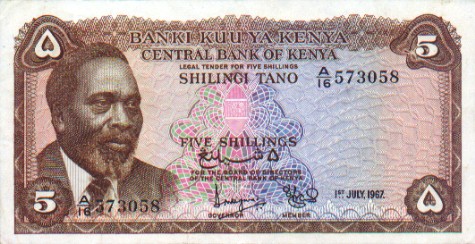 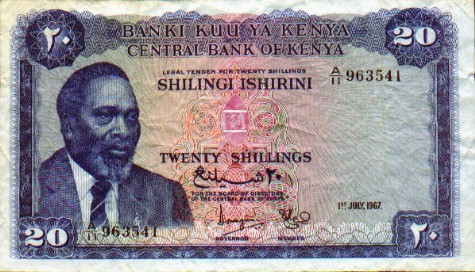 This then became the advent of the shilling in Kenya. The shilling was however interchangeably used with the pound at a rate of 20 shillings to the pound and eventually only shillings and cents were used to independence.

As the East African territories became independent in sequence from 1962 the EACB ceased to issue notes with the image of the monarch and removed her name from the coinage.

There was a desire by the three East African countries to establish a common East African Central Bank. Interim currencies were therefore introduced by the EACB to circulate within the region.

For the banknotes, the interim currency was commonly known as the “Lake Issue” currency because of the background of Lake Victoria on the notes.

The notes all showed a dhow on Lake Victoria which was common territory to the three countries.

The Lake Victoria designed notes were in the denominations of 5, 10, 20 and 100 shillings.

Kenya began printing and minting its own currency under the mandate given to the Central Bank of Kenya. 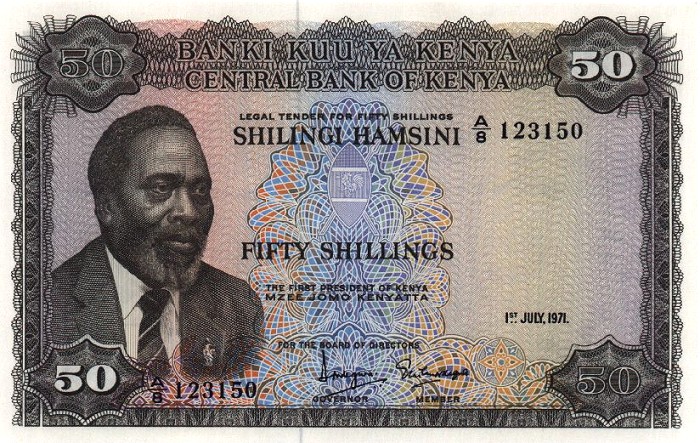 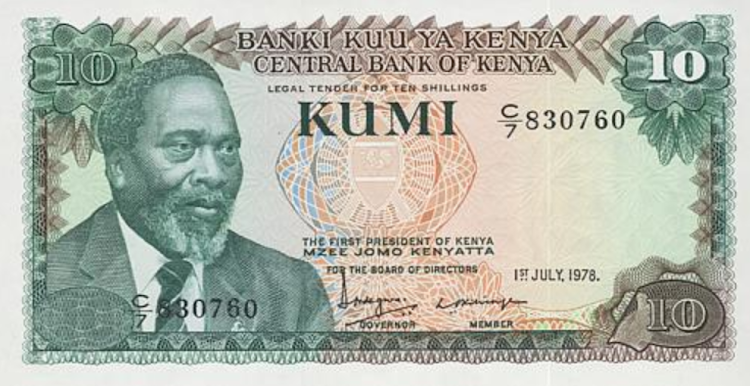 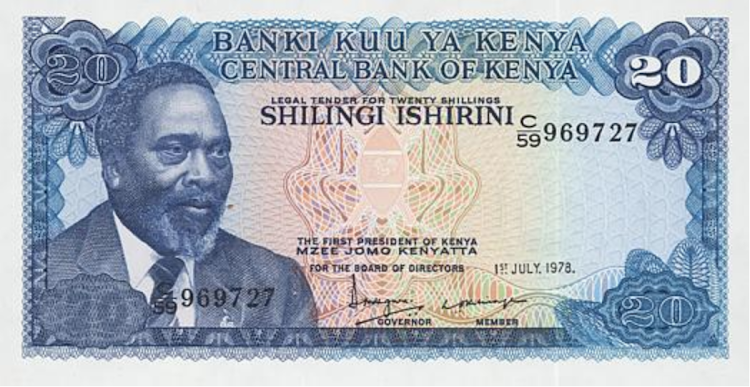 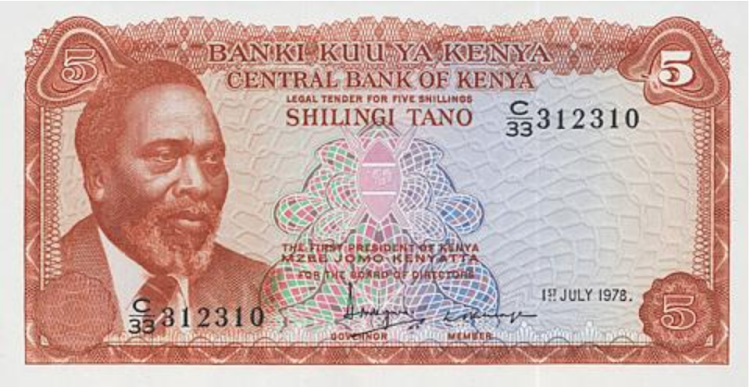 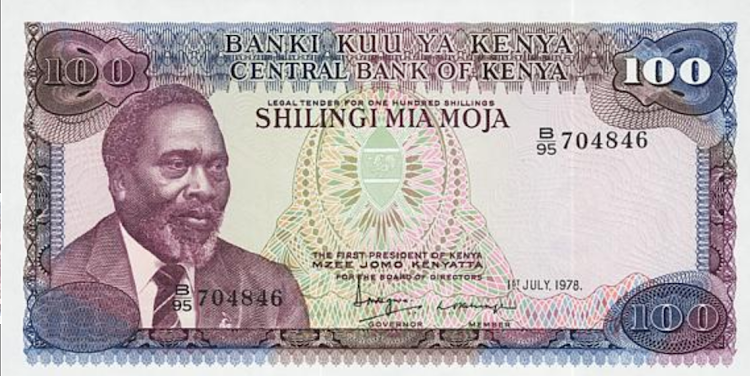 The initial issue of Kenya shilling notes were in the denominations of 5, 10, 20, 50 and 100 shillings, all bearing the portrait of the first President of Kenya, Mzee Jomo Kenyatta, in the front, and diverse scenes of economic activities in Kenya at the back.

These notes were the first using the double title of Banki Kuu ya Kenya and Central Bank of Kenya.

The coins were minted by the Royal Mint of UK and made from cupro-nickel. Like the notes, the obverse featured the portrait of Kenya’s founding father, Mzee Jomo Kenyatta.

The reverse however featured the Kenyan coat of arms, a theme that has remained a dominant feature to the present series of coins. 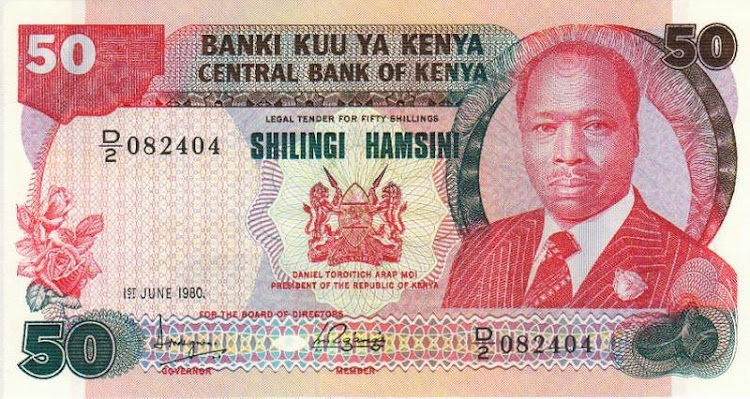 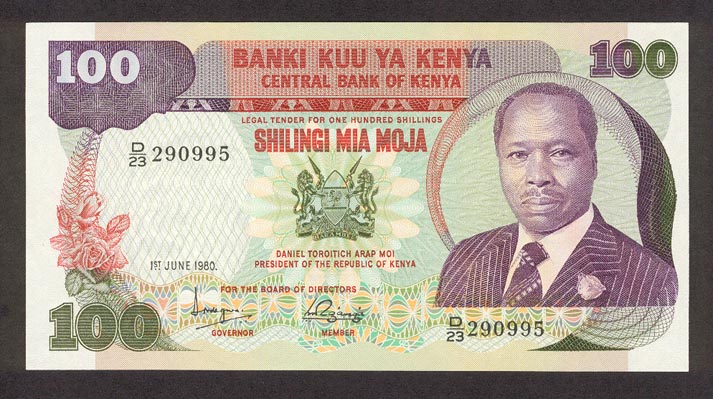 In 1979, a portrait of retired president Daniel Moi replaced Kenyatta's until 2005, when the Central Bank introduced a new coin series that restored the portrait of Kenyatta.

The banknotes are printed in Nairobi by British security printer De La Rue.

In 1980, a portrait of Daniel arap Moi replaced Kenyatta until 2005, when the central bank introduced a new coin series that restored the portrait of Kenyatta.

Kenyan notes were redesigned and emblazoned with Moi's face to usher in his era. 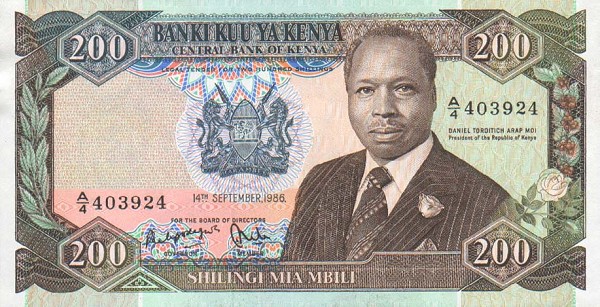 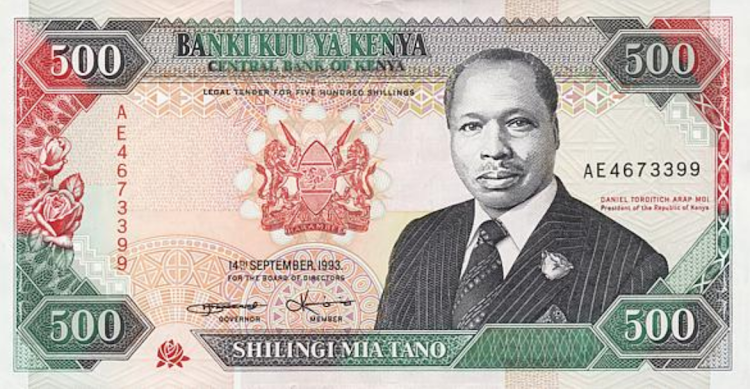 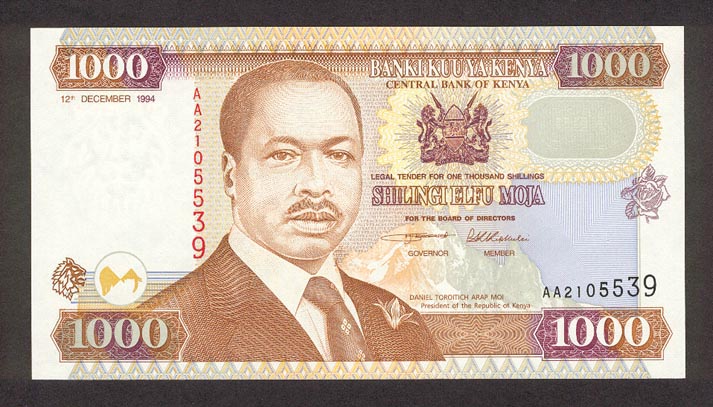 Kibaki, who won elections in 2002 ending Moi's 24-year rule, broke a promise not to have his image printed on money.

A new Sh40 coin bearing a portrait of President Kibaki was launched contradicting his election pledge to keep his image and his name off the currency, public buildings and roads.

Kibaki also launched two commemorative coins - a gold one with a face value of Sh5,000 and a silver one valued at Sh1,000 - both of which bore his likeness.

The Sh40 coin went into circulation to mark 40 years of independence. This was a way to celebrate the independence day.

But Kibaki did not stop it at this, two years into his reign, he removed Moi's portrait from the notes and replaced it with Kenyatta's.

After removal of Moi's from the Kenyan currency, Kenya voted in the 2010 constitutional referendum to get rid of individual portraits on the money.

The Constitution of Kenya 2010 states that notes and coins shall not bear the portrait of any individual.

“Notes and coins issued by the CBK may bear images that depict or symbolise Kenya or an aspect of Kenya, but shall not bear the portrait of any individual,” reads Section 231(4) of the Constitution.

Many Kenyans saw this as an attempt by their leaders to promote themselves and to personalise the state. 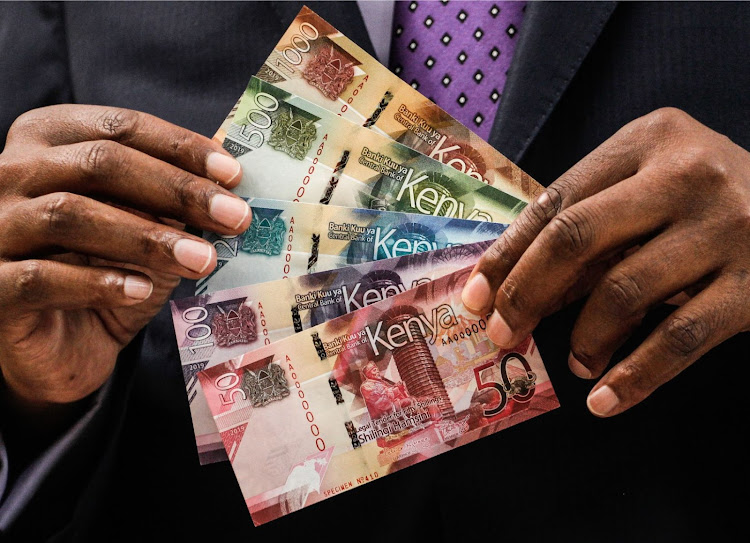 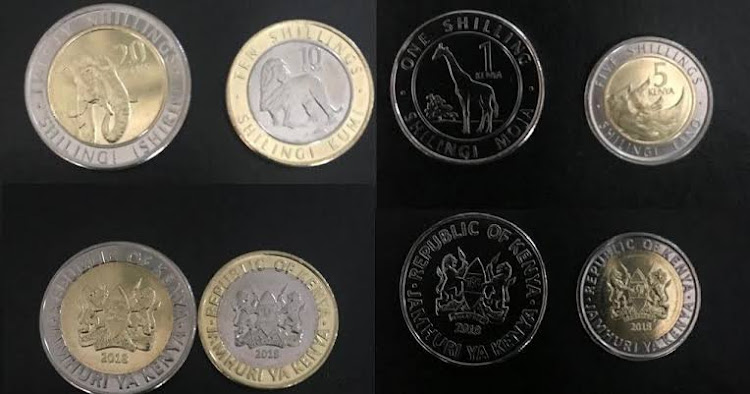 And on Madaraka Day this year, the new-look notes are fashioned to enable the visually-impaired to use them, were unveiled.

The Sh1 coin will now bears the image of a giraffe, the Sh5 coin a rhino, the Sh10 a lion and the Sh20 coin will spot an elephant.

The coins have also been minted with embossed features that will make them easy to identify.

Why it will be tough to get new notes in bulk

High court rules that CBK was right to use the image of Mzee Jomo Kenyatta on the new notes
News
9 months ago
STAR COMMUNITY POLICY AND PARTICIPATION GUIDELINES
by NANCY AGUTU Senior Digital Reporter
News
30 September 2019 - 16:10