Wairimu raises questions over the property that was allocated to Cohen’s sister.

• According to Wairimu, Kinoti’s responsibility is to investigative criminal cases and not ownership of property or matrimonial issues.

• Wairimu claimed that Kinoti is determined to hand over the keys to her matrimonial home to the 'purported beneficiaries' of her husbands alleged Will. 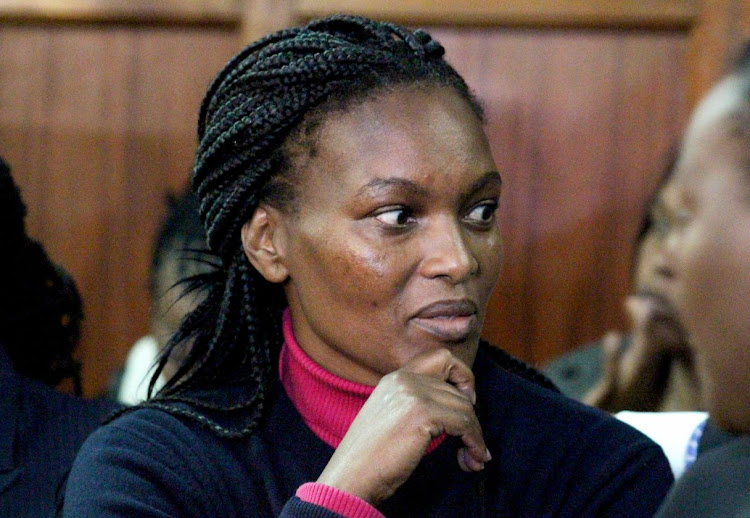 Sarah Wairimu the wife to the Missing Dutch tycoon Tob Cohen at the Milimani Law Court in Nairobi on September 12,2019. PHOTO/ENOS TECHE

Sarah Warimu, the widow to murdered Dutch national Tob Cohen has questioned the intention of DCI George Kinoti in the entire murder case.

In an affidavit filed in court on Thursday, Wairimu raises questions on the alleged intent of Kinoti over property that was allocated to Cohen’s sister Gabrielle Van Straten.

The Star had reported that Cohen had giver her sister his Sh400 million Kitisuru villa alongside other properties, at the time estranged to his wife, now accused of killing him.

According to Wairimu, Kinoti’s responsibility is to investigative criminal cases and not ownership of property.

"I am aware that the second respondent through Kinoti has gone well beyond its mandate to publicize section 96 of the law in a manner that paints me as being guilty of the offence of murder and therefore locked out of my right to inheritance even before this court conducts my trial," she said.

"The respondent has clearly impugned my right to my matrimonial home."

Wairimu claimed that Kinoti is determined to hand over the keys to her matrimonial home to the 'purported beneficiaries' of her husbands alleged Will.

"After opening of the Will, Gabrielle and her husband had no further use for my husband and promptly left the country despite publicly stating that they wanted to accord Cohen a decent Jewish burial," she said.

Gabrielle, Cohen's sister, flew out of the country a day after his will was opened.

Warimu rejected an invitation to witness the opening of her late husband's will. In a letter by her lawyer Philip Murgor, Wairimu said the confidentiality of the document had been impugned.

In the affidavit, Wairimu further reveals how she learnt that two unnamed Kiambu politicians claimed Cohen owed them Sh35million.

Wairimu said she unearthed this during the opening of his husbands Will.

"I learnt that the Will opening ceremony was attended by a politician one Patrick Muiruri and that two Kiambu politicians were claiming to be owed a sum of Sh35 million by my late husband," she said.

"... I am not aware that my late husband owed such a colossal amount of money to anyone let alone Kiambu politician and will in due course request that these claims be investigated."

Cohen's body was on Tuesday afternoon moved from Chiromo mortuary to the Jewish cemetery on Wangari Maathai Road for the final rites.

The Dutch billionaire's body was found last Friday afternoon — eight weeks after his disappearance —in an empty underground water tank at his Kitisuru residence. His body was wrapped in many layers of black plastic.

Cohen also willed a huge sum of money said to be in hundreds of millions to his brother.
News
2 years ago

She denied claims in the media that Cohen willed their 400 million house to his sister.
News
2 years ago
by NANCY AGUTU Senior Digital Reporter
News
26 September 2019 - 14:22