According to the report, Mandera County was leading in the attacks.

• Out of those killed 23 were police officers, 16 were civilians and eight were al shaabab militants.

• According to the report, Mandera County was the leading county in the attacks. 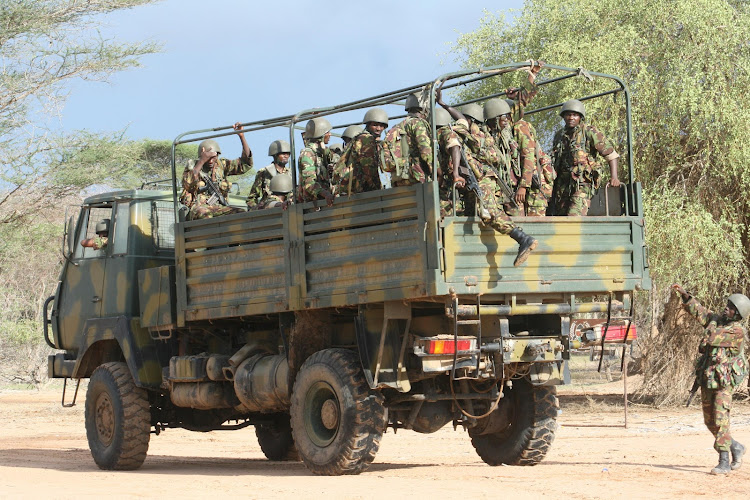 Military embark on truck at Liboi border point to cross over to Somalia to fight Al Shabaab./FILE

Al Shabaab attacks on Kenyans has decreased significantly, a crime report has found.

The 2018 report released by National Police Service on Tuesday indicated that there were 44 recorded cases of terror attacks in 2018 as compared to 80 in 2017.

As a result of these incidents, 49 people were killed and 41 injured. In the 2018 report, 38 suspects were arrested.

Out of those killed 23 were police officers, 16 were civilians and eight were al shaabab militants.

This is a decrease from 2017 where 82 people were killed and a total of 118 persons Injured.

The attacks which mostly targeted security personnel led to the injury of 33 police officers and eight civilians.

According to the report, Mandera County was the leading county in the attacks.

It recorded 19 cases which account for 40 per cent of the total incidents.

Al Shabaab grew out of a political movement that used Islamic courts to impose order on war-ravaged Somalia.

Kenya sent troops there in 2011 after al Shabaab started recruiting and kidnapping on Kenyan soil.

As al Shabaab morphed from a nationalist insurgency into an al Qaeda franchise, it increased its messaging to other nationalities.

They are among a growing number of Kenyans with no family links to Somalia drafted by the militants.
News
3 years ago

Al Shabaab was pushed out of the capital Mogadishu in 2011, but retains a strong presence.
News
3 years ago
Post a comment
WATCH: The latest videos from the Star
by NANCY AGUTU Deputy Digital Editor
News
18 September 2019 - 10:12
Read The E-Paper