Having a viable population may take 50-70 years 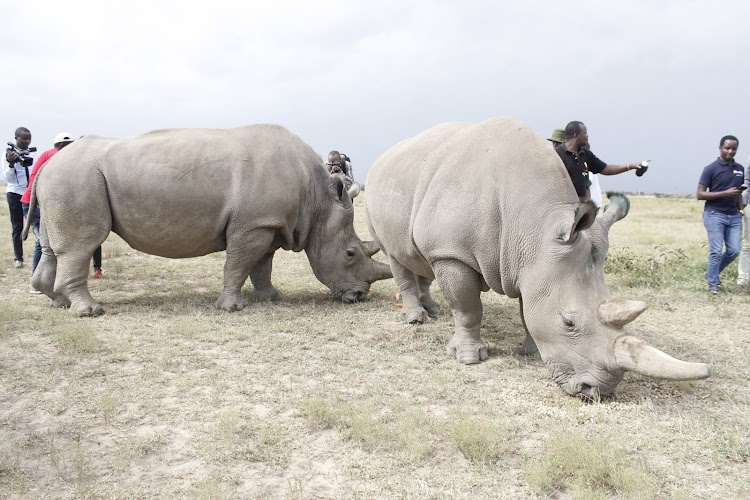 Two of the last remaining northern white rhinos in the world Najin and Fatu feed on carrots at Ol- Pejeta Conservancy in Laikipia County on August 23rd. A team of veterinarians did a successful egg harvest which broke new ground in saving the Northern White Rhinoceos. The eggs will now be be artificially inseminated with frozen sperm from a Nothern white rhino bull, and in the near future the embryo will be transferred to a southern white rhino surrogate mother.
Image: MOSES MWANGI

Harvesting eggs from northern white rhinos a step closer in restoring its numbers.
News
3 years ago

Having a viable northern white rhino population will not be an easy task after all.

The International Rhino Foundation says recovering immature eggs and maturing them through in vitro procedure is a difficult, particularly when eggs are being recovered from females with reproductive issues.

"Developing a viable pregnancy and having the surrogate carry it to term with a successful delivery is another hurdle," the foundation says.

In vitro fertilisation is a complex series of procedures used to help with fertility or prevent genetic problems and assist in conception.

On August 22, a procedure of harvesting eggs from the last northern white rhino females -Najin and Fatu- took place.

The two rhinos live under close protection in a semi-wild environment at Ol Pejeta Conservancy.

On September 11, a joint team of veterinary officers and conservationists announced that two northern white rhino embryos had been successfully matured and fertilised.

The two embryos were created using eggs collected from Fatu, the youngest of the  rhinos and frozen sperm from Suni - a deceased northern white rhino male.

After 10 days of incubation, two of Fatu’s eggs developed into viable embryos that were cryopreserved for future transfer.

Najin’s eggs did not make it to a viable embryo despite the fact that one egg initiated segmentation. Artificial insemination was not an option because neither Najin nor Fatu can carry a pregnancy.

In 2009, Sudan and another male named Suni —  together with two females which were Sudan’s daughter Najin and granddaughter Fatu — were relocated to Kenya from the Czech Republic.

Seven other white rhinos were moved from the Dvůr Králové Zoo in the Czech Republic in 2009, but they struggled to produce an offspring.

Although mating attempts were witnessed, there were no pregnancies.

Despite uterine dysfunctions, however, Fatu and Najin’s ovaries still could carry viable oocytes.

The eggs had to be extracted and fertilised outside the womb. The next step is to implant embryos into a southern white rhino surrogate.

"Once it is reliable, ART may play a vital role in securing the future for rhino populations," International Rhino Foundation says.

The foundation supports applied research that can help to improve the chances for the long-term survival of all rhino species.

The long-term objective of the project is to reintroduce northern white rhinos and future offspring into secure habitats within their former range.

This objective may only be realised in 50-70 years.

By increasing the number of populations, the overall risk to the northern white rhino will be spread and reduced.

After the foundation of a viable breeding nucleus at Ol Pejeta, new populations can be translocated to create or reinforce existing white rhino populations with northern white rhino genes.

Despite the progress made, there are issues with starting up a population from just a few individuals.

There are inbreeding issues with a small number of founders, particularly if any of the animals are related.

For this reason, the conservation strategy for the northern white rhinos in Ol Pejeta will include utilisation of genetic samples that are cryopreserved in special cryo-banks.

For example, semen from four already dead northern white rhino males can be used for assisted techniques of reproduction.

With careful conservation management, small rhino populations are able to reproduce at over 10 per cent per annum and recover from very small to large healthy populations.

This was achieved with the southern white rhino in South Africa, where numbers recovered from less than 50 animals to the current total of approximately 20,000 animals.

Recently, there have been other important Assisted Reproductive Techniques for rhinos.

In May, reproductive scientists from the South-East Zoo Alliance for Reproduction and Advanced Conservation induced ovulation in a greater one-horned rhino and used AI to produce a calf at Zoo Miami.

In 2014, the Cincinnati Zoo and Botanical Garden’s Center for Conservation and Research of Endangered Wildlife and the Buffalo Zoo in New York, produced a greater one-horned rhino calf using AI.

They used the sperm of a deceased male who never contributed to the gene pool of the species during his lifetime.

Poaching— in particular for their horns, which are believed to have medicinal properties in some countries remains rhinos major threat.