Says she has been in detention for 17 days, had no opportunity to do anything in her house.

•The detectives were led by the Director of criminal investigations George Kinoti who inspected room by room. 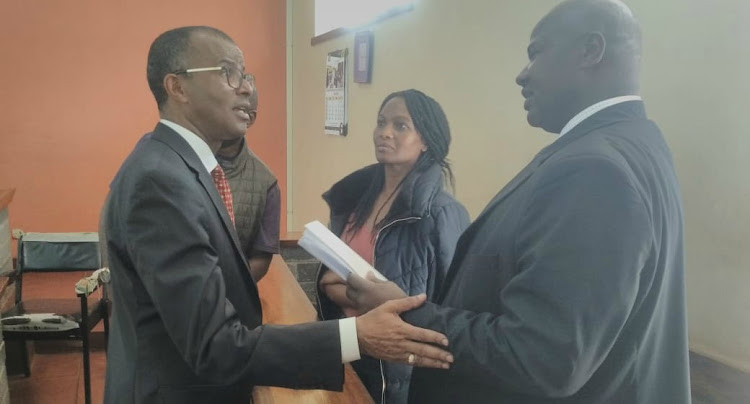 Lawyer Philip Murgor has dismissed claims that Sarah Wairimu had a hand in the alleged murder of her husband Tob Cohen.

Murgor spoke a day after the body of Dutch tycoon Tob Cohen was retrieved at his Kitisuru home on Friday from an underground tank which had fresh cement plastered around it.

"Wairimu has been in detention for  17 days. Wairimu had no opportunity to do anything in her house," Murgor said in a press conference on Saturday.

Murgor said that on the two occasions her client Wairimu accessed her Kitisuru home, it was under the escort of detectives.

He said the DCI detectives embarked on a three-day house search from Tuesday,  September 10.

The detectives were led by the Director of criminal investigations George Kinoti who inspected room by room in a search that he terms thorough.

"On Tuesday, the detectives called me and said they were taking my client (Wairimu) to the crime scene (Kitisuru home). I joined them. On arrival, they inspected Cohen's car, carpet, kitchen, golf kits, secret room. It was a thorough examination," he recounts.

On two occasions Wairimu went home to change her clothes and take a bath but she was escorted by the DCI detectives. The DCI had access to her home since then.

He said the detectives did a '99 per cent' of the search on Tuesday.

The detectives he said took the house keys from the watchman to access the house the next day.

Upon taking the keys, the watchman and the gardener were asked to remain indoors during the ongoing search.

"They kept the keys on Tuesday night. On Wednesday they carried on with the search but they did not finish," he said.

Murgor said on Tuesday only the corner where the body was found and the opposite side was not inspected.

He, however, noted that on Wednesday when detectives stumbled upon the manhole in the garden area they asked to proceded with the search on Thursday.

EXCLUDED FROM THE SEARCH

On Thursday the detectives proceeded with the search without the lawyer and Wairimu.

"I called one of the detectives and he said they were proceeding to the Kitisuru home for a search. I asked them how they could proceed on with a search without us. Myself and Sarah," he said.

Murgor said when they arrived at the home, they found a large number of detectives compared to the previous days.

Wairimu on Thursday was arraigned before a Nairobi court but she did not take a plea until she undergoes a mental examination.

Assistant DPP Catherine Mwaniki asked the court to remand Wairimu before she takes a plea.

However, her lawyer Philip Murgor opposed the application arguing that there was no body.

Murgor maintained there was no evidence linking his client to the alleged murder because there are no witness statements.

Director of Criminal Investigations George Kinoti described the murder of Dutch as gruesome.

"He was murdered in his residence. It was a gruesome murder. They took their time to kill him," he said.

His wife Wairimu was arraigned on August 22 over links to his disappearance.
News
2 years ago

Kinoti said Cohen was bound face, hands, neck before he was murdered.
News
2 years ago