Despite legal advice, IEBC chair and commissioners directed Muli to register ex-footballer but she declined

• Muli refused to clear ex-footballer because his name was missing from voter's roll.

• She feared she would be held personally liable for any election malpractice. 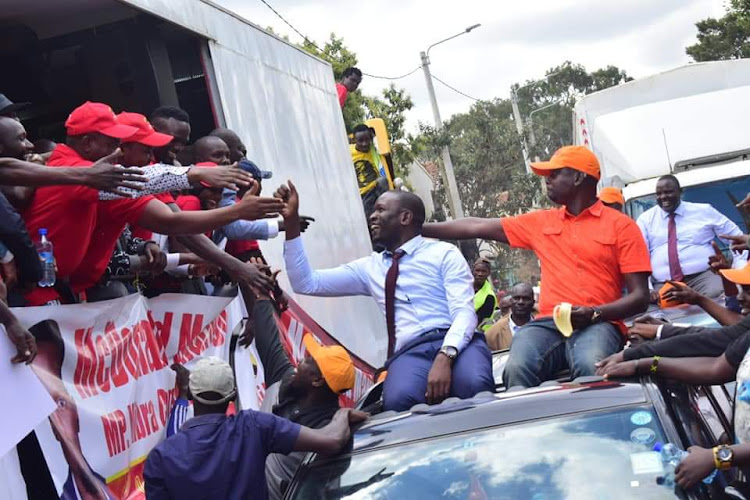 IEBC chairman Wafula Chebukati and his two commissioners ignored advice from their own legal team and ordered the returning officer in Kibra to clear Mariga.

Both the legal and ICT teams advised the commissioners that Mariga, who is being fronted by DP Willliam Ruto, should not be cleared because he had not been duly registered.

The two teams explained that Mariga, who had not been registered previously anywhere, dashed to Kariakor on August 26 where he applied for registration, nearly two weeks after National Assembly Speaker Justin Muturi had declared the seat vacant.

According to section 5 (1)b of the Elections Act, all electoral activities including voter registration must stop upon declaration of a vacancy.

"Mariga applied for registration on August 26 after the vacancy was declared on August 14 and IEBC gazetted the by-election on August 16, two days later. By law, the application must be brought to headquarters and all details confirmed before they can be put in the voters' roll. Once that is done the register will have to be gazetted.

"In this case, Mariga's application is still pending. He cannot, therefore, be cleared to vie," said an IEBC official.

But despite the written opinion by the legal team, commissioners — Chebukati, Abdi Guliye and Boya Molu — met on Wednesday and ordered  Beatrice Muli, the returning officer, to clear Mariga.

But Muli declined to clear the ex-footballer because his name was missing from the voter's roll.

It is understood that Muli also feared that she would be held personally liable for any election malpractice.

"The law is very clear that IEBC election officials will be held personally liable for any electoral offence. She refused to commit an offence," said another IEBC official.

The Independent Electoral and Boundaries Commission barred Mariga from presenting his nomination papers after the last-minute discovery that his name was missing from the register of voters.

The move is threatening to completely block Jubilee from presenting a candidate is the mini-poll.

Mariga thanked the party for believing in him and assured that he is equal to the task.
News
2 years ago

Pro-handshake crusaders within the ruling party who are linked to  President Uhuru Kenyatta have been opposed to a Jubilee candidate taking on Opposition chief Raila Odinga in the November 7 poll.

"We have invalidated Mariga's nomination," Muli declared, triggering a nasty confrontation with Jubilee leaders who for the first time termed the commission as incompetent.

Mine was to confirm that the aspirant meets requirements. I have verified and checked and I could not find his details.  At this point my hands are tied

But his troubles did not come as a surprise and have been a matter for speculation within Jubilee circles.

Last week, the Star exclusively reported that Mariga may be locked out for only registering as a voter two weeks ago for purposes of the Kibra poll.

Mariga was listed as a voter in Kariakor and may not be considered as a registered voter in Kenya just yet because the updated register has not been gazetted as required by law.

Unconfirmed reports also indicate that Mariga could have changed his age in his original ID card that may put him in legal problems.

Lawyer Kethi Kilonzo found herself in an almost similar situation in 2013 where she was prosecuted for fraudulently acquiring a voter’s card.

Jubilee secretary general Raphael Tuju had initially raised concerns at the haste in which Mariga’s name alongside other names were being sent to the electoral commission.

When interviewed by the media, Mariga said it was simply sad and asked his supporters to wait for the appeal.

Lang’ata MP Nixon Korir, infuriated by the decision, said it was regrettable that Mariga was not cleared even though he met all the requirements.

“He is registered by the voter register they were using was that of 2017. Administrative incompetence of the IEBC should not deny Mariga his democratic right of contesting for the seat,” Korir said.

“No one has the power to take such a right from any Kenyan. Our campaigns will continue unabated because we know that Mariga will be cleared,” he maintained.

Speaking after presenting its candidate Imran Okoth with the nomination certificate, ODM director of elections Junet Mohamed expressed confidence that the party will emerge victoriously.

IEBC returning officer Muli indicated that over 30aspirants had shown interest to contest for the seat. She, however, said a number of them, particularly the independent candidates, were sent away for not having been supported by at least 1,000 registered voters in the constituency while others could not present their academic credentials or other required documents for clearance.

By the time of going to press, Muli had confirmed 15 candidates as having been cleared.