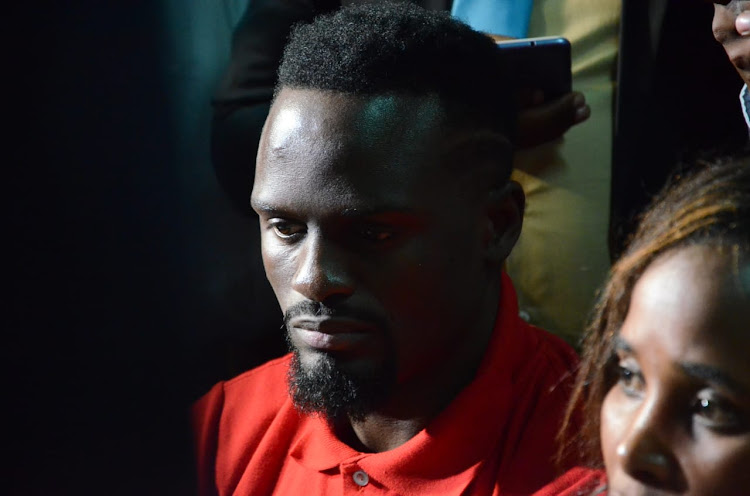 MacDonald Mariga after he was blocked from Kibra by-election on Tuesday, September 10, 2019.
Image: DOUGLAS OKIDDY

Former Harambee Stars footballer MacDonald Mariga's bid for the Kibra MP seat has hit headwinds after his name was discovered to be missing from the IEBC register of voters.

"We have invalidated Mariga's nomination," she said.

Muli said other documents presented to them were in order.

"Mine was to confirm that the aspirant meets requirements. I have verified and checked and I could not find his details.  At this point my hands are tied," she added.

Lang'ata MP Nixon Korir and former Kakamega senator Boni Khalwale tried to convince the commissioner to take her time and relook for his name. 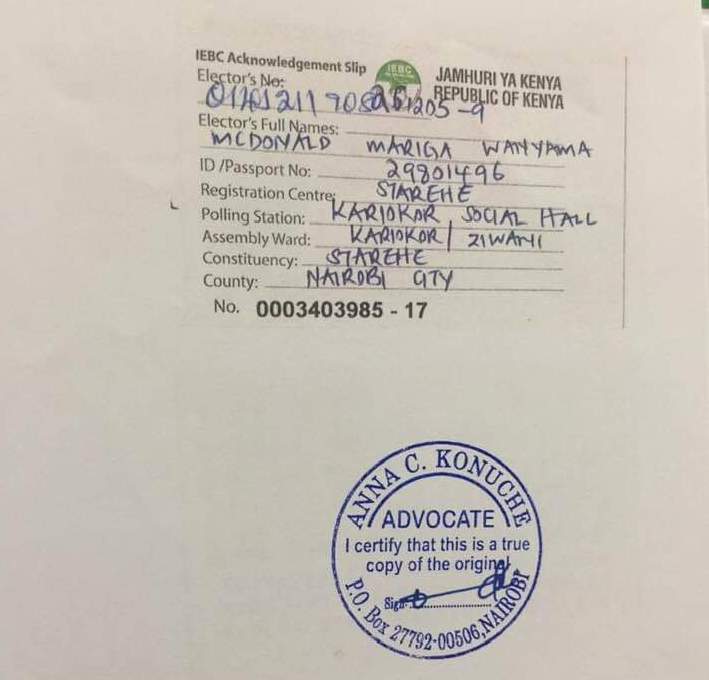 A copy of an registration acknowledgment slip that Mariga presented to the Returning Officer.

"So long as a Kenyan is qualified to vote or vie and has made that application to IEBC, the IEBC can take their time. Can take one week, one year or 10 years but that person cannot be denied his rights to vote or vie," Korir said.

"We are very disappointed people. It does not matter when he registered, the IEBC should ensure he is in the register. A Kenyan should not be denied the right to vote or to be voted for. We will file a case with the IEBC and in seven days will have the verdic."

Khalwale said, " I have evidence that my candidate is a voter and has an election card number. This is very serious."

"What has happened is a temporary intervention. Nobody or individual has the right to take away a single right of a Kenyan. The campaign will continue and come November 7, we will ensure Mariga's name is in the race. Supporters should worry not. Wakili atashughulikia (the lawyer will deal with it)."

Mariga has seven days to appeal the decision to block him.

He said he would fight for his rights.

"Mmetembea na mimi na tutaendelea na elections. Ni lazima nipate rights zangu za kuwa mp kama mimi ni registered voter (You have walked with me and we will continue with the election. I must have my right to run for MP since I'm a registered voter," Mariga said.

Khalwale said what had happened was a temporary hitch, adding the party will work to ensure Mariga is on the ballot.

The Jubilee Party had earlier on Tuesday issued Mariga a nomination certificate.

Presenting the certificate to Mariga was party secretary-general Raphael Tuju who called for a peaceful campaign period and election.

"We should all remember that there will be a winner and a loser but we will all remain to be Kenyans," he said.

Mariga thanked the party for believing in him and assured that he is equal to the task.

Four members of the Elections Board gave Mariga more than 80 marks out of a possible 100.
News
2 years ago