Jubilee paraded a section of the aspirants who lost the party nominations in a public show of unity following a bitter falling out over the controversial nomination of football star MacDonald Mariga. 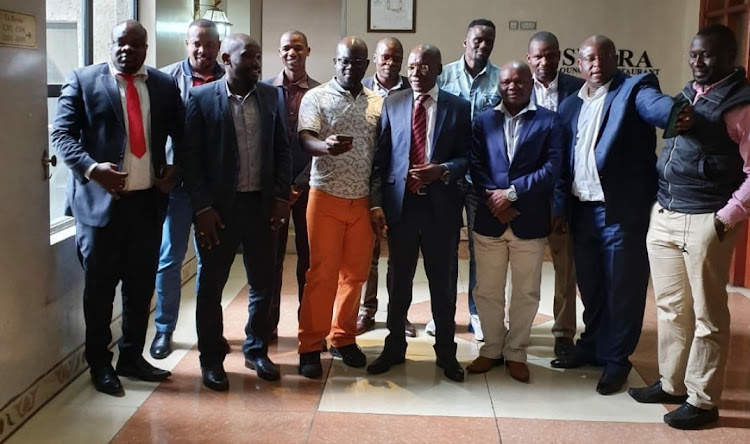 Lang'ata MP Nixon Korir and former  Kakamega senator Boni Khalwale were among the team that led the reconciliation.
Image: COURTESY

ODM yesterday assured Kibra by-election aspirants that tomorrow's primaries will be free, fair and transparent even as Jubilee struggles to tame a post-nominations falling out.

The opposition chief Raila Odinga's party said the National Elections Board had by yesterday finalised preparations for the nominations through universal suffrage.

National Elections Board chairperson Judy Pareno said the county security team had promised them maximum security during the nomination.

The board said every polling station will have a presiding officer, two clerks and two police officers.

The party membership register will be availed and members will be required to carry their national Identification Cards.

The NEB said it will disqualify candidates who will break nomination rules or cause violence.

A three-member tribunal will sit on Sunday to listen to any dispute and make a determination in readiness for the winner’s name to be presented to the IEBC on Monday ahead of the November 7 by-election.

The ODM nominations were earlier set for August 31.

Jubilee yesterday paraded a section of the aspirants who lost the party nominations in a public show of unity following a bitter falling out.

The press conference was attended by at least five aspirants who declared their support for retired footballer MacDonald Mariga.

Morris Peter Kinyanjui, who had filed an appeal with the party's elections board was absent as well.

The Kibra constituency by-election is scheduled for  November 7.
News
2 years ago

The National Election Board yesterday met with the aggrieved aspirants who later  addressed a press conference at the party headquarters where they declared their support for Mariga.

But for Mariga, Lang'ata MP Nixon Korir, and former Kakamega Senator Boni Khalwale, there was no senior party official present, signalling the divisions rocking the party over the nominations.

Daniel Orogo and Jack Owino said the party gave them a fair hearing and they agreed as a group to support Mariga.

“Our issues were heard in an amicable way, though not conclusively, we reached an agreement,” he said.

Mariga thanked the aspirants for agreeing to support him.

“I want to thank President Uhuru Kenyatta and Deputy President William Ruto, my fellow aspirants and the party as a whole for giving me this opportunity to contest for the seat,” he stated.

ODM Secretary-General Edwin Sifuna said the party has provided all the assistance to the NEB for a free and fair exercise.

Tuju confirmed to the Star that an appeal had been launched against Mariga.
News
2 years ago
by ALLAN KISIA Political Writer
News
06 September 2019 - 05:00