• Water has turned green with foul smell emanating from it. 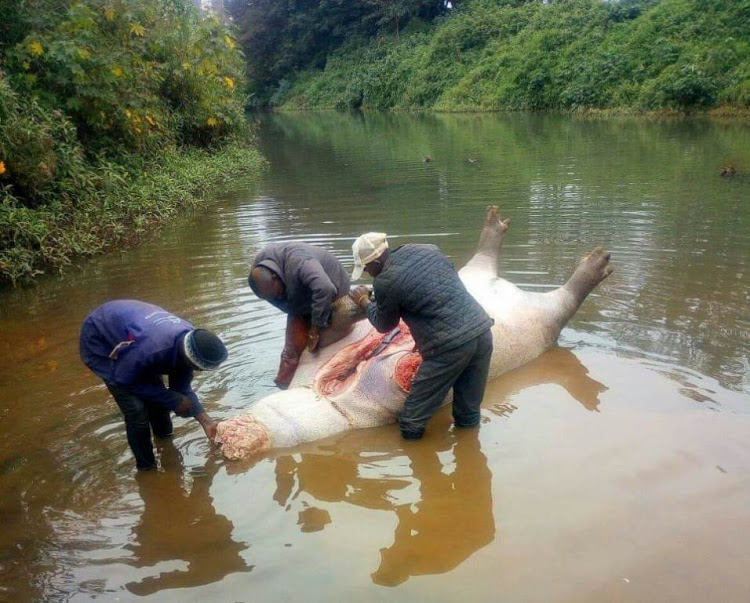 CHINESE NATIONAL ON THE DOCK FOR RELEASING TOXIC EFFLUENTS INTO RIVER CHANIA Some youths slaughtering a hippo that died in River Chania allegedly from toxix effluenyts being released by factories into the river. the Hippo was however burnt by public health officials.
Image: John Kamau

A Chinese national has been accused of polluting the environment and working without a permit in Thika.

A multi-agency team arrested Lin Xian Hua, the proprietor of Benco Investment Ltd that makes tissue papers. The factory was closed down.

Kiambu county commissioner Wilson Wanyanga said the factory lacked a proper system to treat its waste water before releasing it to the environment.

The team was responding to complaints from Thika residents pollution of River Chania. It inspected factories in Thika town that are suspected to pollute the environment.

Residents accused some factories in UTI, Munene, and Gosheni of releasing raw sewerage and toxic effluents into the river which they depend on for domestic use and irrigation.

“The river has turned into white foam and some parts are green due to heavy pollution. A foul smell emanating from the water can be felt 500m away. This is the water people downstream use for domestic purposes. We have stopped farming because our crops wither within days,” resident Githii Mwangi said.

Mwangi, who hails from Gosheni village, said that last month a hippo suspected to have died due to toxic factory effluents was retrieved from the river. He said fish and frogs have not been spared either by the pollution.

He accused the authorities mandated to protect the environment including Nema  of dragging their feet in curbing the pollution saying that they have raised the matter with the authorities and no action has been taken.

"Whenever we raise the issue with them the visit this place and assure us of taking action against those behind the pollution. but as soon as they leave, the factories resume operation and discharging of raw sewerage and lethal effluents continues. they must up their game," he said.

There is rapid growth and spread of water hyacinth in the region’s largest river, River Chania, in Thika.The weed has invaded sections of the river, ...
Counties
4 years ago
by JOHN KAMAU Correspondent
News
06 September 2019 - 00:00