• Deputy president said that whoever who will succeed the Late Kibra MP Ken Okoth must emulate his works in promoting education among Kibra kids. 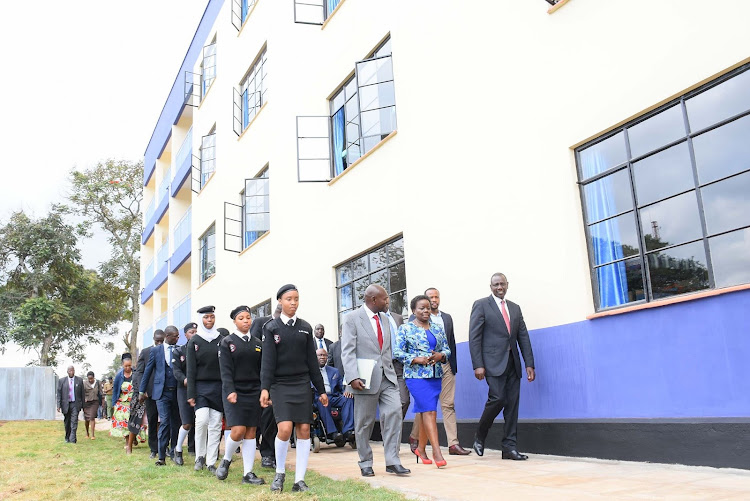 At the opening of a 580-bed capacity dormitory at Moi Girls School, Kibra, Nairobi County on September 3, 2019
Image: DPPS

Deputy President William Ruto on Tuesday evening addressed the residents of Kibra and promised to return for by-election campaigns.

The DP was in Kibra only a day after his Jubilee Party settled on Macdonald Mariga as its candidate in an area that has been dominated by ODM.

Ruto spoke after the opening of a 580-bed capacity dormitory at Moi Girls School, Kibra, two years after a fire razed dormitories in the school.

The DP was mobbed by residents who sought that he addresses them as he drove from the school.

"Leo nilikuwa nimeletwa na mambo ya masomo lakini ntarud. Hiyo maneno nyingine... mimi naona kuna jamaa anasema sijui aiiih lakini ntarudi (Today I solely came concerning education but I'll be back to discuss the 'other issue at hand. There is a guy saying things. But I will be back)," he said.

Asked when he would be making the visit by the Kibra residents, Ruto asked them when they would want him back.

They responded with shouts of Sunday and the DP said that he would consider it.

He said  Okoth's successor should emulate his works in promoting education among Kibra kids.

"Masomo ni ya muhimu nataka muelewe vilevile najua vijana hawajaenda shule ndo maana tunajenga technical college hapa langata na mashule hapa langata. Yule ambaye atachaguliwa lazima ashughulike mambo ya shule (Education is very important and this is why we are building technical institutes to equip our jobless youth and even Ken Okoth invested in education and whoever is elected must continue with that legacy),"Ruto said.

Former Harambee Stars player McDonald Mariga will fly Jubilee Party's flag in the Kibra by-election to be held on November 7.

Mariga is seen to be Ruto's candidate in the by-election despite the international footballer dismissing this claim on Monday after Jubilee Party vetting.

The footballer said he made the decision to try his hand in politics after thorough soul-searching and consultation with his family.

Kibra constituency seat fell vacant after the death of Ken Okoth on July 26 who battled with cancer.

“That's my decision and I'm not being pushed by anyone. There is no influence. I decided, together with the family, that I try it,” he said.

Four members of the Elections Board gave Mariga more than 80 marks out of a possible 100.
News
2 years ago