• Board removed the MD on grounds of fraud involving Sh4.5 million paid to an auctioneer 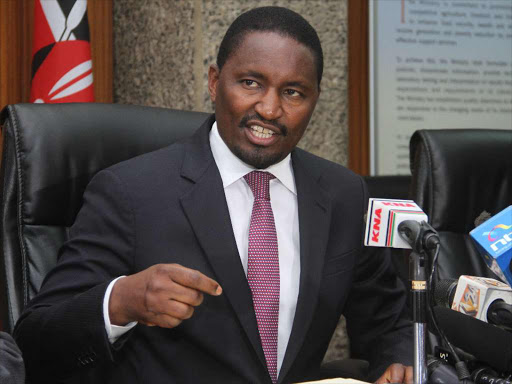 Tension is rife at the Agricultural Development Corporation board ahead of the release of a probe report on whether due process was followed in sacking a managing director.

The Inspectorate of State Corporations is expected to release the report on the removal of Richard Aiyabei and three others this week.

This has occasioned unease at the board, especially among members who fear the inspectorate may reinstate the sacked CEO.

A board member told the Star in confidence that the anxiety arises from fears the inspectorate may heed to concerns by Agriculture CS Mwangi Kiunjuri that due process was not followed in Aiyabei’s removal.

“With the ministry’s take on the MD’s suspension, there are high chances the fellow may return to the office to continue with the malpractices for which he was removed,” one of the members said at the weekend.

Kiunjuri, in his July 17 letter to the Inspector General of State Corporations, said the ministry was of the opinion the matter did not meet the expected threshold,  posing dangers of a suit.

“This matter has the capacity of thrusting the corporation and the ministry in an unnecessary and potentially expensive legal tussle,” the CS said.

Aiyabei was hounded out of office alongside Financial Controller Patrick Moturi on charges of fraudulent payment of Sh4.5 million to Nairobi county’s Njiru MCA Elijah Mputhia, the proprietor of auctioneering firm Warleen Traders.

The auctioneer was paid to collect a Sh59 million debt from ADC on behalf of Twiga Chemicals Industries Ltd.

Warleen was to collect the amount which was for the supply of herbicides procured by ADC on diverse dates between 2011 and 2015.

However, MMC Africa Law – acting for Twiga, withdrew the warrants from Warleen and appointed Bealine Kenya Auctioneers to collect the debt.

The law firm said Warleen failed to file proclamation notice adding that the company lacked Class B license, owing to its links to the MCA.

But the management settled on a Sh4.5 million deal with the delisted firm. It paid Sh3.5 million directly to Mputhia in January and the balance in February.

This prompted investigations by an audit committee chaired by former Rangwe MP Martin Ogindo. He is a board member.

The committee’s core mandate was to probe the manager’s culpability in the alleged fraudulent payment. It recommended that Aiyabei be sent on a three-month compulsory leave.

“Despite the MD and others being made aware by Mputhia that Warleen had no licence, they still went ahead to negotiate, authorise and approve payments,” the committee concluded.

Also roped in the case were former corporation secretary Antony Ademba, who has since resigned, and ex-legal officer Linda Kimathi.

But Ayiabei, in a joint letter with Moturi, protested to the Public Service Commission, saying the board removed them for not yielding to “demands for unjustified/unscheduled meetings”.

The two claimed that their trouble started after they opposed a three-day training for the board chaired by former Baringo Governor Benjamin Cheboi.

The two averred that having declined the request for funds for the training, they were accused of disrespecting the board and preventing it from executing oversight.

It was at this point that they were sent on compulsory leave. The only response they got from ADC was that the board had terminated their services.

“The board simply wants to get rid of us and have its preferred people in these key positions which they have been fighting for at all costs,” Aiyabei said.

“They made decisions which gravely affected us without a fair hearing and only capitalised on an issue with no legal basis.”

The two hold that in engaging Warleen as the debt collector, they acted prudently to avert attachment and further loss of ADC assets.

After their removal, the board appointed Mohamed Bulle as the acting MD, Morrison Andwati as financial controller (Ag) and Lilian Kosgei as Ag corporation secretary.

Officer, ADC manager and some staff had visited the land before attack.
News
3 years ago

Residents demand arrest of all those mentioned in the ADC land saga
News
3 years ago
Post a comment
WATCH: The latest videos from the Star
by MOSES ODHIAMBO Journalist and Political Writer
News
03 September 2019 - 00:00
Read The E-Paper