• Lorry driver was among those who died on the spot while scores of passengers in the 2NK matatu that was heading to Nairobi were injured.

• According to the chairman Naivasha Road Safety Association James Kabono, the lorry driver was to blame for the accident. 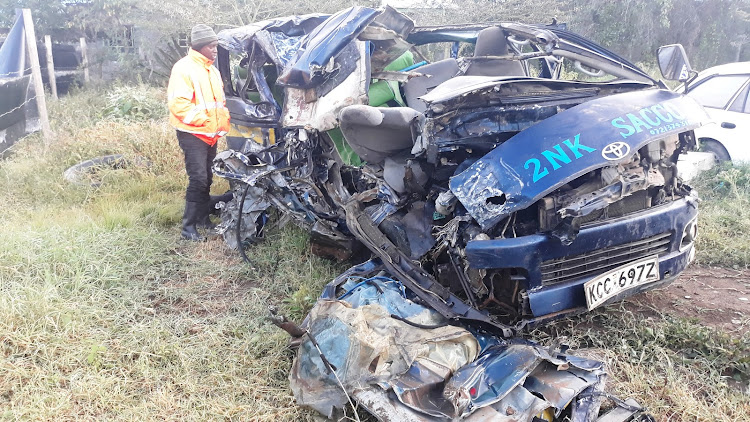 Road accident A member of the public views the wreck of a Nissan matatu that was hit by a truck in Nyakairu center Naivasha along the Nairobi-Nakuru highway leaving six people dead including the driver of the truck. The truck was overtaking a fleet of vehicles when it rammed into the matatu that was travelling from Nakuru to Nairobi.
Image: George Murage

Leaders and members of the public are now calling for a return of traffic officers to the road following a sharp rise in fatal accidents in the last couple of weeks.

This follows Saturday's night accident where six people lost their lives after Nissan matatu and a truck crashed head-on along the Nairobi-Nakuru highway.

The accident at Nyakairu centre 15 kilometres from Naivasha town occurred after the truck hit head on the incoming matatu killing five people on the spot.

The sixth died while undergoing treatment at Naivasha sub-county hospital.

According to the chairman Naivasha Road Safety Association James Kabono, the lorry driver was to blame for the accident.

He said that the driver left his lane while overtaking a fleet of vehicles and hit head on the incoming matatu.

"Five people died on the spot and scores of others were injured and rushed to Naivasha sub-county hospital," Kabono said.

For the last couple of days we have not had traffic officers in the road and as result drivers have been speeding and driving carelessly.

According to him, careless driving was to blame for the accident adding that it was time traffic officers who manned the highway returned to the road.

Naivasha East MCA Stanley Karanja said that it was time that speed bumps were erected on the black spot to reduce fatal accidents.

He noted that since the year began, at least six motorcycle operators had been killed by speeding motorists on the section of the road.

“It’s a sad day that we have lost six people in this accident which could have been avoided and it’s time traffic officers contained the speeding drivers,” he said.

Naivasha deputy OCPD John Kwasa confirmed the accident adding that the bodies of the six men had been collected and taken to the area mortuary.

“There was a fatal accident involving a Nissan matatu and a truck and six people died while nine others were seriously injured,” he said.

He called on drivers to be cautious adding that as per their data speeding and careless overtaking was the cause of major accidents on the road.