Naikuni said he learned of DCI’s intention from the media.

•Naikuni says he has never been involved in any graft since he was employed to his retirement.

•He said the claims being peddled through the media that laundering of money could have happened during his time at the helm of KQ have no basis. 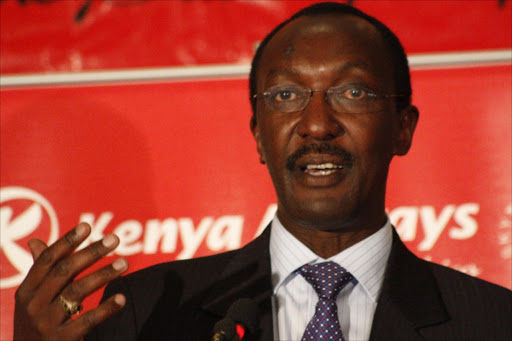 Former Kenya Airways CEO, Titus Naikuni on Saturday said he is ready to be grilled by Directorate of Criminal Investigations over the Sh100 billion loss at the Kenya Airways when he was the CEO.

Naikuni who spoke on phone from his farm in Bissil, Kajiado County, said he learned of DCI’s intention from the media.

“I am telling them I am one of the tallest Kajiado Maasai and therefore my height will help investigators not to miss out on me,” said Naikuni.

He said the claims being peddled through the media that laundering of money could have happened during his time at the helm of KQ have no basis.

“I joined employment soon after completing my university education in 1970 and from then I have never been involved in the graft of any kind. I am now in retirement and anyone wanting me, can come over to grill me under a tree in my farm,” said Naikuni.

Naikuni served in former President Daniel arap Moi’s regime’s dream team in the 1990s after he was picked by the State from Magadi Soda Mining Company where he served as MD.

After the government disbanded the dream team, former President Moi appointed him to serve as KQ CEO.

The Star on Saturday exclusively reported that DCI wants to know how and why the airline suffered huge losses when Titus Naikuni was CEO.

The Director of Criminal Investigations said had begun investigating whether Kenya Airways staff conspired to bring down the airline.

The DCI says it wants to establish how Kenya’s national carrier lost Sh100 billion between 2003 and 2014, the nine years during which former MD Naikuni was in charge.

“We are on this matter. We are working to unravel the looting that went on there,” George Kinoti, the DCI boss told the Star.

Forensic experts have already been deployed to comb through a mountain of company records and contracts with suppliers.

The probe was triggered by an audit report prepared by the audit firm Deloitte four years ago.

The scope of the investigation includes verifying whether KQ staff was complicit in a global money-laundering ring. The police suspect the money from the scheme could have financed terrorism in the region.

DCI wants to know how and why airline lost Sh100bn during Naikuni's tenure.
News
2 years ago
by KURGAT MARINDANY Correspondent
News
31 August 2019 - 17:49