It was the first time the anti-Sossion movement made good its threat initiating the ouster of the embattled secretary general.

• The plan yesterday,  was to strip Sossion off his powers as the SG and only maintain him as a ceremonial figure.

• Top among yesterday’s recommendations is to replace Sossion with his deputy Hesbon Otieno in acting capacity as the official union's spokes person. 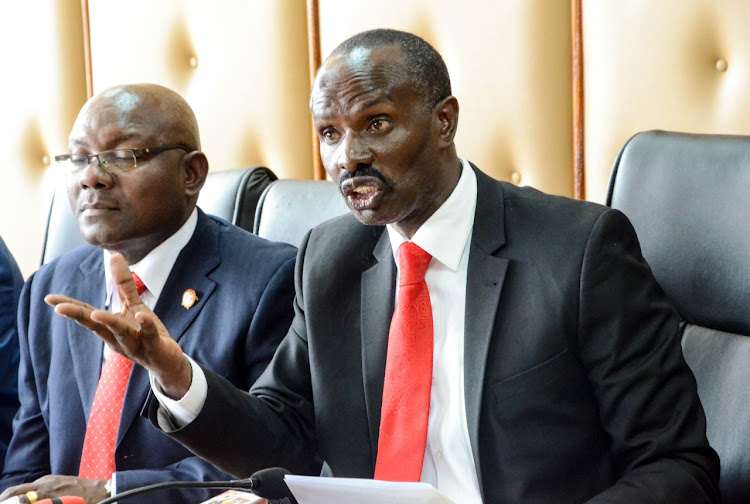 Embattled Kenya National Union of Teachers' secretary general Wilson Sossion yesterday escaped a plot to remove him from office when a section the union’s top organ met in Nairobi.

Those familiar with the development say that a section of the union's National Executive Council met at a Nairobi hotel on Thursday despite a court terming it illegal.

The meeting was chaired by Wycliff Omucheyi.

The plan yesterday,  was to strip Sossion off his powers as the secretary general and only maintain him as a ceremonial figure.

It was the first time the anti-Sossion movement made good its threat to remove the embattled secretary general but suffered a major set back.

The group sought audience of the registrar of trade unions at the Ministry of Labour who reportedly was out of town. Thus, they could not proceed with the proposed changes.

Top among yesterday’s recommendations was to replace Sossion with his deputy Hesbon Otieno in acting capacity as the official union's spokesperson.

This would cripple Sossion who awaits his fate in the upcoming annual delegates conference in December.

According to the sources, those in attendance of the contested meeting also signed documents seeking to bar Sossion from transacting any financial task on behalf of the union.

The development now exposes the deep divide at the giant union with only 22 members honouring the meeting out of the 37 members.

It also comes amid a threat from Sossion to call for a strike to protest salary deductions, a move that could be hit hard by the ongoing wrangles.

So too, the union is facing a possible financial crisis after The Teachers Service Commission failed to remit union dues for the second month in a row.

Schools reopen for the third term on Monday amid the tense situation and uncertainty as TSC continues dealing blows to teachers allied to the union.

Already, the union members have suffered deduction in salaries after a court case that ruled out the promotion criteria used by the employer since 2016 in the commencement of their Collective Bargaining Agreement.

The union’s constitution dictates that NEC is responsible for upholding rules and regulations of the union.

So too, they can suspend or expel a member of the union. The NEC council consists of the 10 elected members of the union’s national branch.

“Any national official of the union may be suspended from office by a two-third majority decision of all members entitled to attend and vote at the NEC,” the Knut constitution reads.

In the case of a suspension, NEC is vested with the powers to appoint one of its members.

The anti-Sossion group also staged a demonstration outside the union headquarters earlier on Thursday demanding his removal.

However, they were met with riot police who had to be called in to manage the situation from getting out of hand.

Those who spoke to the Star say the Sossion has lost the power to negotiate on behalf of teachers.

Sossion hits out at TSC over salaries

TSC had deregistered Sossion in January last year after he became a nominated MP.
News
3 years ago
Post a comment
WATCH: The latest videos from the Star
by LEWIS NYAUNDI Education Reporter
News
30 August 2019 - 00:00
Read The E-Paper