Embattled Secretary General Wilson Sossion could be ousted as a section the union’s top organ meet in Nairobi today.

• Some members of the National Executive Council recommended replacement of Wilson Sossion with Hesbon Otieno.

• The NEC members present have further presented documents to the TSC and the banks changing the name of Sossion as the signatory to the accounts. 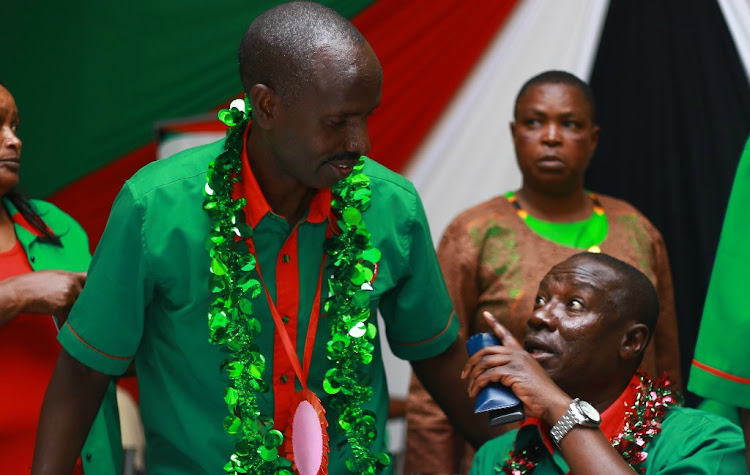 Embattled Secretary General Wilson Sossion could be ousted after a section the union’s top organ met in Nairobi.

Those familiar with the development indicate that some members of the National Executive Council met at a Nairobi hotel on Thursday despite a court ruling that declared the planned meeting illegal.

Top among the recommendations fronted by the group is to replace Sossion with Hesbon Otieno.

The members want Otieno to take over the union's mantle ahead of the December Annual Delegates Conference where they will conduct elections.

According to the sources, those in attendance of the contested meeting also signed documents seeking to bar Sossion from transacting any financial task on behalf of the union.

The group intends to present the document to the Teachers Service Commission and banks, to notify the parties that the SG is no longer signatory to the accounts.

The meeting took place at an undisclosed city hotel after Sossion on Wednesday directed the closure of the union's offices from August 28 to September 3.

Those allied to Sossion did not attend the meeting.

The anti-Sossion group also staged a demonstration outside the union headquarters earlier on Thursday demanding the removal of Sossion.

Riot police had to be called in to manage the situation from getting out of hand.

Those who talked to the Star say the SG has lost the power to negotiate on behalf of teachers.

Riot police had to be called in to manage the violent union officials.
News
3 years ago

Knut Central branch tells Sossion to quit or else...

The branch officials are opposed to the disbandment of TSC.
News
3 years ago

The government is planning to have top officials of the teachers union removed during the December delegates conference, secretary general Wilson ...
News
4 years ago
Post a comment
WATCH: The latest videos from the Star
by LEWIS NYAUNDI Education Reporter
News
29 August 2019 - 12:46
Read The E-Paper