• He will face ODM and Jubilee party candidates for the seat which was left vacant after the death of Ken Okoth who succumbed to cancer. 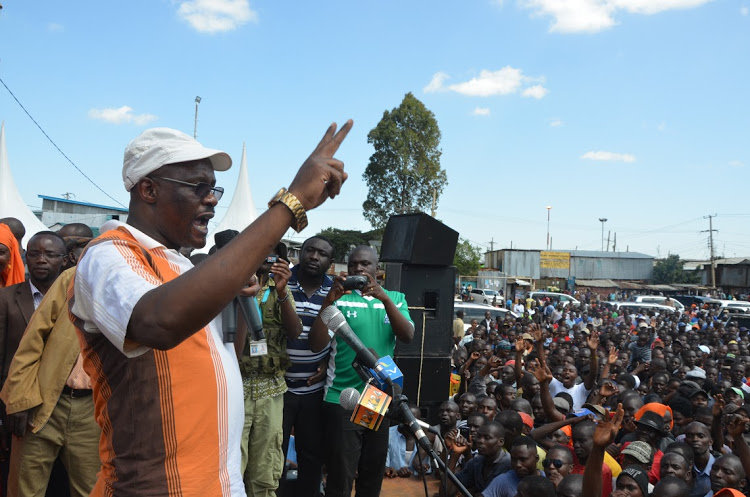 Eliud Owalo during a past rally in Kibra.
Image: FILE

The Amani National Congress party has unveiled Eliud Owalo as its candidate for the upcoming Kibra constituency by-election.

Owalo was former ODM leader Raila Odinga's aide and was also in NASA's secretariat in the run-up to the 2017 election.

Owalo resigned from ODM on August 23, through a letter to ODM Secretary General Edwin Sifuna and the Registrar of Political Parties.

He had said that his resignation should be followed by an instant removal of his name from the ODM Partry Membership Register.

"It is with great regret that I write to inform you that I have with immediate effect relinquished my membership of the ODM Party," read part of his letter.

"My resignation is informed by the fact that my political ideology, convictions and belief no longer has convergence or depict and congruence and common denominator with that of the ODM party, its value orientation and practices."

Owalo unsuccessfully contested for Kibra seat in 2013 elections but his ambition was cut short after he lost in the party's nominations.

He will face ODM and Jubilee party candidates for the seat which was left vacant after the death of former MP Ken Okoth who succumbed to cancer.

IEBC has scheduled the by-election for November 7, 2019.

Owalo said there was no enthusiasm remaining in him to warrant his stay in the party.
News
3 years ago
by KEVIN CHERUIYOT
News
28 August 2019 - 14:17