All genders equally represented in line with Constitution

• Foreign Affairs CS Monica Juma on Friday said she was proud to have graduated 12 women in the new cohort of Kenyan diplomats in line with “President Uhuru Kenyatta’s commitment to the women empowerment agenda”. 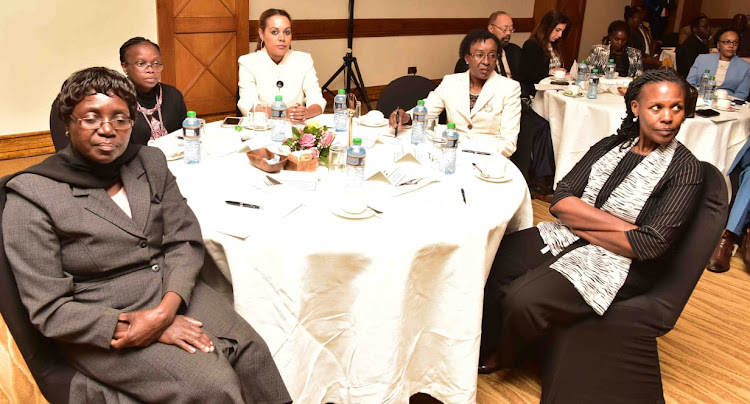 Some of the newly appointed women diplomats when they met Deputy President William Ruto on August 26 in Nairobi
Image: DPPS

Twelve women are among the trained 34 diplomats appointed in July, meeting the two-thirds gender rule provided in the Constitution, at least in this cohort.

“Kenya recognises that women and the youth play a significant role in maintaining peace and security. We are promoting their inclusion as agents of peace and development," Deputy President William Ruto said yesterday.

"Already, 12 women envoys are part of the cohort of trained ambassadors and high commissioners designate," the DP said when he met the envoys in Nairobi.

The National Assembly in June adopted a report tabled by the Defence and Foreign Relations Committee, which vetted seven nominees for the position of high commissioners and ambassadors, but with a disclaimer on Mwinzi’s approval.

The report recommended the appointment of Mwinzi as the ambassador to Seoul, on condition that she renounces her US citizenship. It is not yet clear whether she did so.

"Kenya is counting on you to serve with precision; to spot, interpret global developments and trends as they happen. We are counting on you to contribute to setting Kenya and Africa on a high growth trajectory while promoting and defending our interests and those of our continent," Ruto told the diplomats.

Foreign Affairs Cabinet Secretary Monica Juma on Friday said she was proud to have graduated 12 women in the new cohort of Kenyan diplomats in line with President Uhuru Kenyatta’s commitment to empower women.

She spoke during the conclusion of the induction course of ambassadors and high commissioners designate. The training was conducted by the Foreign Service Institute, now renamed academy, which is headed by Ambassador Simon Nabukwesi.

The training is a tradition for new entrants. They are taught on Kenya’s foreign policy and diplomatic courtesies for at least 60 days, among other areas of interest.

Kenya is, however, still struggling to achieve gender parity in both electoral and appointive positions.

Article 81 (b) of the Constitution states: “Not more than two-thirds of the members of elective or appointive bodies shall be of the same gender”.

Only Kenyans can tell the country's story effectively
News
3 years ago
Post a comment
WATCH: The latest videos from the Star
by ELIUD KIBII Subeditor and writer
News
26 August 2019 - 18:06
Read The E-Paper