• Ex-MP William Murgor left a vast estate including more than 2,000 acres of agricultural land in the North Rift

• His daughters led by Enit Murgor are seeking a share of the estate saying they had been sidelined. 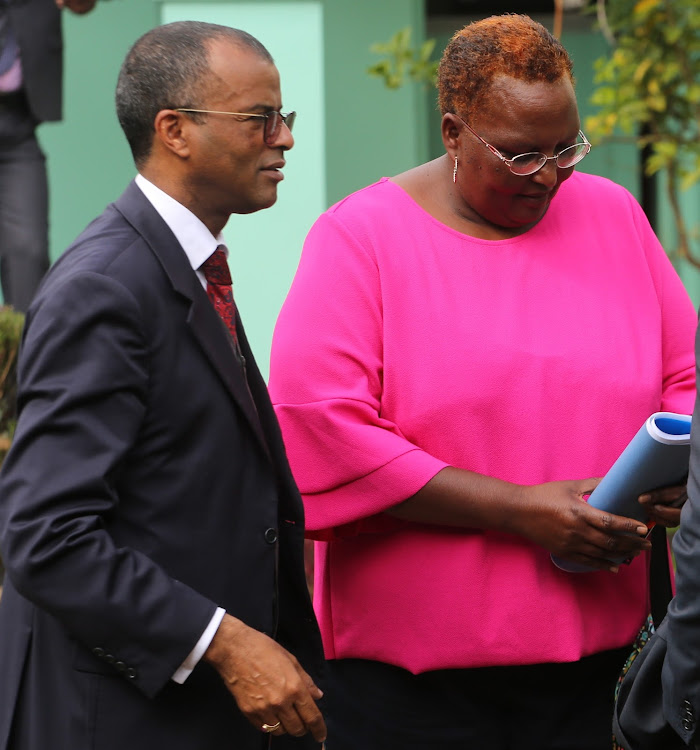 Lawyer Phillip Murgor with Enit Murgor (no relation) who is daughter of ex-MP William Murgor at the High Court in Eldoret on June 28
Image: MATHEWS NDANYI

Thirty-five children of former MP William Murgor have inched closer to an out of court deal on how to share his more than Sh2 billion estate.

The children met at the High Court in Eldoret yesterday for mediation talks and indicated that there was progress in efforts to resolve their dispute over their father’s wealth.

Despite past animosity because of the dispute, they were seen embracing and hugging inside the courtroom where the closed-door mediation is taking place.

Family members including Keiyo North MP James Murgor have agreed to handle the dispute through a mediator.

The late Murgor served as MP for Kerio Central before he died 10 years ago.

Murgor, who was buried at his Kapkoi home in Elgeyo Marakwet county, left behind five widows and 35 children among them 10 boys.

His daughters through lawyer Murgor filed a suit at the High Court in Eldoret protesting that they had been sidelined in the sharing of his estate.

The succession is being presided over by Justice Hellen Omondi who had referred it mediation and urged the family members to negotiate out of court.

The mediation process is being chaired by lawyer Kadina Robert whose name was presented at the High Court by the family members.

They had differed over the estate which includes large tracts of land measuring more than 2,000 acres in Uasin Gishu and Elgeyo Marakwet and commercial plots in Eldoret.

Some of the deceased’s daughters argued the administrator of the estate had left out some of the family members.

In a suit filed by Enit Murgor on behalf of her siblings, they have accused the MP of being biased against his stepsisters and brothers in the sharing of the estate.

Enit in her court documents said the distribution of her father’s wealth had been done in total disregard of Keiyo customary laws which require such wealth in cases of polygamy to be shared out among all family members.

“He favoured his own family to the extreme detriment of other households yet as siblings we are all entitled to get a share of the property,” Enit said.

Enit lives in the United States but twice this year has flown back into the country for the hearing of the case.

“The distribution does not provide adequately for all known beneficiaries and in particular has left out two sons of the deceased, namely Ambrose Murgor and Oscah Murgor,” Enit said.

But one of the sons, Francis Murgor, told the court the distribution of the assets had been done as per the will of the father.

The will was however disputed in court by the daughters who claimed it was not genuine.

“Now that the matter has been referred to a mediator we are happy because we are now talking to each other so that we reach an amicable solution", Francis said.

The mediation process will resume on September 6.

Phillip Murgor and his brothers battle over late dad’s property

Former Director of Public Prosecutions Philip Murgor is caught up in a family row over the sharing of his father’s estate, valued at more than Sh2.8 ...
Counties
3 years ago

Thirty-four children of former Rift Valley politician William Murgor are battling in court over his vast estate valued at more than Sh2 ...
Counties
3 years ago
by BY MATHEWS NDANYI
News
21 August 2019 - 00:00