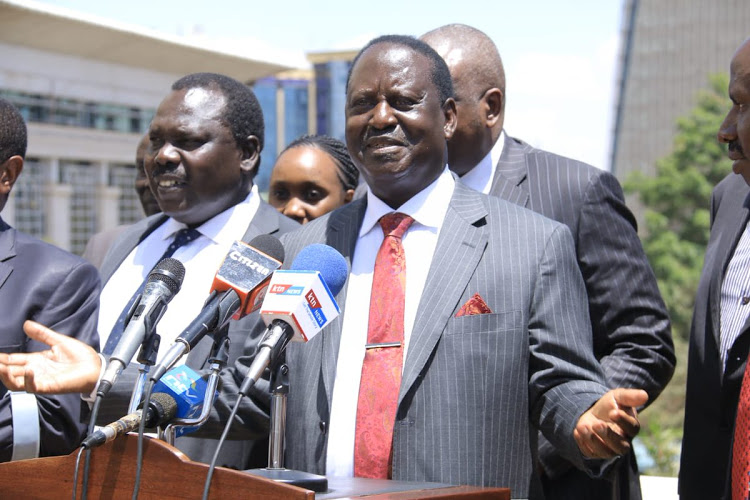 ODM Raila Odinga speaks during a past briefing at his Capitol Hill Office.
Image: FILE

Is a Jubilee Party MP from Nairobi county planning to use Raila Odinga’s Orange Democratic Movement to seek a higher office in the 2022 general election? Those in the know tell Corridors that the man, who is known to speak his mind and a critic of Nairobi Governor Mike Sonko, has made up his mind that for him to capture the seat, the only viable party will be ODM. It seems the handshake between President Uhuru Kenyatta and opposition chief Raila raised the legislator's hopes. He has made a sharp U-turn from his previous attacks on the opposition leader.

Chief officers and County Executive Committee members of a county in Western Kenya are grumbling in secret over the way their boss treats them in public during official functions. A chief officer told Corridors that the governor is in the habit of reprimanding them in front of residents and county guests. Sometimes the governor takes a roll call and announces that the absentees must be informed to report to his office to explain themselves. The officer said they just want the governor to treat them with a little respect and not like schoolchildren.

The month-long recess has come as a breather to an MP pursuing a law degree in one of the high-end universities in town. Both Houses of Parliament are out for the long recess until September 9, when normal sittings will resume. Corridors has learnt that the MP reports to work at 8am daily and locks himself in his office revising intensively for exams said to be starting soon. The fear of getting a supplementary is said to have sent chills down the spine of the lawmaker, who in the last semester survived by a whisker.

A governor made headlines in recent years for awarding his relatives county tenders worth millions of shillings. Corridors has learnt that the governor is at it again. This time he has dished out to an in-law a number of multimillion-shilling tenders even before she finishes the initial one which caused friction in the county. Senior officials questioned the contract which, according to them, does not add value to the common man or address the many challenges the constituents face.