• The ADC farm was dished out to top-ranking Kanu officials, among them retired President Moi's nephew and Cabinet ministers 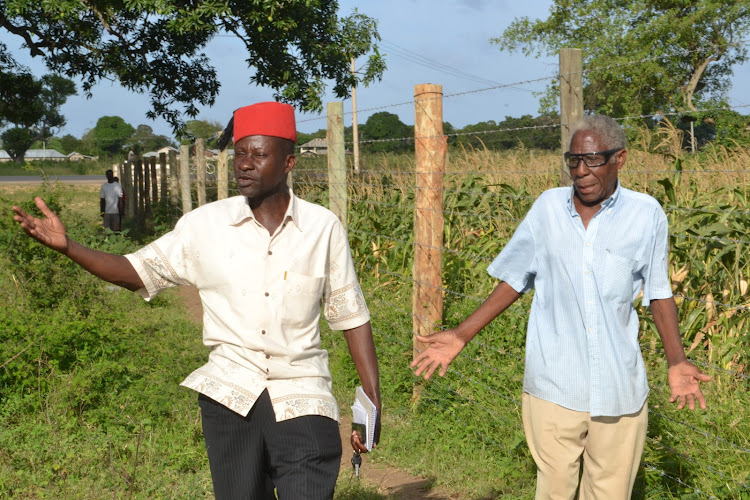 Sabaki residents demand grabbed ADC land back Sabaki Ward residents in Magarini constituency now want the government to give them back their 1300 acres of ADC land grabbed by tycoons to enable them to get ownership documents.
Image: Alphonce Gari

The EACC has 90 days to initiate the prosecution of those who illegally subdivided and parcelled out the ancestral land of Sabaki residents to private developers.

There is sufficient evidence that the locals were defrauded of their land, the parliamentary Lands committee chaired by Rachael Nyamai (Kitui South) said.

The committee directed the National Land Commission to revoke the illegally acquired titles, some of which are held by the ‘who-is-who’ in the country.

The MPs, who have been probing the matter, said the property – registration numbers 540, M53, M3B, and LR 5061, was held in trust by the Agricultural Development Corporation (ADC) through a company known as Lands Limited.

The investigations followed a petition to Parliament by Magarini MP Michael Kingi.

The MPs found out that the land was subdivided and sold without the ADC or Lands Ltd board’s approval. Some of the parcels are already sold to third parties.

The committee found that chunks of the 990-acre parcel were allocated to powerful Kanu politicians.

“The EACC should expedite and conclude investigating all persons who may have been involved in illegally disposing of of the ADC land, and recommend prosecution to the DPP,” the committee report reads in part.

MPs further want NLC to investigate the injustices and order the revocation of title deeds in cases where it establishes there is a valid claim.

The landowners failed to present ownership documents as ordered by EACC through a gazette notice of December 2018.

The lands agency had also asked the title deed holders to present the proof to NLC offices in Nairobi for verification but none turned up.

The Nyamai team held that the petitioners had a valid historical land injustice claim, having occupied the land before independence.

“They were dispossessed of the land during the colonial era to pave the way for the establishment of Kisima Farm by a foreign national without compensation,” the MPs concluded.

In 1976, the government repossessed the land from the foreigner and reallocated it to ADC.

The corporation initiated the controversial sale after it ran out of cash to restock the Galana Ranch, which was the source of animals for ADC’s Kiswani Butchery in the 1980s.

The then managing director, W.K. Kilele (deceased) in a “note for the file” memo of  January 1994, said the corporation needed money badly.

He (Kilele), therefore, went to State House and secured President Moi’s nod to proceed with the sale.

The committee faulted the sale and reprimanded the NLC for taking more than three years to conduct an inquiry into the land grabbing claims.

It was suspicious that the commission issued a notice for verification in 2018 when it had no power to review grants and titles.

“We note with concern the inordinate delay by the EACC and NLC to investigate the allegations of irregular allocation of ADC land despite receiving the complaints in 2010 and 2014 respectively,” the report reads.

The lawmakers also want the Lands registrar to promptly place restrictions on the ADC Kiswani farm to guard against further illegal disposal.

Says ADC has sold all of it to private developers
Counties
3 years ago
Post a comment
WATCH: The latest videos from the Star
by MOSES ODHIAMBO Journalist and Political Writer
News
17 August 2019 - 00:00
Read The E-Paper